The Daily Nexus
Music
First Lady of Folk Joan Baez Sparkles at Arlington
November 10, 2016 at 5:00 am by Tamara Luechinger

Lights dim, spotlights focus and she steps on stage, donning a “Nasty Woman” T-shirt, a red bandana scarf and a smile that prompts thunderous applause. At 75 years old, Joan Baez appears as effortlessly cool as she did when she rose to fame in the 1960s as the next great American troubadour. Now, a Grammy Lifetime Achievement Award holder and Rock & Roll Hall of Fame Nominee, Baez continues her contemporary folk rock legacy, most recently performing at downtown Santa Barbara’s Arlington Theatre. There’s no question that Baez’s command of the stage is nothing short of powerful, for after a quick greeting, she strums her guitar, allowing the entire room to melt into its seats, a collective release of tension.
Baez led with a rendition of the song “Love Is Just a Four-Letter Word” by the musician she helped bring to fame, Bob Dylan. She joked that she would sing a few Dylan songs in light of it being “Bob Dylan appreciation month,” referencing his recent Nobel Prize in Literature. Vocally, Baez fluctuates between her signature soprano trill and a mature, light, husky tone. The familiar tune prompted many audience members who had come with their significant others to cuddle up to her sweet and sentimental serenade.
Joining her onstage was her band, who appropriately entered wearing “Bad Hombre” T-shirts to accompany Baez’s own wardrobe, which was the first of many 2016 election references of the night. The team consists of Dirk Powell, who played a variety of stringed instruments throughout the show, and Baez’s only son, Gabriel Harris, who provided percussion. “Turns out she can sing,” Baez said of her personal assistant, Grace Stumberg, whom she also invited on stage to accompany her through backing vocals and little duets. The talented bunch even did so well as to steal the spotlight from Baez at times, especially in the case of Stumberg, whose impressive belt brought a modern complexity to the music. 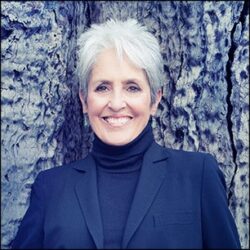 Courtesy of Arts and Lectures

Kathryn Krebs, a Santa Barbara local, reminisces “[going] to the county Bowl when the lawn seats were $5. I saw her when she played for Cesar Chavez and the farmworkers.” Another audience member, Martha Donovan, expressed her love for the song “Deportee,” claiming, “It’s so appropriate now.” Baez, who is of Mexican descent, obviously agreed, as she placed heavy importance on the song before performing it. Her version is touching, tender and a perfect example of how her music immediately impacts the audience, as it left Donovan dabbing tears from her eyes. Powell, Baez’s accompanist, targeted the crowd, mentioning that if the song strongly resonated with anyone, he urges them to vote in the upcoming election. In particular, he promoted his stepmother, Joan Hartmann, who was recently elected Third District County Santa Barbara supervisor.
Baez, whose setlist flows through personal anecdotes of her journey to musical recognition or her social activism, continued with songs such as “Prison Trilogy,” which she penned when her then-boyfriend, David Harris, who was arrested for resisting draft in 1969. Today, the song continues to hold significance to Baez as she revealed her tour is in conjunction with the Innocence Project, a program that, according to its website, “exonerates the wrongly convicted through DNA testing and reforms the criminal justice system to prevent future injustice.” Baez even recounted the inspiration she drew from visiting a man who had recently been acquitted after 28 years in prison and his outlook on life. “He’s not bitter,” she said before claiming that it’s cases like those that call us to, as the song says, “raze the prisons to the ground.”
She went on to perform many favorites such as “She Could Never Resist A Winding Road,” “Me and Bobby McGee” and “Do Right Woman, Do Right Man.” Her most stunning part of the set, however, was the haunting “Diamonds and Rust,” an entirely dark acoustic performance, set in front of an ethereal and foggy background that left me with chills down my spine. Baez, who seems to find the humor in all of her music, tweaked the end of the song by adding, with a devious twinkle in her eye, “if you’re offering me diamonds and rust … Well, I’ll take the diamonds,” before nonchalantly taking a sip of tea, as the audience roared with cheers and laughter.
As the concert progressed, it became obvious that for many, Baez’s music brings forth a collection of memories of youth and rebellion. The messages of the music, while more common nowadays, were themes that began a revolution for many of the adults that sat in the theater that night. “I grew up with Joan Baez. She represents all of the angst of growing up,” Krebs affirmed. Donovan added, “I first saw her in eighth grade. I snuck into this little club in Los Angeles, and I remember thinking, ‘We need more people like that in our world.’” Others discovered identity and individuality through the music. Debra Stanfield, who saw Baez live for the first time that night, talked about how Baez helped “develop what [she] believed about society.” Adding to her sentiments, Stanfield concludes that Baez influenced her as a person, because her songs “related to the needs that people had. I’m a psychotherapist, so I guess I found some personal meaning from her.”
To round off the night, Baez answered the demand for an encore with a rendition of the traditional gospel standard “Swing Low Sweet Chariot.” The stage was a modern echo of her famous performance of the song at the legendary 1969 Woodstock festival. Likewise, the Arlington Theatre was transported to a dimension of nothing but “peace and music.”