After 10 days off thanks to a first-round bye in the Big West Tournament, the UCSB men’s soccer team will host Fullerton this Wednesday with a spot in the conference championship on the line. 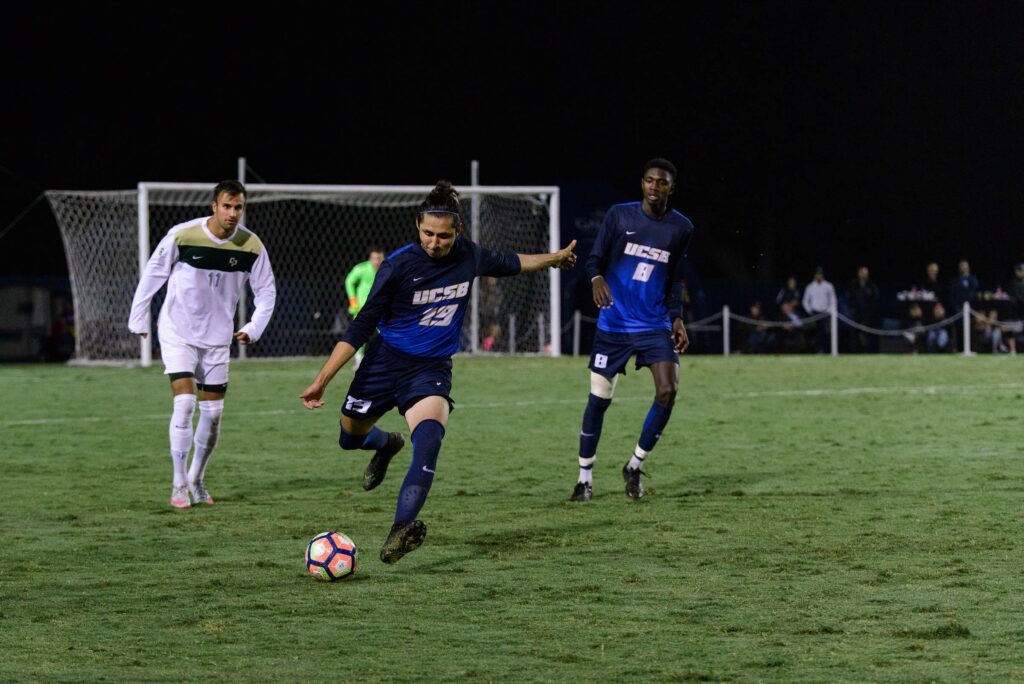 After meeting in the conference final in 2015, Wednesday’s game entails some rival tones, adding, even more, intensity to the do-or-die match. Last season the Titans knocked off the Gauchos in the championship by a score of 1-0 to claim the Big West crown.

The top-seeded Gauchos are hoping to reclaim the conference title for the first time since 2010.

The Gauchos eased through the regular season, finishing with a 10-6-3 overall and 6-1-3 Big West record. They endured their lone league loss in the last match to UC Davis just three days after winning the North division and clinching the top record in the conference.

Fullerton travels to Harder following a penalty shootout win over the Aggies in the first round after finishing the season second in the South division at 9-8-4 overall, 4-3-3 in the Big West.

“Last year they beat us and lifted the trophy in front of our crowd, in our stadium,” junior midfielder Kevin Feucht said. “We outshot them something like 23-3, so we want a rematch now.”

UCSB enters the meeting as clear favorites after a near-perfect Big West season, and the team’s dominance in recent weeks was recognized over the weekend when the conference released its annual All-Big West Awards.

The Gauchos had nine players honored, led by senior forward Nick DePuy, who won the Offensive Player of the Year for a third straight season, and junior midfielder Kevin Feucht was named the Midfielder of the Year.

Attackers junior Ahinga Selemani and senior Josue España were the other two teammates named to the All-Conference First Team to go along with three Honorable Mentions and three All-Freshman mentions. UCSB was the most represented side in the league in the regular season awards.

“It shows that we have strong players and a quality team,” Feucht said. “It goes to show how much we’ve found each other this year, and we were unbeaten until the last game in conference so we’ve shown we’re a good team.”

Nonetheless, Cal State Fullerton had its fair share of match-winners too. Senior striker Alex Heilmann leads the Big West with 11 goals and was one of three Titans named to the All-Conference First and Second Teams. The other First Teamer, senior defender Ricardo Covarrubias, anchors the Big West’s best back line, as CSUF have allowed a measly 1.12 goals per game.

The other First Teamer, senior defender Ricardo Covarrubias, anchors the Big West’s best back line, as CSUF have allowed a measly 1.12 goals per game.

In hopes of countering the Titan’s sheisty defense, the Gauchos bring plenty of firepower up top, averaging 1.58 goals for almost 0.3 goals per game more than CSUN, the second most prolific offense in the conference.

Much of the threat comes from the trio of Selemani having tallied seven goals, DePuy with six and Feucht rounding things out with 10, whose interchanging runs in the front have picked open Big West opposition all season long. España leads UCSB with seven assists.

“You have to ask me after the game whether we’re the best offense or they’re the best defense,” Feucht said. “We have to play to find out.’

When the two teams faced off earlier this season at Fullerton, the host gave the Gauchos a tough match, but the visitors ended up heading back to Santa Barbara with a 2-1 overtime win thanks to Kevin Feucht’s match winner on an assist from España. The Gauchos star-studded attack will pose the sternest test Fullerton has faced in weeks.

As for injuries, all of the regulars are healthy for UCSB, and the highly promising freshman midfielder Daniel Amo, who has missed most of the season with a groin injury that he aggravated again at home against Cal Poly.

Amo is hoping to fight back into the team as the postseason picks up. His injury against Poly was far less serious than his first setback of the year, keeping him out of training for a couple weeks, but the first-year product has a chance to come back into the squad in the next match.

The semifinal will take place at Harder Stadium on Wednesday, Nov. 9 at 7 p.m. Follow @thenexus_sports for all things Gaucho soccer.