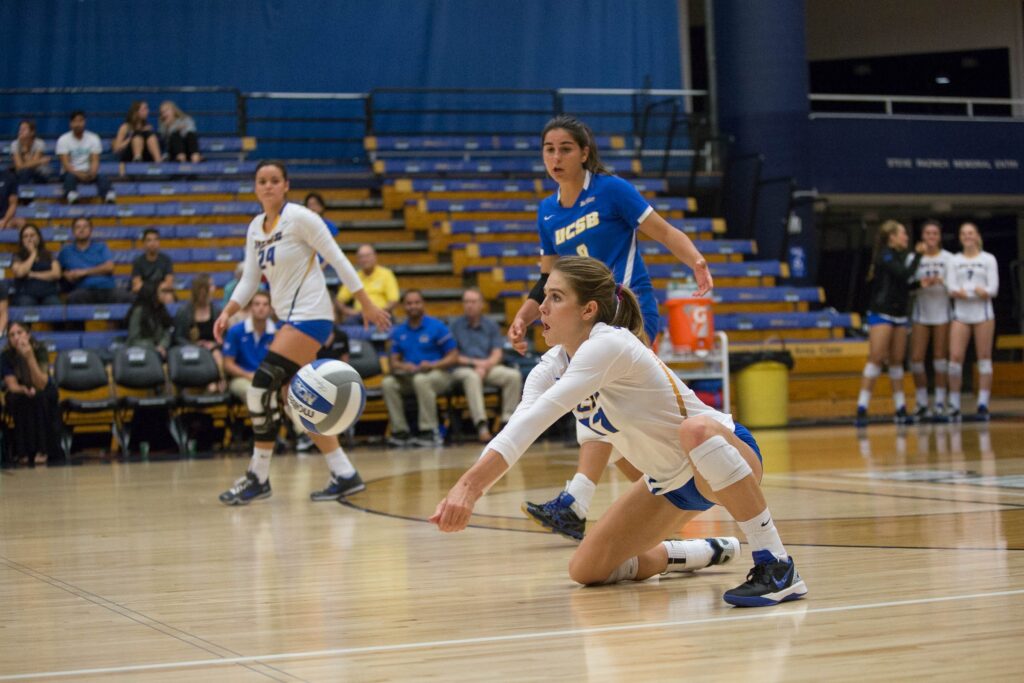 After kneeling on the line, Devin Joos passes a down ball. Dustin Harris / Daily Nexus

Friday’s match against UC Davis saw UCSB lose the first two sets, neither of which were particularly close by the end.

In the first frame the Gauchos were marred by errors, racking up 10, the most of any set for both teams on the night. Their .029 hitting percentage looked even worse against the Aggies’ .400 mark, and they would go on to lose by 10 points despite first-year outside hitter Megan Rice’s four kills.

Although the Gauchos got out to an early lead, a 6-1 Davis run would put the Gauchos in a 9-12 hole, and they weren’t able to close the gap under two for the remainder of the set.

Facing an end to their recent hot streak, the Gauchos launched their comeback in the third set when an 8-9 deficit became a 16-9 lead, aided by seven straight Ruddins serves.

A Ruddins service ace pushed the lead to two, tying the second highest lead to that point in the set, and a kill from Elizabeth Sheffield resulted in a UC Davis timeout.

They would find no help in the respite, however, as an attack error from sophomore outside hitter Brianna Karsseboom, followed by two Ruddins service aces and another Sheffield kill, capped the stretch at 16-9 UCSB, a buffer that would extend throughout the set.

UC Davis would not go down easily in the fourth set, as three kills from first-year outside hitter Lauren Matias contributed to a five-point run that would tie the game at 12.

Despite the burst, UCSB would never trail again, as a continuous back-and-forth culminated with two kills from first-year outside hitter Chloe Allen and a 25-23 Gaucho victory.

UCSB controlled the tiebreaker, hitting a whopping .538 and winning 15-6, as after the Aggies took a 2-0 lead to start, a 12-3 run by the Gauchos would essentially seal the match.

The comeback from a two-set deficit was enabled by a career evening from outside hitter Chloe Allen, whose 19 kills, .394 hitting percentage, six digs and two block assists were massive for the Gauchos, especially as junior outside hitter Chanel Hoffman went down with an injury in last week’s match against Cal Poly and was unable to play against Davis.

Lindsey Ruddins and Elizabeth Sheffield were also both rocking on the offensive end with 16 and 14 kills respectively. Ruddins added three service aces as well as 10 digs to give herself a double-double, and Sheffield continued her consistent efficiency, hitting .481 on the night.

Hannah Juley led the match with 40 assists and completed a double-double of her own with 11 digs, extending her streak of outstanding play that has coincided with the Gauchos’ recent run.

The Aggies had five players finish with at least eight kills, paced by senior outside hitter Kendall Walbrecht with 11. Their setters, sophomore Maddie Merlino and senior Sophia Mar, combined for 43 assists, as the two setters’ attack potency was on full display Thursday night.

UC Davis outside hitters first-year Lauren Matias and sophomore Emily Allen collected 11 digs each, completing double-doubles with their kills, and Sophia Mar’s 11 digs also gave her a double-double for the match.

Saturday’s match with UC Irvine was substantially less dramatic, exemplified by the Gauchos outhitting the Anteaters by at least .050 in each of the three sets.

The first set was the match’s closest, as despite holding a three-to-four-point lead for the majority of the frame, the Anteaters were able to get a couple big scores and pull within two when faced with game point 24-20.

An attack error on senior setter Shelley Anderson would seal their fate, however, as UC Irvine couldn’t capitalize on what would be their high watermark of the evening.

The second and final sets would play out similarly to one another, as both began with decent competition between the two teams; they were tied at 11 in the second, and the Gauchos held an 11-10 run in the third.

Massive runs in each game by the Gauchos would follow in each set, however, and neither featured any substantial late-set drama.

Ruddins was huge for the Gauchos in this one, with 15 kills, eight service aces and nine digs, almost completing a triple-double. Megan Rice, Chloe Allen, Elizabeth Sheffield and senior middle blocker Phoebe Grunt would all assist her offensively, chipping in at least seven kills apiece.

Libero Emilia Petrachi turned in a brilliant performance with 20 digs (6.67 digs per set), and set the tone for what was an unstoppable Gaucho defense. Sheffield assisted in three blocks, and Hannah Juley and Sydney Bast added seven and 11 digs respectively.

No one on UC Irvine was able to amass double-digit kills, though junior libero Luna Tsujimoto led the match with 22 digs.

Setter Shelley Anderson was also potent for the Anteaters, her 27 assists a team high and second in the match only to UCSB’s Hannah Juley, who finished with 10 more.

The Gauchos will try and push their winning streak to five next weekend at home, with Friday and Saturday matches against Cal state Fullerton and UC Riverside, respectively. Both matches are at 7 p.m.