Cheers amplified throughout the Thunderdome Sunday evening as the UCSB women’s basketball team cruised to its 90-53 exhibition victory over Cal State Los Angeles. A total of four Gauchos ended the game with double figures in points, helping contribute to UCSB’s 48.4 field goal and 38.5 three-point percentages. 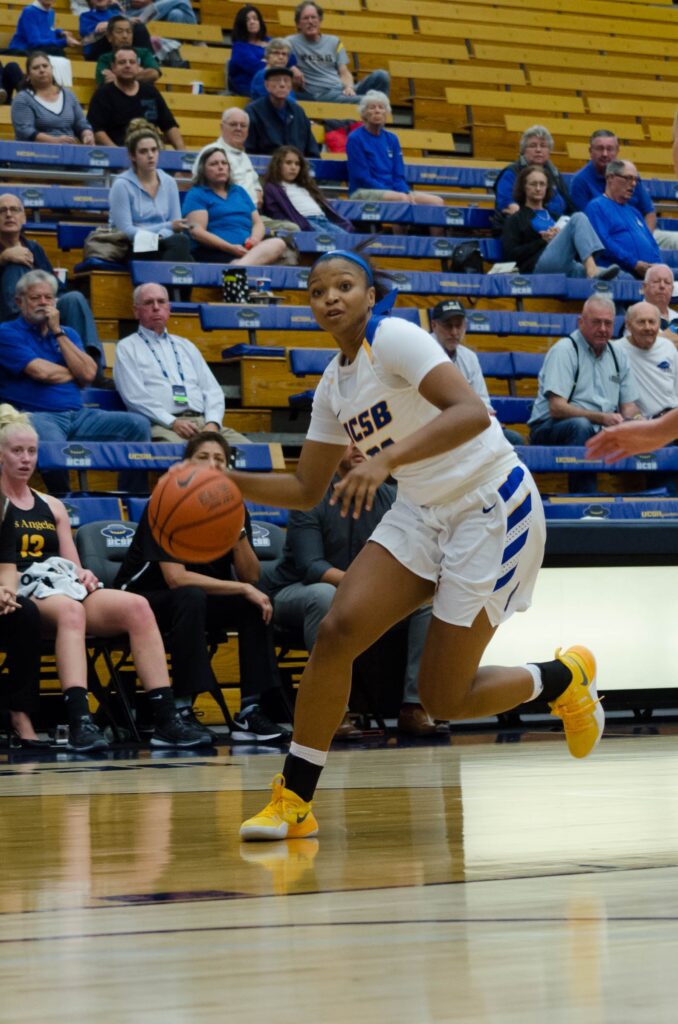 “In practice we all play with each other, [there’s] so many rotations,” said Toler. “We get that chemistry, so when we’re on the court it doesn’t matter if you start or not. You know who is on the court with you and how to get them the ball.”

With a focus this offseason to improve the team’s pace of play, the Gauchos’ work was evident as they played to an up-tempo beat.

Santa Barbara capitalized on defense, stifling the Golden Eagles’ offense in points off turnovers 23-3. CSULA shot 32.8 percent on a 19-58 shooting effort and 25 percent from behind the three, going 5-20 from deep.

UCSB managed to establish its quicker play on the offensive end, embarking on a 7-0 run in the game’s opening minutes. Making her presence felt and appearing in her first game as a Gaucho after transferring from USC was redshirt junior Drew Edelman.

Listed as a forward on the team’s roster, Edelman started at the center position instead and had success in the paint. She scored six of the Gauchos’ first nine points en route to ending the game with a double-double of 10 points and a tied game-high total of 10 rebounds in 20 minutes.

The Gauchos’ scoring stretch in the game’s early minutes led to a Golden Eagles timeout. CSULA benefited from the quick break, going on a 7-2 run of its own to trim UCSB’s lead to 9-7.

Igniting the Golden Eagles’ scoring charge was a three-point make by sophomore guard Christine Delapina. Bringing the team within two points was a layup by freshman guard Da’Jah Jackson, who led CSULA in scoring, rebounding and steals with 12 points, five rebounds and two steals.

Despite coming near, the Golden Eagles were unable to ever tie or take the lead as UCSB registered its best shooting quarter of the night in the first. It shot 11-16 from the field for a 68.8 percentage and 3-6 from long distance.

The efficient shooting occurred during the Gauchos’ 20-4 run to close out the first period. Setting the stage for UCSB’s scoring outburst was sophomore guard Coco Miller. Able to halt CSULA’s surge with a three-pointer to give UCSB a 12-7 lead, Miller’s make from deep was the start to the Gauchos’ rout.

Miller concluded the night 5-10, 3-8 from deep for 14 points alongside five rebounds and two steals.

With 10 players getting at least five minutes of play in Sunday night’s game, the Gauchos’ depth was on full display. Although its shooting stroke seemed nearly flawless, UCSB’s high-scoring performance resulted from its initial plan to attack the paint.

“We started the game by throwing it to Drew,” said Head Coach Bonnie Henrickson. “You have to be good around the rim because then it forces ‘are you gonna guard the rim or are you gonna give us threes?’ That stretches the defense, but if you can’t be good around the rim, you’ll stretch it then can’t do anything. [For] every really good team, if you’re good right there you have a chance, especially if you put three-point shooters around the outside.”

Achieving the drive and kick game plan was no issue for UCSB as it consistently penetrated the paint, sucking in the Golden Eagles’ defense, then converted with three-point makes.

Unafraid to shoot the ball when given the chance was the team’s leading scorer Porter. She went 5-11 from behind the three-point line; just two of her total seven field goals were inside the line to cap off a near double-double with eight rebounds.

Either driving to the paint for layups or to dish the ball to the perimeter were Toler and senior guard Onome Jemerigbe. Along with Toler’s assists, Jemerigbe chipped in six dimes of her own to go with just one turnover. UCSB doubled the Golden Eagles’ amount of assists 20-9.

Also helping the Gauchos spread the floor and get the ball to their shooters was their advantage in rebounds. They outrebounded CSULA 54-33. Tying with Edelman for the lead in rebounds was junior small forward Taylor Farris with 10.

Although Sunday’s game was only an exhibition, it was an encouraging performance for UCSB heading into its season opener this Friday. It reached the 90-point mark just once last season in a 93-78 win over Morehead State and was one point shy against La Verne.