The Daily Nexus
Opinion
An Effort to Humanize Trump Supporters
November 7, 2016 at 5:00 am by Laurel Rinehart

We’ve all heard it a thousand times before: In a dorm lounge, a gathering of friends or maybe a classroom setting, the conversation turns to some ridiculous idea or notion no one in their right mind would actually believe to be true. Someone in the group begs the question, “Who would actually think that way?” After a few seconds of consideration, another individual inevitably steps up and declares in a mocking tone, “I don’t know, probably Trump supporters!” Without missing a beat, the whole group bursts into laughter. 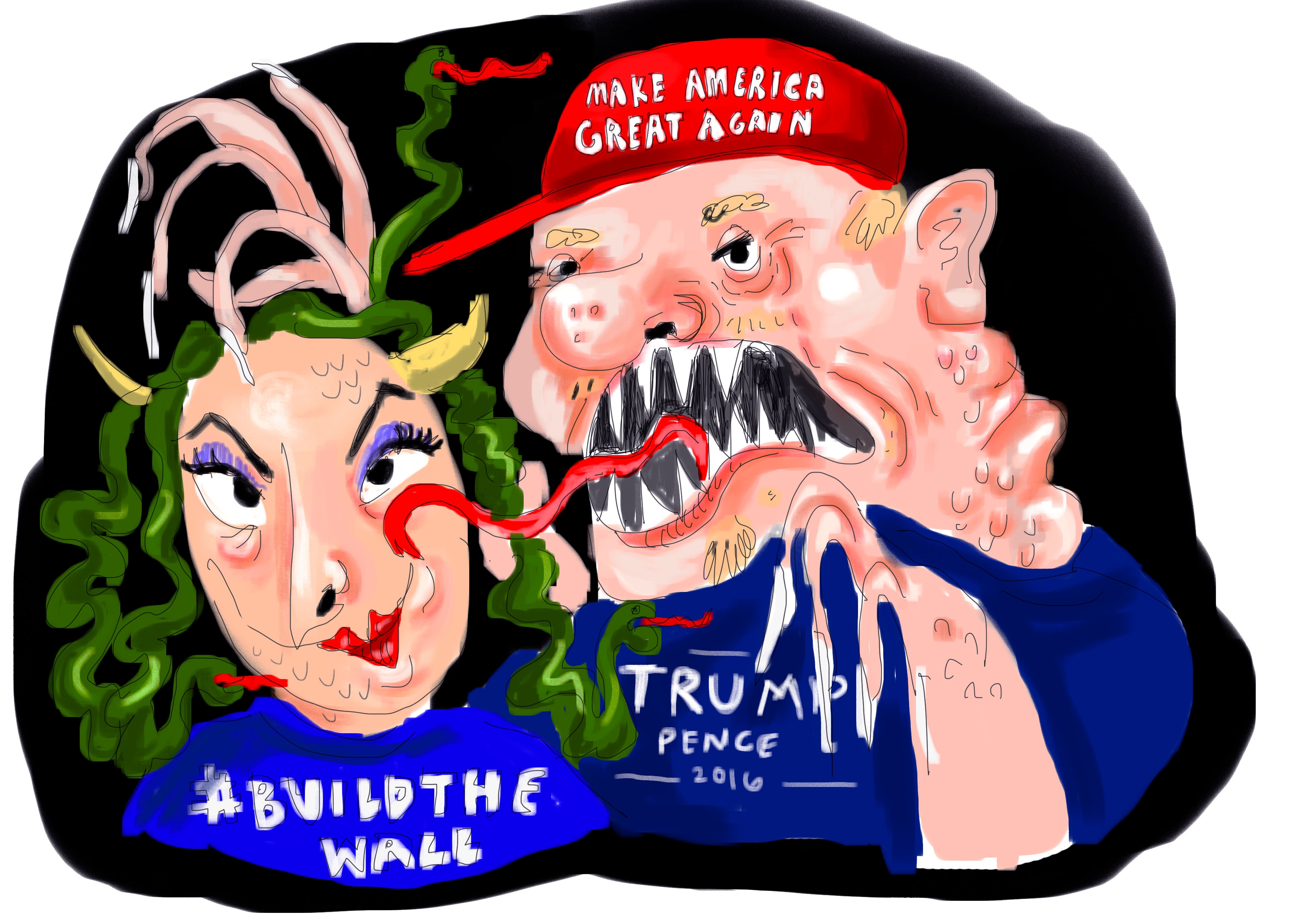 I know I’ve definitely participated in these playful exchanges; who wouldn’t jump on the chance to shit on Donald Trump and his army of bigoted, racist, uninformed followers? The punchline practically writes itself and the laughter that follows is a way for everyone in the gathering to prove to themselves and their peers they will be able to look back on this time and say without a doubt they definitively stood on the right side of history.

The open-minded, democratic, forward-thinking citizens are “us,” and the Trump supporters are “them.” Despite the constantly shifting perceptions of gender roles, sexuality, race and many other polarizing issues, this is one dichotomy liberal thinkers seemingly do not feel the need to challenge.

Although I identify as a Democrat and an advocate of social consciousness, women’s rights and pretty much the opposite of everything Trump stands for, I am disturbed by the propensity with which Trump supporters have been demonized and mocked for their choice of presidential candidate in the upcoming election. Disagreement and conflict are to be expected as a result of our country’s democratic decision-making process, but to me, the portrayal of anyone who supports Trump as an idiotic bigot is cause for alarm.

Eye-catching Twitter headlines and Buzzfeed articles have persistently encouraged us to categorize any and every Trump supporter as “The Enemy” and to think of them as punchlines, not people. However, I urge you to think critically beyond these one-size-fits-all depictions and join me in an attempt to understand and humanize this large portion of the population.

One of the worst side effects of the rigid condemnation of Trump supporters is that it contributes to the gridlocked state our government and the discourse surrounding politics have been trapped in for quite some time. Our two-party system, especially in recent years, has become polarized to the point that it is no longer effective because politicians are so deeply rooted in their own stances and those of their parties. Many people fairly criticize Republicans for contributing to this stalemate. Republican congressmen are more likely to filibuster than to sit down and even consider the other side’s perspective, let alone make a compromise. It’s frustrating, it’s counterproductive and it certainly doesn’t reflect well on the party.

“If progress and improvement is truly your goal, you are actively working against that objective by shutting out Trump supporters entirely.”

But aren’t “open-minded” Democrats doing the exact same thing when they declare their staunch refusal to even engage with Trump supporters? Every time I scroll through my Twitter feed after a debate, I see a new round of tweets to the effect of “Fuck anyone who’s voting for Trump,” or “If you’re voting for Trump, please unfollow me!” Several people have told me they would cut off a friendship or relationship with someone who turned out to be a Trump supporter.

I understand being frustrated with Trump and his policies — I’m with you in that respect — but telling anyone who supports him to unfollow you or exit your life is relinquishing any attempt at understanding the other side’s perspective and potentially convincing them to understand yours. If progress and improvement is truly your goal, you are actively working against that objective by shutting out Trump supporters entirely.

One of the reasons Trump has gained popularity in a way most Americans didn’t think possible is that he essentially spits in the face of elite government and the bureaucrats at the top of the hill who seem to be making all the decisions. For many voters, this promise of an America that will be made better for them is what made them pack their bags and join the Trump camp in the first place. I see many of these “elite” qualities reflected in the discourse that takes place regarding Trump supporters on social media.

Countless people become “woke” by reading Tumblr posts or long New York Times articles on police brutality and other hot button issues. Don’t get me wrong, this isn’t a negative thing on its own. Social media and the internet are incredibly effective tools for spreading crucial awareness of social issues that are often concealed from history textbooks and mainstream narratives.

It becomes a problem, however, when these “woke” people become so comfortable on the moral pedestal they have built for themselves that they flat out refuse to give the time of day to anyone with a differing opinion. To them, it becomes a question of who is more credible. Suddenly, the same people who declare themselves to be open-minded and upstanding for groups who traditionally don’t have a voice in society become just as arrogant and closed-minded as the oppressors they claim to be fighting against.

The fact is not all Trump supporters are evil people who support racism, sexual harassment and all those ills of society the “good guys” are working to fight against.

It is my understanding that these individuals are genuinely trying to improve the world and they believe the best way of doing so is to take an unwavering stance on the issues they consider to be important. Oftentimes, however, they forget they, too, were once unaware of the problems they now accuse people of bigotry and racism for not having researched yet. There is a learning curve for everyone, and it only discourages people from looking into your perspective when you admonish them for not being an expert on it right off the bat.

The fact is not all Trump supporters are evil people who support racism, sexual harassment and all those ills of society the “good guys” are working to fight against. They are complex human beings who hold the beliefs they hold for a variety of complex reasons, reasons many anti-Trump advocates do not seem interested in understanding. For example, anyone who’s taken a political science class or even AP Government in high school will tell you family background and environmental factors are the biggest indicators of a person’s own political beliefs. Growing up in our hometowns, each of us was immersed in a unique political subculture and learned to adopt the paradigms associated with that area.

Being raised in the Silicon Valley surrounded by liberal relatives, teachers and peers set me up to adopt a progressive worldview and an inclination to fight for social change. However, individuals who have spent the majority of their lives living in rural or otherwise conservative areas may have been raised with a completely different set of values and assumptions they draw upon to form their political opinions.

I’d like to think I’m a freethinking individual who arrived at my beliefs of my own accord, but can I guarantee I would hold these exact same values if I had been brought up in one of these conservative areas? Of course not.

Everyone has a different background and a different life story that led them to the place they are at today. As students at a large public university, we are surrounded by people with experiences and perspectives that differ considerably from our own and should be encouraged to learn from this diverse pool of voices rather than ignore them. We will never be able to live in the accepting, equal world many Democrats envision unless we lay down our defenses and attempt to truly understand one another.

Obviously, it is true that some Trump supporters are indeed racist and bigoted. For all I know, they could even be the majority. These sorts of people have existed throughout history and have formed institutions that perpetuate their oppressive values. However, I refuse to believe such a significant portion of our population is fully comprised of hateful, bigoted individuals who wish to reverse the tide of progress. I am skeptical of such simple assumptions in the context of the complicated, dynamic world we occupy today.

People are so adamant about hating Trump supporters that the label has become a dirty word, synonymous to racist, stupid and ignorant. Although I do not support Trump or condone his beliefs, my reaction to someone telling me they support him would not be to excuse myself from the conversation or block them on Twitter. Rather, I would talk to them and ask how they arrived at their opinions and hope they extend the same courtesy and open-minded approach to my own views.

They may seem like hateful, ignorant individuals based on the paradigms we have adopted and the portrayal of them on social media, but Trump supporters are people too; it is time we start treating them as such.

Regardless of who you are voting for, Laurel Rinehart wants you to remember that those who choose the other candidate are human beings, too.

Very open minded of you to write this. I wish more people on the left would follow suit.

It is wrong (logically and morally) to assume all members of a set are identical vis vis all their properties. I thus agree with your call for nuance above sterotyping. However, your final line: “Trump supporters are people too; it is time we start treating them as such” homogenizes important ethical and intellectual differences among Trump supporters — differences that make your appeal reasonable ONLY after one has carefully considered the qualities of the “people in play”. For example, while it also is necessarily true that “all cells are cells” (tautology), some are cancerous and should be treated that as… Read more »

Wonderful article Laurel. My travels through the Midwest really shocked me when I found that “decent” human beings could still be voting against Hillary and not necessarily “for” Trump. I hope that both sides in the wake of this election can at least try to understand each other more. – recent alumni

America just elected a person who claim climate issues are a hoax! A hoax by whom? Apparently the (Vast) majority of academic scientists. They have colluded in the interests of what exactly? And the hoax callers credentials in scientific sleuthing are based on what — their deep understanding of meteorology? There is a reason for understanding (as per the article). But the understanding in play is that we are living in a time that strongly suggests a from of government for, by and of the people is doomed because because a significant part of the voting public is too ignorant… Read more »