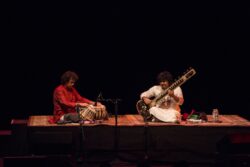 It is always unusual to be in Campbell Hall for anything other than a general education class full of undergraduate students trying to check off that last requirement. But tonight a variety of students found themselves in Campbell Hall long past 8 p.m. enjoying the fusion of the sitar and tabla drums along with the rest of the Santa Barbara community.

Santa Barbara was fortunate enough to host Zakir Hussain, one of the world’s most acclaimed tabla drummers. The tabla is a traditional Hindustani instrument that consists of a bass and high drum and requires intense training to skillfully play (with a complex series of finger and palm motions). Rising star Niladri Kumar accompanied Hussain on the sitar, which he specially modified to be an electrical “zitar.”

As I walked toward Campbell Hall, it was obvious the building had been taken over and class was no longer in session. The enormous trees that often provide shade to studious students or the weekly farmers market were all lit up with blue and purple lights to signify a grand cultural show was about to commence.

Upon arrival to the venue, I found a group of audience members following the instructions and dance moves of two Bollywood dancers. Arts & Lectures had provided the audience members with a preshow treat; if one was brave enough they could partake in this dance mob and learn the Indian dance moves. Despite the slightly uncoordinated dancing, it was entertaining to watch because there was a sense of unity and commitment in learning this unique dance style.

Once inside the theater, it was very difficult to separate school life from pleasure. The stage was set up in a very minimalistic manner, with an elevated platform for the artists to perform on. There was nothing to act as a backdrop so the audience sat in anticipation for the act to stimulate us musically.

The crowd was made up of an even range of students and a various mix of adults from the Santa Barbara community. After some eavesdropping and recognizing students from my world music class, it was easy to deduct many under the age of 25 were attending the concert for a class requirement. Those over 25 remained a mystery for the rest of the night; some seemed to be genuine fans, but the sheer range and diversity of this age group indicated this duo inspired an eclectic group.

When Hussain and Kumar finally stepped on stage it was much anticipated and well-received by the audience. The internationally acclaimed drummer blessed the stage as he ascended the platform, because, as he remarked later speaking to this quarter’s World Music class, “music is sacred.”

For those of us who were not so educated in the process of Indian music, Hussain kindly spent a few minutes explaining the structure of the performance. He added a flare of his personality to this speech by livening up the audience and the performance with a bit of humor.

In an improvised performance that was over two hours long, excluding the 10-minute intermission, only four songs were played.

The first song was purely sitar and highlighted the talents of Kumar. This left many perplexed, as they had been under the impression Zakir Hussain was the star of the show whom everyone had congregated to this venue to see. But it was further explained by the pair that the sitar takes the lead in the song and acts as the “quarterback” the tabla accompanies.

The first song had a long and lustrous build that left the spectators wondering what was happening and whether Hussain was ever going to play. But the slow build was worth the wait because the song had multiple climatic points that were extraordinarily impressive. The mad sitar player commanded the instrument with such skill and moved his hands across an overwhelmingly large instrument in a way that left viewers on the edge of their seats. In the middle of his solo performance he took smooth moments to tune his instrument; after over 30 minutes of this, Kumar joked this was the “long sound check we start the concert on.”

After the “sound check” the concert transitioned into what everyone was anticipating and waiting for: the inclusion of the tabla. The team finally unified and played their instruments independently and harmoniously to one another. They would look to each other for affirmation to move onto the next segment of the song or to check in to make sure one was not overpowering the other, but they were also each happily in their own element, enjoying the dramatic solos they enabled each other to play.

After an intense hour full of music and a responsive audience, the two called for a short intermission that was well-deserved.

The second half of the show was just as long as the preceding first half. This section of the show was faster and more vibrant, which I did not think was at all possible after witnessing the more plaintive first portion.

The tabla was the focus of the second segment of the show. Hussain really honed in on his talents and impressed the audience with his inhuman drumming capabilities. The way he played so many beats at once on the cultural drums by using different parts of his hands to strike the drum was astounding, and the will he had over his hands controlling how fast the tempo played was incredible.

The concert ended on a cacophony of sounds that highlighted the capabilities of both the sitar and the tabla players. The finale was so tense and dramatic that when it finally concluded the audience leapt from their seats in uproar, releasing the tension they contained while witnessing such an innovative performance.

In reflection of the performance, second-year Kristine Kazangyan stated, “I thought it was super cool how they played Norwegian wood.” She brought up stylistic elements I hadn’t even noticed: “It was cool that they fused traditional and pop music in that moment.” The duo had taken their traditional sound and made it accessible to the younger audience.

The good vibes kept rolling into the next day because I was fortunate enough to have the two musicians visit as guest performers in my world music class. The two gave my class a lecture on what music meant to them and how they have struggled as Indian and world musicians. They concluded their visit with a personal private performance that was greatly appreciated by the class and faculty.

The sacred pair impacted the audience in Campbell hall and the students in my music class alike. The take-home message Hussain conveyed through his music and vocalized in the class was “world music is an evolving entity, not a fixed routine.” 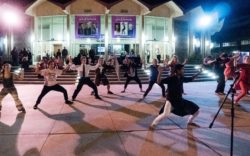