Coming off a brutal loss to Hawaii in the conference tournament, effectively ending its season and snapping the nine-game winning streak it was on, the UCSB men’s basketball team is ready to begin a new campaign in hopes of having a more successful season than its last. 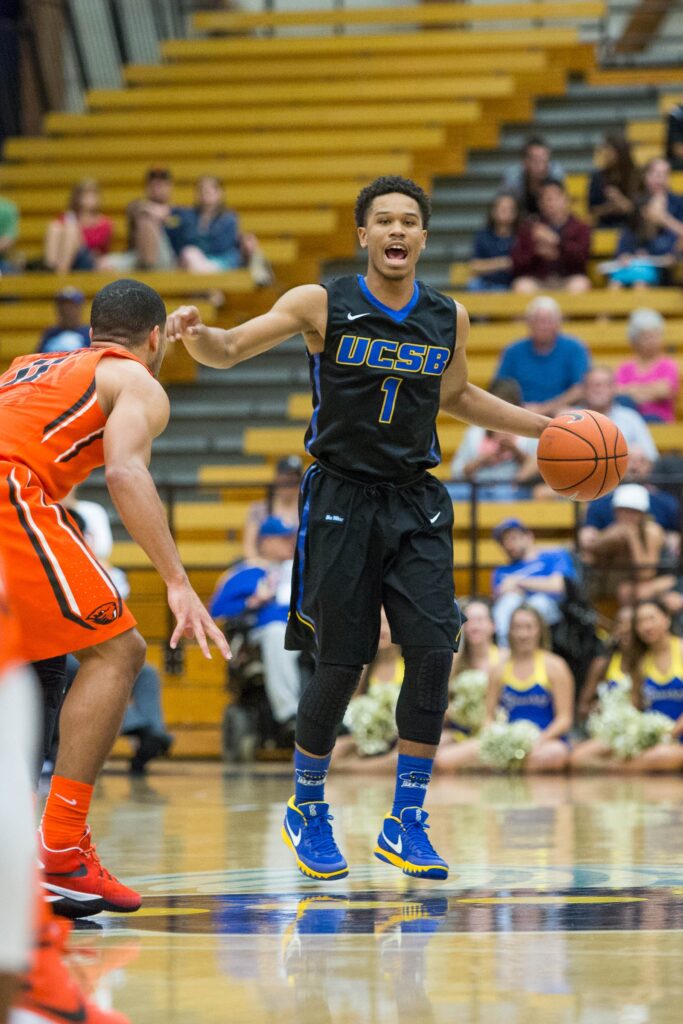 Eric Childress is about to drive toward the hoop. Dustin Harris / Daily Nexus

Santa Barbara finished last year 19-14 overall, and their 11-5 Big West record allowed it to finish fourth in the conference standings behind LBSU, UCI and Hawaii. The Gauchos finished the regular season winning their final eight games and defeated UC Davis handily in the first round of the conference tourney before falling to the Rainbow Warriors.

Heading into this season, UCSB is projected to finish fourth place again in the regular season while LBSU was voted to be the winner of the regular season championship. This could be due to the fact that the Gauchos are replacing five seniors including star guard Michael Bryson, who was a two-time All Big West First Team selection during his collegiate career.

Bryson led the team in points per game with 20.1, and fellow seniors forward John Green and center Sam Beeler were third and fourth on the team with 10.8 and 6.7 P.P.G., respectively. Bryson also led the team in rebounds with 6.4 per game.

“Nothing much changes for me,” said Childress. “I just want to be a leader for these young guys and help keep them composed during the game. These guys are going to look at me to show them the right way to go.”

Last year, the 6’0” guard was named a Big West honorable mention after averaging a team-high 4.3 assists per game and leading the team in three-point percent at 45.1 after knocking down a career-high 32 long balls. He was also tied for the first in steals with Vincent at 1.2 per game.

With that being said, Childress knows he still needs to sharpen his game in some levels in order to be the most effective floor general out there, both on and off the court.

“You always want to cut down turnovers as a point guard and I definitely want to find some more scoring opportunities,” said Childress. “I want to play the best I can but I don’t want to ruin this team’s chemistry. I just want to fill my role and be a leader.”

Like his senior teammate, Vincent was also a Big West Honorable Mention after hitting 80 three-pointers last season, second most in school history, and averaging 14.1 points per game, second best on the team.

“I had a pretty good offseason, worked on my game,” said Vincent. “Every year people expect more and I expect a lot from myself as well. I’m excited to show what I’ve been working on and see how far we can take this team. The goal is to get that ring and go play in the big tournament.”

The former Big West Freshman of the Year has some big hype surrounding him due to his great shooting ability. Last year he knocked down over 40 percent of his shots, higher than 38 percent from long range, and shot a career high from the line with 80.8. With constant improvement, the Gauchos will expect nothing less this year.

“Gabe is a great player offensively and can play both ends of the floor,” Williams said. “I expect big things from him; I think he will have a big year.”

While returning players are always welcomed, ultimately what will carry this Santa Barbara team is the new additions, and none come with more expectations than City College of San Francisco transfer junior Jalen Canty.

During his 2015-2016 campaign at CCSF, the 6’8” forward was named 2016 California State Player of the Year after leading his team to a 32-1 record and a California Community College title while averaging 13.3 points, 9.1 rebounds and 3.4 blocked shots per game.

“I want to bring rebounding and defending to my team,” Canty said. “For this team to be successful, I’ll be willing to do anything.”

Returning to the helm for his 19th season, Coach Williams will look to continue to add to the solid legacy he has built at UCSB so far. He is only one of three coaches in Big West history to earn over 300 wins.

“Love dealing with kids and young men who want to be good and want to get better,” Williams said. “They rejuvenate you. Every year the chance to deal with new fresh kids, and watching their growth.”

Excited to open the 2016 campaign, the Gauchos will face off against Fresno Pacific in an exhibition match this coming Sunday. Last season, the Sunbirds went 14-13 en route to a disappointing finish in which they were eliminated from postseason contention after losing their senior day matchup.

Under the helm of a new coach in first-time Head Coach C.J. Haydock, however, Fresno Pacific will look to bounce back and make a statement that this upcoming season will be a better one.

The Sunbirds are projected to finish 11th in their conference, but they do return two starters from last year’s team, including the team’s second-leading scorer redshirt senior guard Spencer Krannitz, who averaged 14.9 PPG and shot 50.7 percent from the field.

Although picked to finish fourth in the Big West for the second consecutive season, the Gauchos have the pieces to make a much better run. Besides the two returning guards and Canty, the Gauchos are looking forward to contributions from many other players on the young roster.

Hopefully Sunday’s exhibition match will be a coming out party for the Santa Barbara team.

UCSB’s exhibition vs. Fresno Pacific tips off at the Thunderdome on Sunday, Nov. 6 at 1 p.m.