The Daily Nexus
Volleyball
Stakes Remain High With UCSB On Road
November 3, 2016 at 5:02 am by Liam Bailey

The UCSB women’s volleyball team is back on the road this week, facing UC Davis on Thursday and UC Irvine Saturday evening.

Hoping to extend its two-match win streak, UCSB will hope to improve its 14-9 overall record while away on Thursday. Both teams are tied with the Gauchos at 5-5 in the Big West, but the Davis Aggies hold a positive overall record at 12-11 while the Anteaters are just 10-14 on the season. 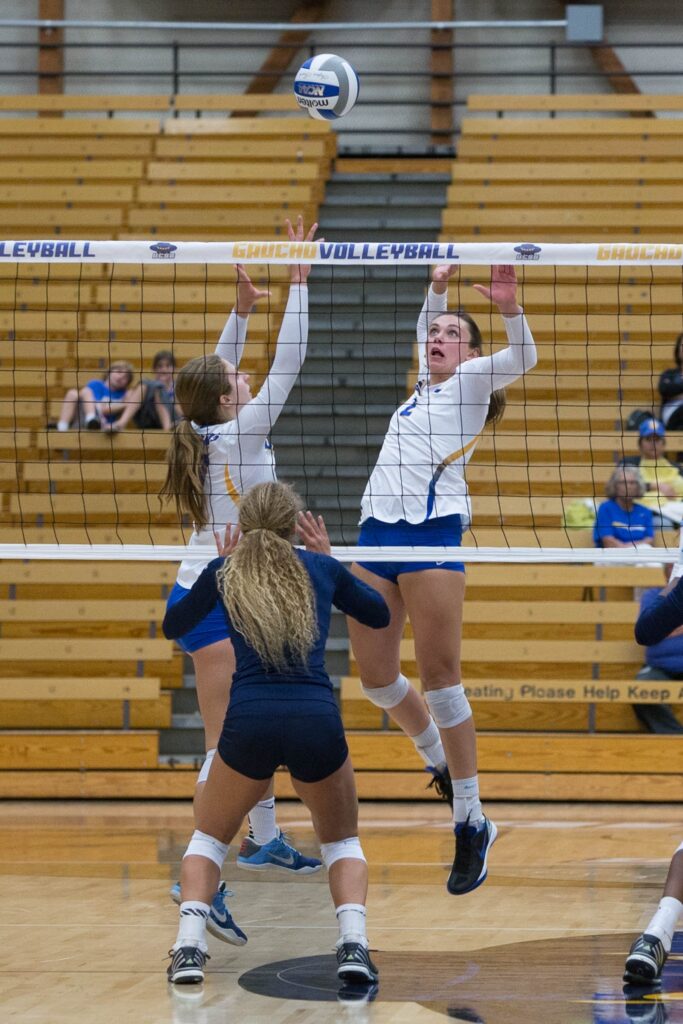 Davis will come into Thursday’s match as winners in three of its last five, although the wins (against UC Riverside, Cal State Fullerton and Cal State Northridge) were overshadowed by sweeps at the hands of Hawaii on Oct. 20 and Long Beach State on Oct. 29.

The Aggies receive the bulk of their offensive output from their potent trio of offensive hitters led by first-year Lauren Matias, who ranks 10th in Big West play with 3.42 kills per set.

She’s joined by senior Kendall Walbrecht and her average of 2.76 kills per set along with sophomore Emily Allen’s 2.45 kills per set clip, giving Davis three of the Big West’s top 20 in the stat since the beginning of conference play.

Senior middle blocker Aima Eichie has contributed 2.27 kills of her own during Big West play in addition to her 0.97 blocks per set average which ranks ninth over that span.

The main defensive threat at the net for the Aggies, however, has been sophomore middle blocker Kelechi Ohiri, whose 1.11 blocks per set tie her with Long Beach State’s YiZhi Xue for fifth in the conference against Big West competition.

Ohiri and Eichie are also two of the five most accurate players in the league with their attacks, posting kill percentages of .350 and .341 respectively.

Defensively, the Aggies are anchored by sophomore libero Malia Bolko. She stands at fourth in the conference in digs per set against Big West foes with 4.24.

The engine of their offense is powered by senior setter Sophia Mar and sophomore Maddie Merlino, who have put up 6.24 assists per set and 5.73 assists per set, respectively, against Big West competition.

Their two pronged attack will be an adjustment for the Gauchos, as they’ve played against one setter for their past three matches.

UC Irvine has similarly won three of its past five matches. The differences between the two teams, however, include Irvine’s ability to come away with at least one set against Hawaii and fortune to hand Long Beach State its first loss of the season in five sets.

The Anteaters will try and rebound from a devastating loss in their final match last weekend against Cal State Northridge after having been ahead by two sets.

Clearly a team with considerable upside after their recent results, Irvine has relied on redshirt senior outside hitter Victoria Dennis and sophomore opposite hitter Harlee Kekauoha against conference competition, as the duo has averaged 3.43 and 2.82 kills per set respectively.

Kekauoha also leads the Big West with .64 service aces per set in conference play. She has a total of 11 total service aces thus far this season.

Senior setter Shelley Anderson greases the wheels for the Anteaters, contributing 10.22 assists per set, the fifth most prolific mark against Big West teams this season.

The defensive effort is centered around junior libero Luna Tsujimoto, whose 4.15 digs per set place her just behind Davis’s Malia Bolko in the conference. First-year middle blocker Makayla Wolfe adds 1.42 blocks per set, the only non-Hawaii player in the stats top four during the Big West schedule.

This weekend the Gauchos will rely heavily on sophomore libero Emilia Petrachi, who has consistently made her case as the league’s best defender and continues to lead the Big West with 4.62 digs per set when matched up with conference opponents.

Redshirt first-year setter Hannah Juley will look to continue her ascent as her stellar play has begun to receive recognition; she was named Big West Freshman of the Week after her dominant outing in San Luis Obispo this past weekend, and her 10.49 assists per set still rank third in Big West play.

Senior middle blockers Elizabeth Sheffield and Phoebe Grunt will look to continue a hot streak of play where opponents have had major difficulties attacking the Gauchos at the net.

Winners of two straight and riding a wave of excellent play, the Gauchos are poised to assert themselves as postseason threats in the Big West.

Thursday’s match with the Aggies will be at 7 p.m. on Nov. 3 in Davis, after which they will get a day of rest. The Gauchos then travel to Irvine for Saturday’s 7 p.m. match with the Anteaters on Nov. 5.

A version of this article appeared on page 8 of November, 3 2016’s print edition of the Daily Nexus.