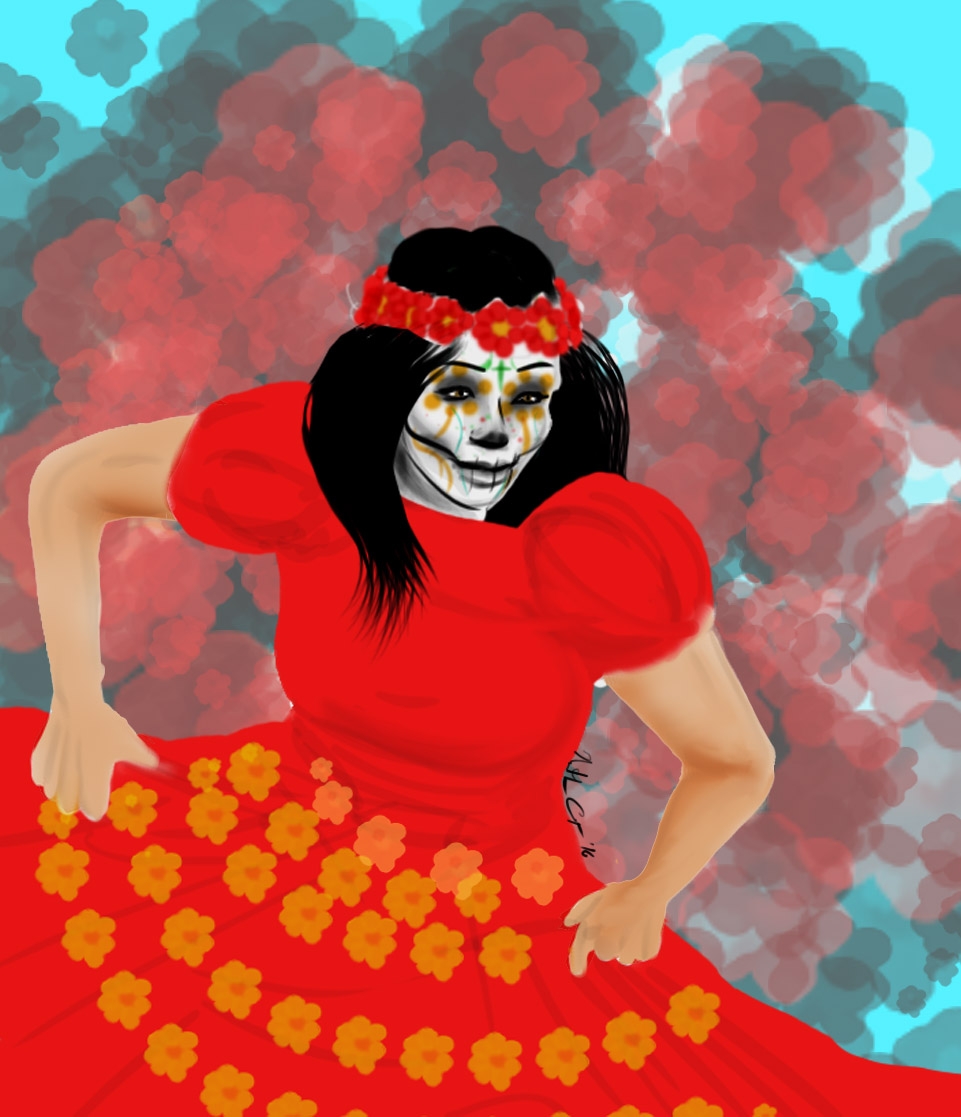 In downtown Santa Barbara, about a 30-minute walk from the transit station, Casa de la Raza held their annual celebration of Dia de Los Muertos. The festival was held all day on Saturday and was open to all who wanted to pay respect to loved ones or socialize with people from the community.

Just outside the building were booths offering a variety of themed activities, one of which was face painting. The people within the booth talked happily while one artist focused on painting a sugar skull on a little girl, who excitedly kicked her feet back and forth from her spot upon her chair. A second booth sold dresses and purses, as well as sugar skull tapestries. The last booth sold offerings such as rosaries and, right next to the Virgin Mary candles, shot glasses for the ofrendas, or ritual altars.

The small venue was filled to the brim with Day of the Dead decorations. Paper marigolds were placed in every available space, paper streamers lined the walls, two shelves were used to present giant paper mache sugar skulls and a large, hollow cross filled with sugar skulls hung on the wall. At the end of the main hall, there was an impressive display of a graveyard that included tombstones, streamers and pictures of loved ones, all enclosed by a picket fence.

Ofrendas lined every wall, covering every inch of the space with a colorful collection of offerings. Each altar held several pictures of relatives past and was well-spread with decorations of fruit, candles, pan de muerto (or bread of the dead) and various items the deceased enjoyed in life. One ofrenda in particular held a black-and-white picture of a man in his late 50s, propped up next to a classic glass bottle of Coca Cola and a crumpled pack of Marlboro cigarettes. This simple but sweet display was enough to get anyone to smile. On a separate altar was a framed photo of a teenage girl wearing a yellow dress; on the frame was a yellow bow to match. Several magazines were placed close by. A larger ofrenda was placed toward the middle of the venue and was labeled “Our Future Leader.” This altar had the most pictures; the most prominent was a group photo of about 10 smiling men. People not only paid respect to loved ones who have passed, but also to those who have had influences on their lives. On a long table in the corner of the venue was a picture of Frederick Douglass and beside it was a display of Bob Marley; the display was crafted out of a shoe box and decorated with Jamaica’s national colors.

The folks around the festival all had smiles on their faces as they not only enjoyed each other’s company but also enjoyed plates full of tamales, tacos and other delicious smelling food. The energetic live music flowed through the building and echoed off the walls. Although the band was not the center of attention at the celebration, they still enjoyed playing for children, parents and families. They danced around the small stage and gave huge smiles to everyone around. There were a few people scattered throughout the crowd who appeared to take a special liking to the music, and showed their appreciation by nodding their heads or tapping their feet. The sugar-skull-sweet experience of Dia de los Muertos left me with a smile on my face and a warm feeling in my chest.