A state election commission began an investigation Tuesday into allegations of possible campaign finance violations by Isla Vistans Against Higher Taxes, a campaign in opposition to Measure F.

Yes on E&F campaign organizers filed the complaint to the California Fair Political Practices Commission (FPPC) in early October, accusing Isla Vistans Against Higher Taxes of failing to report contributions in a timely manner and failing to properly identify the true source of its contributions. 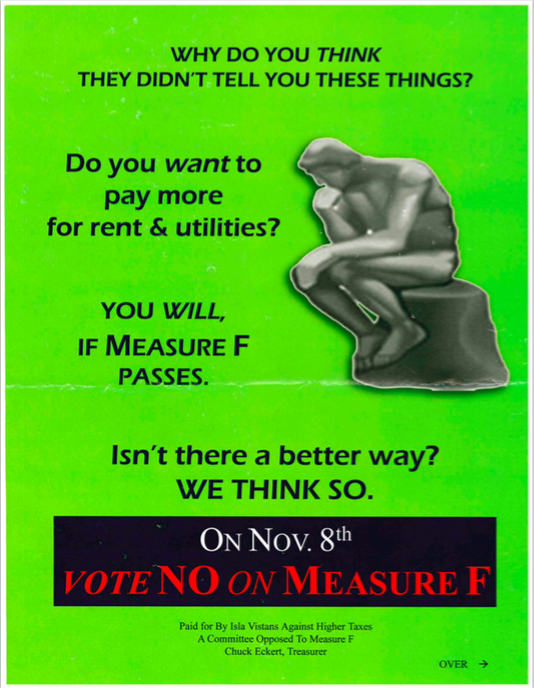 According to FPPC regulations, campaigns are to report contributions of $1,000 or more within 24 hours of receiving them.

Chuck Eckert, an Isla Vista property owner and treasurer of Isla Vistans Against Higher Taxes, confirmed his campaign did not report the large contributions within the 24-hour time limit. According to Eckert, the anti-Measure F campaign started receiving contributions of $1,000 or more before they formed an FPPC-recognized recipient committee.

“When we got the money, we didn’t know what the hell to do,” he said. “We weren’t trying to hide it or anything; we were confused. And I must say, if it were to happen again, we’d be confused again.”

Additionally, FPPC spokesperson Jay Wierenga said their policy mandates that campaigns must report the “true source” of their contributions.

The complaint to the FPPC reported several instances of the “true source” of contributions being “unclear.” For example, in its filings to the FPPC, the Isla Vistans Against Higher Taxes campaign listed company names in the “donor” category instead of in the “employer” category.

Eckert said his campaign filed contributions in this way because several companies, such as Wolfe & Associates, acted as “intermediaries” that gathered support from an array of individuals. He said his campaign listed the names of individuals in the “employer” category to indicate the underlying donors behind the larger company donations.

“If the FPPC looks into it, I think they will find that there is no violation here,” Eckert said. “The campaign did what we were told to do.”

According to Elliott, however, the Isla Vistans Against Higher Taxes campaign demonstrated a “lack of transparency” in how they reported their contributions. She said the Yes on E&F campaign made the complaint because the inaccurate reporting is “deceptive” to the public.

“There are rules that govern our election that are supposed to keep it open and transparent to the public,” she said. “People should follow the rules.”

Eckert said the Yes on E&F campaign organizers filed the complaint solely for the purpose of having it reported by the media.

“The complaint … was just a dirty trick designed by the proponents of Measure F to attempt to undermine what appears to be our successful anti-F campaign,” he said.

If passed, Measure F will give the proposed Community Services District the power to levy an 8 percent tax on the utilities of I.V. residents.