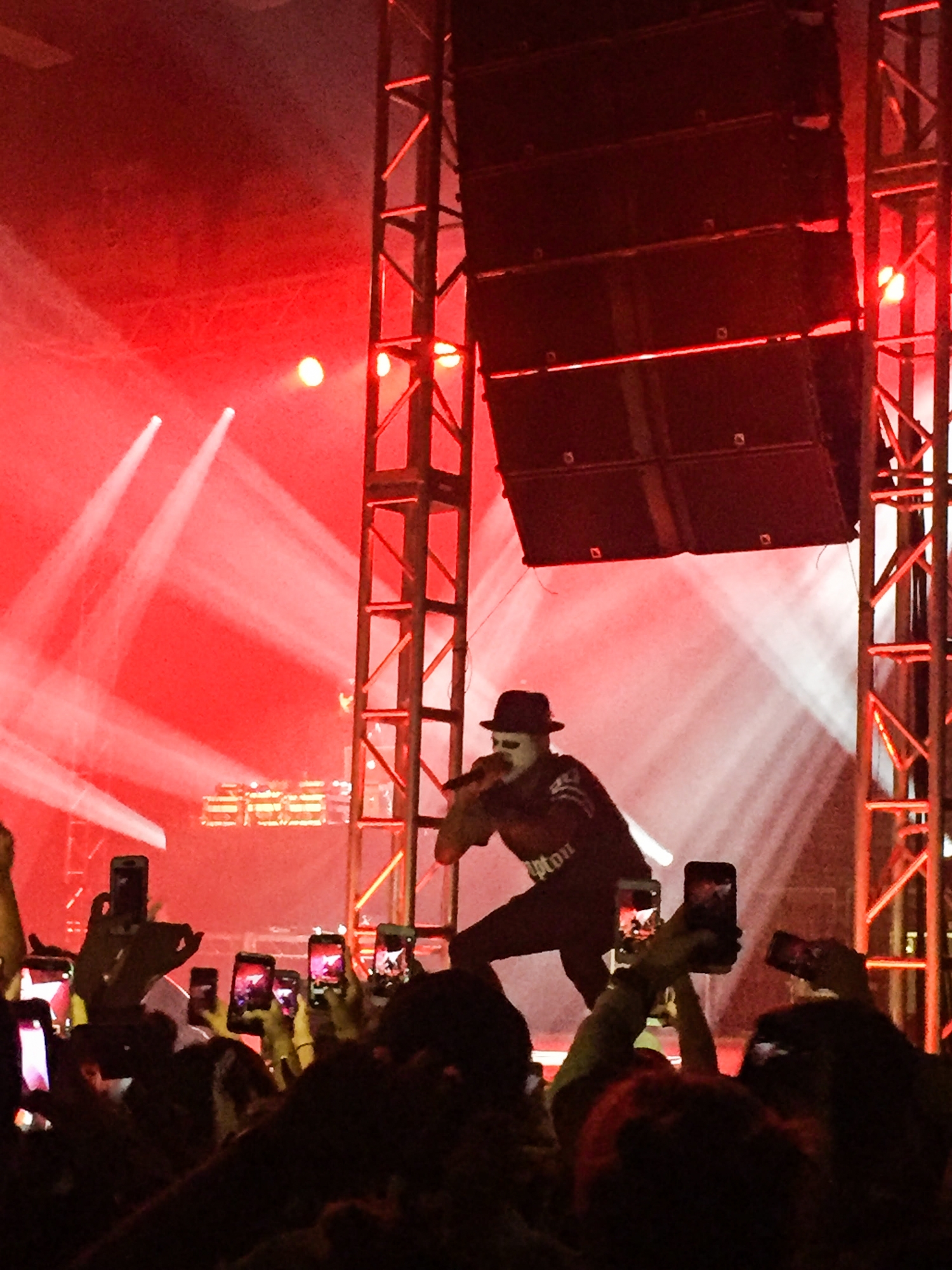 A resounding yes was found in the pure kinetic energy of the throbbing mass of UCSB students last Saturday. An entire college was left screaming for more as YG walked off Delirium’s stage around midnight, with students reeling from a thrashing and surprisingly acrobatic performance by Flatbush Zombies.

However, Saturday night began with an air of nervous tension in the shadow of the Halloween weekend lockdown. Given the greatly increased police presence and strict residential rules across campus, UCSB had been on edge since protocol began Thursday.

Questions about the reputation of UCSB’s legendary legacy, the Halloween that put Santa Barbara on the international list of places to be, have underscored the anxiety surrounding the extensive security measures. However, the enthusiasm toward the annual Delirium concert has come to replace this lost spirit of Halloween, and Delirium has become a benchmark of the UCSB legacy. In the words of UCSB undergrad Clare Doyle, “music brings people together, especially big names like YG … it’s cool that UCSB throws concerts like this. Kids really appreciate it.”

Taking into consideration the length of last year’s entrance line, eager Gauchos began lining up for the concert around 4 p.m., four-and-a-half hours before the concert was due to begin. Heightened security at the entrance initiated a wave of fears about the ticket exchange. However, excitement in anticipation of the performance was nowhere near subdued, and hundreds of anxious undergraduates began clogging the underground pathway leading to the Rec Cen fields.

Concert attendees trickled timidly into the Thunderdome under a heavy security presence. But once inside, the atmosphere changed; the anticipation for Flatbush Zombies compounding the waves of excited heat produced by the pulsing mass of concertgoers. The stream of entering students diverged into two paths, one seeking relative safety in the partially extended bleachers on either side of the main stage, the other merging straight into the throbbing heart of the concert’s ground floor.

As the stadium grew increasingly packed and excitement grew exponentially higher, everyone began to wonder when Flatbush was set to perform. A full half-hour passed in waiting for the opening act, yet the evaporating energy of anticipation became displaced, manifesting in the body-heaving fray created by Flatbush’s performance. Interventions by stage security, which were primarily to save raving concertgoers from being trampled, couldn’t dissuade the movement and flow. 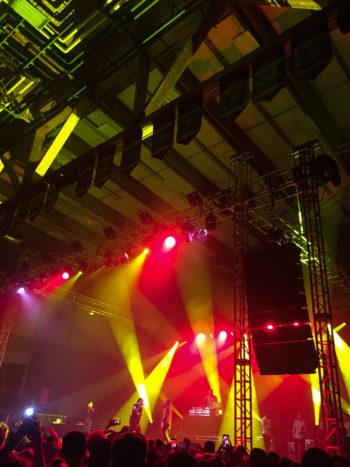 The throng excluded no classic Halloween character, but some concertgoers’ costumes were lost in the sweaty haze permeating the dance floor. To one freshman, Marlena, the green spotlights radiating from the stage as well as the smell “made the experience”.

The Zombies began with some of their more well-known hits, but, ever off the beaten path, refused to stay structured, instead choosing to freestyle while performing on-stage acrobatics. The Zombies’ shirts disappeared at the onset of the show, and Gauchos center-stage received a hearty surprise when one of the trio wormed his way to the stage through the crowd.

During Flatbush’s peak, two stage-wide mosh pits sprung up at the demand of Flatbush frontman Meechy Darko, who refused to continue performing without a “real mosh pit.” The pit soon devolved into rave-like chaos, with Darko interrupting the performance to address the crowd on numerous occasions. His interludes challenged the Gauchos to reanimate a yearning Halloween spirit and were answered with deafening roars by the pulsating mass of proud and primed UCSB students.

Before performing their outro, “Palm Trees,” Flatbush halted their performance so that a glassy-eyed and drenched Darko could command UCSB to “forget everything else we said tonight; if we leave you with one message, it’s this: Open your f***ing minds”.

But the main course was still yet to come, following another half-hour of waiting. YG’s act succeeded Flatbush with a crowd-hyping session by his crew’s DJ. Gauchos were taunted with an instrumental intro that brought on YG’s companion rapper.

A surge buckled the crowd as 400 stepped onstage after another instrumental intro. YG began his act with performances of classic YG hype hits “Still Brazy,” “Left, Right” and “Toot It and Boot It.” A fiercely responsive SB answered with a new wave of mosh pits and crowd turbulence. 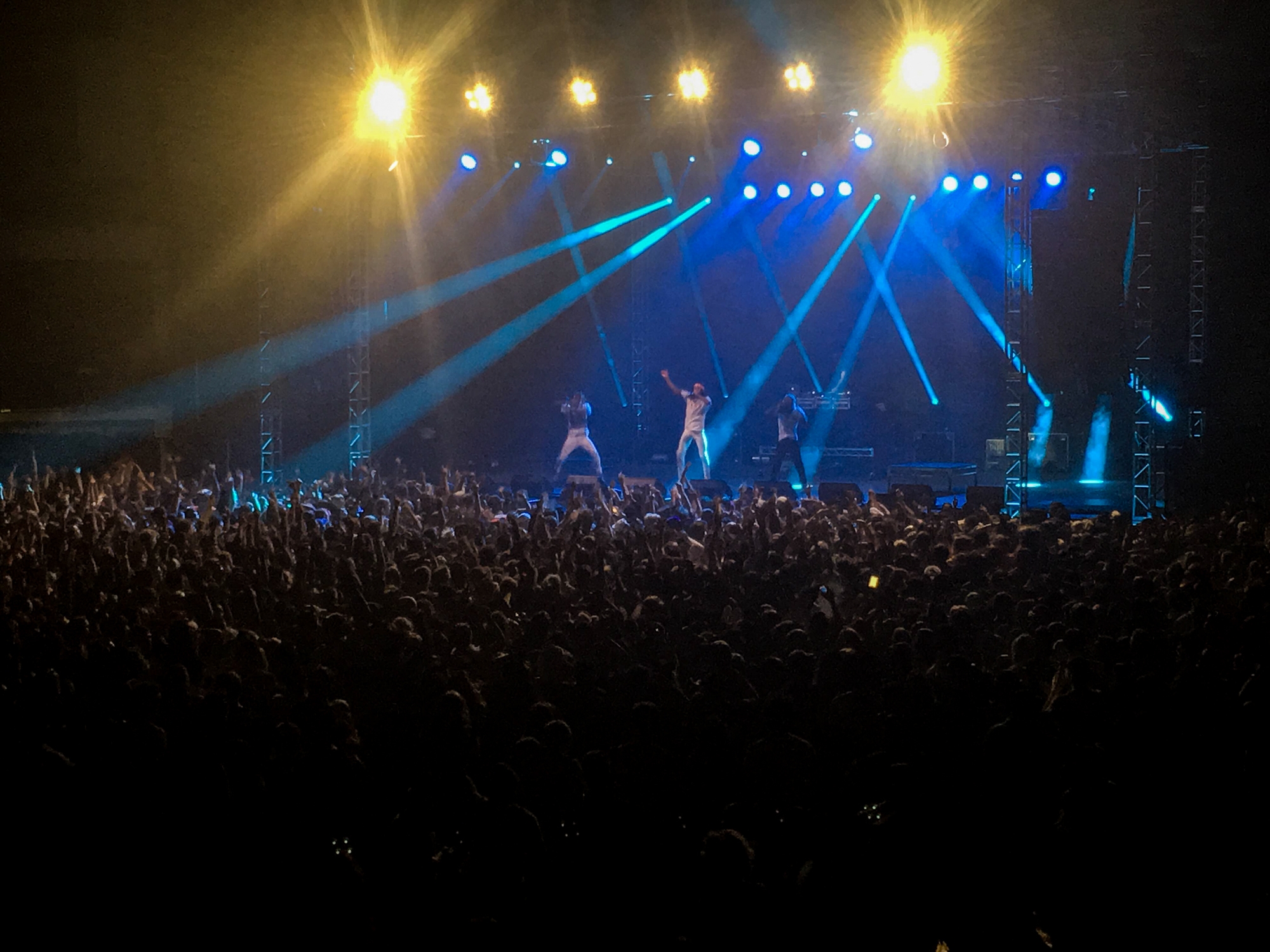 Around the middle of the concert, YG brought his performance to a halt, addressing the SB crowd with “Y’all UCSB, right? Lot of Latinos in SB. I love Latinos.” A brief speech about Latinos spawned an anti-Donald Trump tangent met with great support from YG’s famously anti-Trump fanbase.

YG attempted to quell a coming rant on the candidate by stating, “I’ll save that for the end of the show… in the meantime, I brought a friend with me.” YG then introduced East Santa Barbara native Sad Boy Loko as his guest rapper. While garnering limited recognition in the crowd, Sad Boy Loko regained the enthusiasm of YG previous performance by joining YG in singing some of the duo’s hits.

After Sad Boy left, YG resumed the concert with a riled performance of “Bitch, Who Do You Love,” another of his most successful and more recent songs. YG periodically interrupted the performance by addressing the Gaucho audience, asking girls to “speak Ghetto” for him and to perform other tasks in tandem with the concert’s atmosphere. YG also included a crowd-hyping interruption to throw some of his personal merchandise into the audience. The rapper and his crew then electrified the students with an extremely well-received performance of “Don’t Tell ’Em,”  his collaboration with artist Jeremiah, going so far as to freestyle from Kendrick Lamar’s Good Kid, M.A.A.D City. 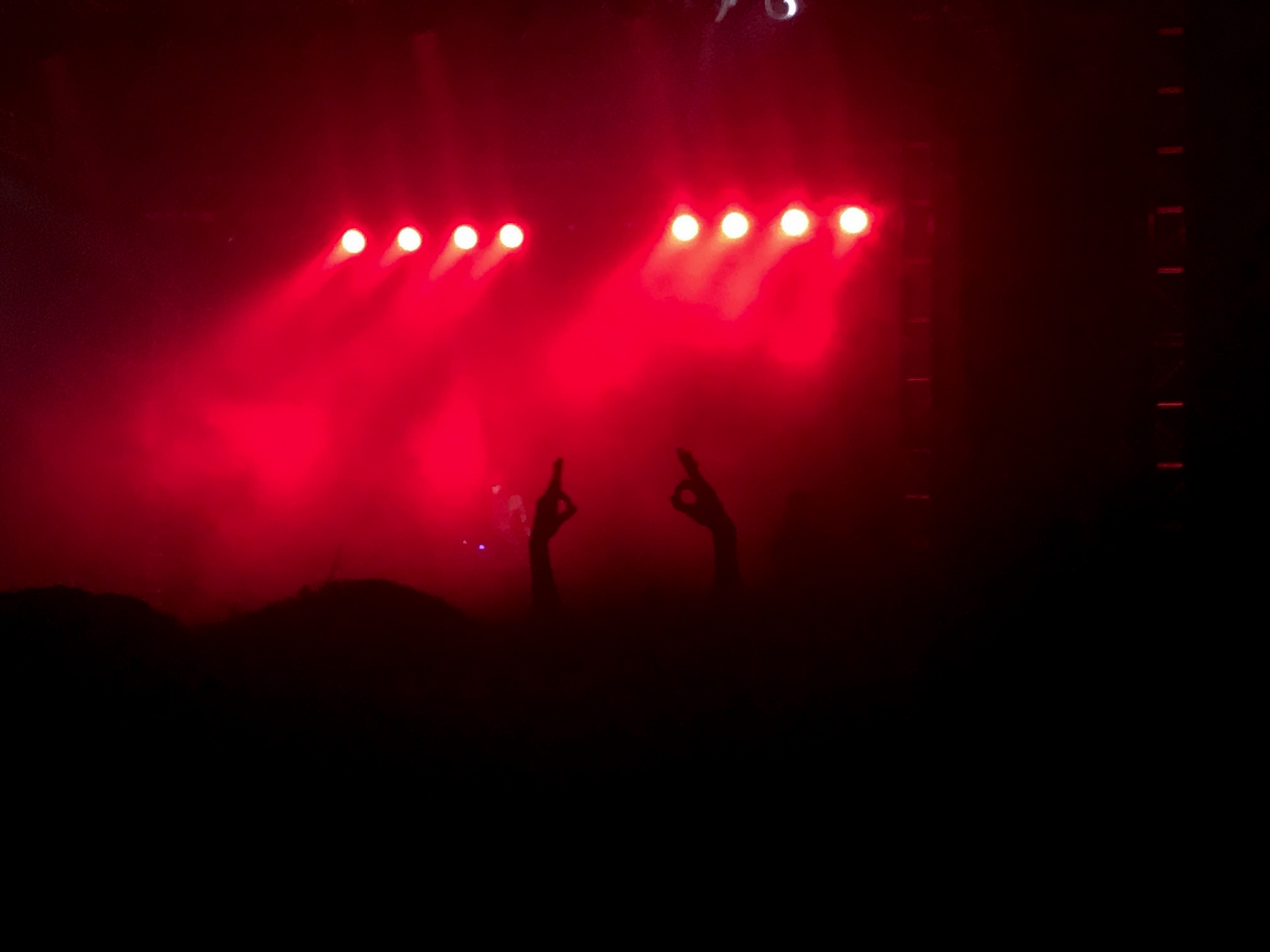 Toward the conclusion of the concert, YG revived the Donald Trump rant he had refrained from performing earlier, espousing to the Gauchos that, “a racist is running for office right now, a man who hates black people.” Following more commentary, he asked, “so who y’all voting for?” and delved into his infamous track “F*ck Donald Trump” to roars of “Hillary Clinton” and echoes of his catchphrase, “I like white people, but I don’t like you.” Following two more high-energy songs, YG was played out with the final words, “You great, Santa Barbara, look out for my mixtape dropping Friday.”  Right before walking off, YG concluded Delirium with the answer to his earlier question, settling all of the Gauchos’ Halloween unrest, “UC still brazy!”