Coming off wins in two of its past three matches, the UCSB women’s volleyball team extended its streak with an away win against Cal Poly Friday night in three sets, 25-17, 25-23 and 26-24. 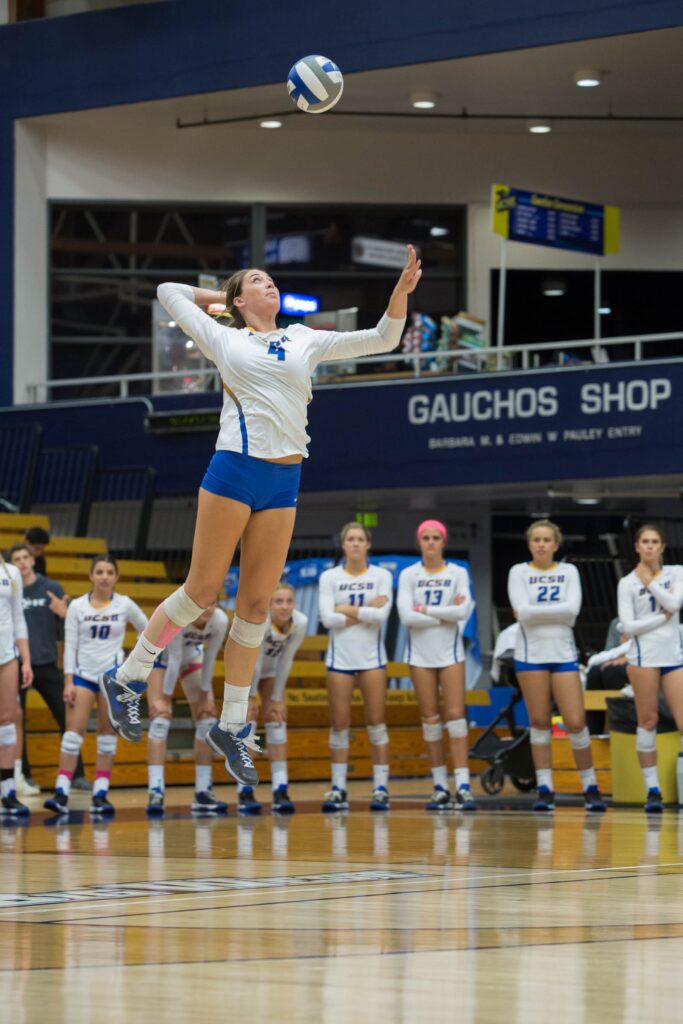 The Gauchos now sit at 14-9 overall with an even 5-5 mark in conference play, while Cal Poly stands at 13-8 with a 6-4 Big West record. The two rank fourth and third, respectively, in the Big West, though UCSB is in a three-way tie with UC Davis and UC Irvine.

Cal Poly is slightly removed from that cluster of teams, but has now dropped its last two matches after not losing for the entire month of October. Though talented, the team appears to be closer to the Santa Barbara, Davis, Irvine echelon than to the upper registers of the conference inhabited by Long Beach and Hawaii.

UCSB controlled the opening set, holding the Mustangs to a -.033 hitting percentage with eight errors and only seven kills, while hitting a solid .300 as a team.

The match began with a defining 8-1 run, including kills from freshman redshirt outside hitter Lindsey Ruddins and senior middle blocker Elizabeth Sheffield, both of whom also contributed to blocking one of Mustang junior middle blocker Savannah Niemen’s attack during the outburst.

Ruddins added two service aces in the set and ended with six kills including the game winner. Freshman redshirt setter Hannah Juley was her usual self, accumulating 10 assists in the first frame, right in line with her current average of 10.49 per set in the Big West.

The second go was much tighter between the rivals, with four lead changes preceding a kill from junior outside hitter Raeanne Greisen to reach Cal Poly’s high water mark in the set, a 10-8 lead.

A string of two Mustang service errors and two attack errors swung the score back into UCSB’s favor, a lead they would not relinquish for the rest of the set. Errors would be a thorn in the side of this Cal Poly team, as they went on to commit 11 in the set and 25 in the match, 10 more than UCSB’s total.

Senior middle blocker Phoebe Grunt put the team on her back in the set with four kills, including the game clincher, three of which were assisted by Juley.

Griesen tried her best to keep the Mustangs in the set, piling up seven kills and contributing heavily to a late 7-1 run that would tie the set. A block from junior outside hitter Chanel Hoffman and Sheffield followed by Grunt’s kill would seal the second frame for the Gauchos, however, putting the Gauchos in position to fulfill their first three-set sweep in conference play.

The Gauchos started the game strong with Sheffield and Juley starting the scoring with a shared block, followed by a Sheffield kill assisted by Juley.

After a four point run, including back-to-back kills from Greisen, gave the Mustangs the lead, UCSB would play from a two to five point deficit until the final moments of the set.

Down 20-23, the Gauchos found themselves in what has been a familiar position as of late: performers of two outstanding opening sets, but incapable of completing a sweep. The result was a heartbreaking comeback for Long Beach last weekend, and an unnecessarily late challenge from Cal State Northridge in the following match.

Greisen brought her team to the brink with a kill assisted by junior setter Taylor Nelson, but this time around, UCSB was not to be denied.

With Juley serving, the Gauchos would ride her endgame heroics to the tune of six straight points.

First came a Grunt kill on an assist by Juley, who followed by setting up freshman outside hitter Chloe Allen for her fifth kill of the set. Allen only played in the one game, but was instrumental in the Gauchos’ offensive firepower to close the match.

Following Allen’s kill, Juley was at it again with back-to-back service aces that tied the score at 24 apiece. Another Juley serve would eventually result in an attack error for sophomore outside hitter Adlee Van Winden, giving the Gauchos an opportunity for their first conference sweep of the season.

Juley would strike again, as her fifth consecutive serve would lead to a kill from freshman outside hitter Megan Rice, once again on her own assist.

The Gauchos would have three players finish with double-digit points, led by Ruddins who finished with a double-double on 10 kills and 10 digs, not to mention two block assists and two service aces.

Seniors Grunt and Sheffield would also finish with 10 and 13 points, respectively, totaling seven kills each. Sheffield was also a monster on defense near the net with eight assisted blocks.

Sophomore libero Emilia Petrachi racked up 15 digs, slightly above her conference average of 4.62 per set.

Juley was the star of the match, though, as her 31 assists, two service aces, 11 digs, five block assists and two kills on five attempts proved her ubiquity throughout the evening.

Greisen was unstoppable for the Mustangs, killing 15 attacks, though the Gauchos did a good job of limiting Van Winden (fifth in Big West with 3.80 kills), as she was held to a .069 hitting percentage.

Sophomore libero Katherine Brouker led the match with 16 kills as she maintained her position as one of the best liberos in the Big West and improved her digs per set to 4.34, third in Big West conference play.

The Gauchos finally sit at 5-5 in the conference and will look to continue their excellent streak of play next weekend against UC Davis on Thursday, Nov. 3, and UC Irvine on Saturday, Nov. 5. Both matches are scheduled to begin at 7 p.m.