Whether brought upon themselves or formulated by the media, the perpetual stigma that has surrounded the wide receiver position has been existent for decades with its class of “diva” personas.

Opposed by some, embraced by others for its attention and exposure, the limelight provided by the diva moniker can either make or break a receiver who is always under the microscope of the public eye.

There is no in-between when it comes to the labeling of a player as a diva.

Either viewed from the perspective of a player expressing himself and his passion for the game of football or judged as jeopardizing the game’s integrity and its focuses of team unity and sportsmanship, this divide in classification remains debatable.

In recent weeks, the sideline antics of New York Giants wide receiver Odell Beckham Jr. have served as a reminder of the diva image.

During the Giants’ three-game losing streak, beginning with the team’s 29-27 loss to NFC East rival Washington in Week 3 and continuing in ensuing weeks against Minnesota and Green Bay, it was easy to spot Beckham on the field rampantly frustrated.

Facing rival Josh Norman and co., the matchup concluded with Beckham screaming, throwing his helmet, shedding tears and even the backfiring of his madness when swinging on the kicking net as it fell and hit his head.

Certainly Beckham could have handled his emotions in a better manner; however, can we truly distinguish OBJ within the cohort of diva receivers?

What I like to consider as the entertainers of an offense, wideouts suitably have a more flashy approach to the game in comparison to other positions on the field.

As a receiver, the mentality is different.

Matched up one-on-one against a cornerback for the majority of a game, some receivers’ mindsets are ingrained with the notion they can’t be stopped by any defender on the field.

Adding a diva presence to this outlook can be the flashy celebrations or nonchalant attitudes toward the media that some receivers express.

With a history of receivers such as Chad “Ochocinco” Johnson, Terrell Owens and Randy Moss as prime examples within the class of divas, it seems every few years there is a new name that emerges. 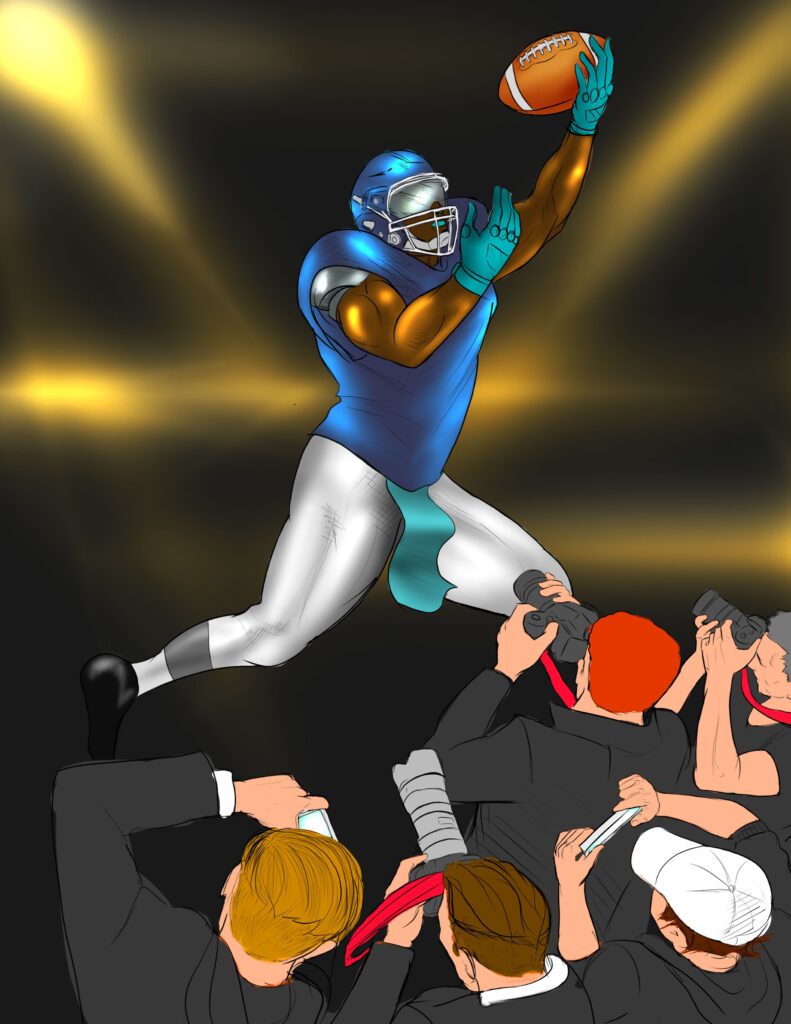 Known for his touchdown celebrations, blond-dyed hair, Head & Shoulders commercials, gracing the Madden 2016 cover, having a friendship with Drake and, of course, the unforgettable one-handed catch, Beckham is constantly surrounded by the glitz and glamour of superstardom, especially while in one of the nation’s biggest markets: New York.

Currently in his third season, Beckham is well-deserving of the praise he receives for his performance on the field. His 2,744 receiving yards through his first two seasons is the most in NFL history, eclipsing the previous record of 2,726 yards set by Randy Moss.

Although his immediate impact will be considered, the question of whether Beckham belongs within the diva class still persists.

Quite frankly, the answer is no. Beckham is not a diva.

It’s as if people have forgotten the exuberance and appreciation we had when tuning in not to watch the New York Giants play but rather to see the performance of Odell Beckham Jr.

From the pregame catching drills full of one-handed snags to graceful jumps in the air displaying his vertical explosiveness, Beckham has served as the main attraction since his introduction to the Big City of Dreams.

Sure, each player has their own way of expressing their anger when frustrated or dealing with overcoming the challenge of biting on the bait of an opponent, but is it plausible to define a player by such a behavior?

In the case of Beckham, excluding his fiery and sensitive character when on the field, he hasn’t been a true detriment to the Giants’ success.

While he deserves to be held accountable for the penalties he has amassed this season, a total of three (one apiece for taunting, unsportsmanlike conduct and offensive pass interference), Beckham has yet to be the reason as to why the Giants have lost games.

With Super Bowl XLVI being the New York Giants’ last postseason appearance, it’s safe to say that OBJ is not an inhibiting element in the team’s playoff hopes.

But football is a team sport in which brotherhood is vital to the locker-room culture, right? No individual player should be excused of the team’s successes and failures, correct?

Despite the truths of both of these questions, the team loyalty of players such as quarterback Eli Manning and first-year Head Coach Ben McAdoo has to be acknowledged as they both proclaimed Beckham’s sideline acts to be a distraction to the team.

Yes, Beckham was a distraction. But shouldn’t these issues be attended to and resolved internally? The calling out of Beckham just added more fuel to the fire in painting the progression of the wideout receiving the diva label.

By making claims of football not being fun anymore to celebrating on the sidelines, mocking his incident with the kicking net in the form of a proposal, Beckham has become one of the league’s most unpredictable personalities.

Of course it is always more appealing to be on the positive end of this spectrum, but sometimes the reserved or under under-the-radar demeanor of some players doesn’t exist for all.

For instance, consider the Hall of Fame career of Terrell Owens.

Second in all-time NFL career receiving yards with 15, 934 yards, third in receiving touchdowns at 153, sixth all-time in career receptions with 1,078 receptions, the record holder for receptions in a single-game with 20 to go along with a multitude of other accolades, Owens is one of the greatest wide receivers in NFL history.

While his renowned talent and statistical achievements surpass the qualifications of a Hall of Fame nomination, it was the diva stigma that prevented Owens from being a first ballot Hall of Famer.

Yes, Owens was a diva, beyond the behavior of Beckham thus far. Yes, he did play on five different teams in his NFL career. But, most importantly, he produced when it mattered most and at some point reigned as the league’s best wide receiver. These are facts that should have outweighed personality in the evaluation of Owens.

The narrative of the diva wide receiver remains and is here to stay. However, the headlines and perceptions formed are only parts to a story that has yet to be fully disclosed.

A version of this article appeared on page 9 of October 27, 2016’s print edition of the Daily Nexus.