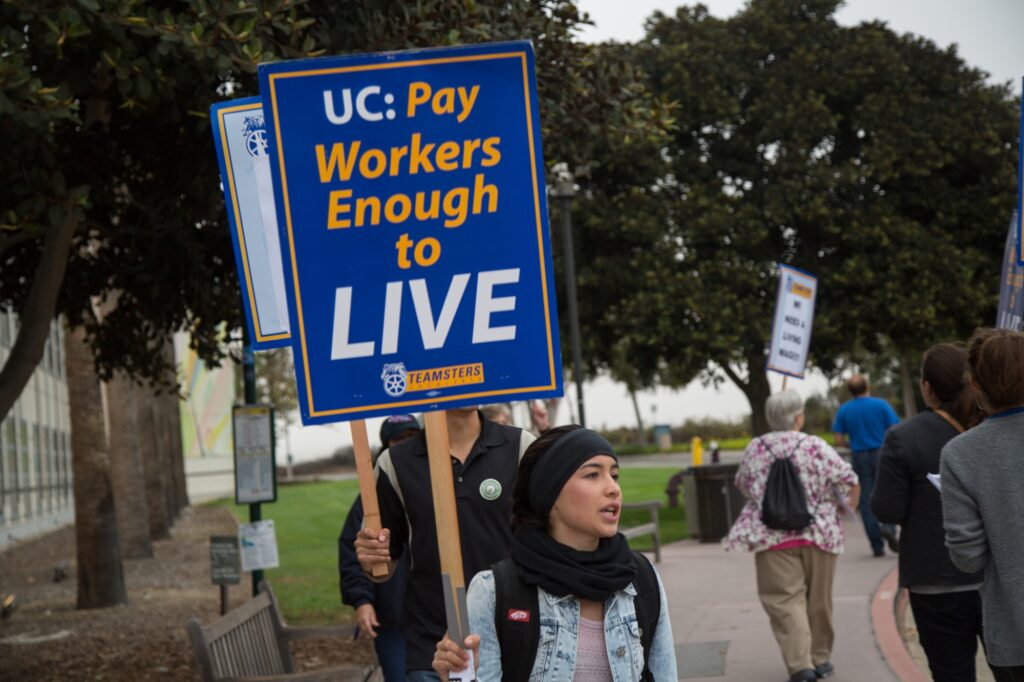 UC staff members are hoping to negotiate new terms of compensation with the UC Regents as they fight to purchase food for themselves and their families. Riley Esguerra / Daily Nexus

Laurence Young, a UCSB library employee of four years, finds striking parallels between his time as a graduate student and as a University staff member.

Young is the UCSB chapter leader of Teamsters Local 2010, a member-run union representing employees at the University of California.

In conjunction with the Teamsters, The Urban & Environmental Policy Institute of Occidental College produced a study on Oct. 17 that reported more than 70 percent of the UC’s clerical, administrative and support workers struggle “to put adequate food on the table.”

“The Teamsters union commissioned this survey as part of an external campaign to influence talks with the University over the terms of its labor contract that expires next month,” said Dianne Klein, UC Office of the President spokesperson. “UC has been bargaining in good faith with the Teamsters, as it does with all the labor unions representing our workers.”

Furthermore, Klein said the UC “heavily subsidizes the cost of health care for our workers,” with those in lower paid positions contributing “as little as $47 a month for health benefits for their entire family.” The UC additionally offers a pension program with guaranteed payments on retirement. 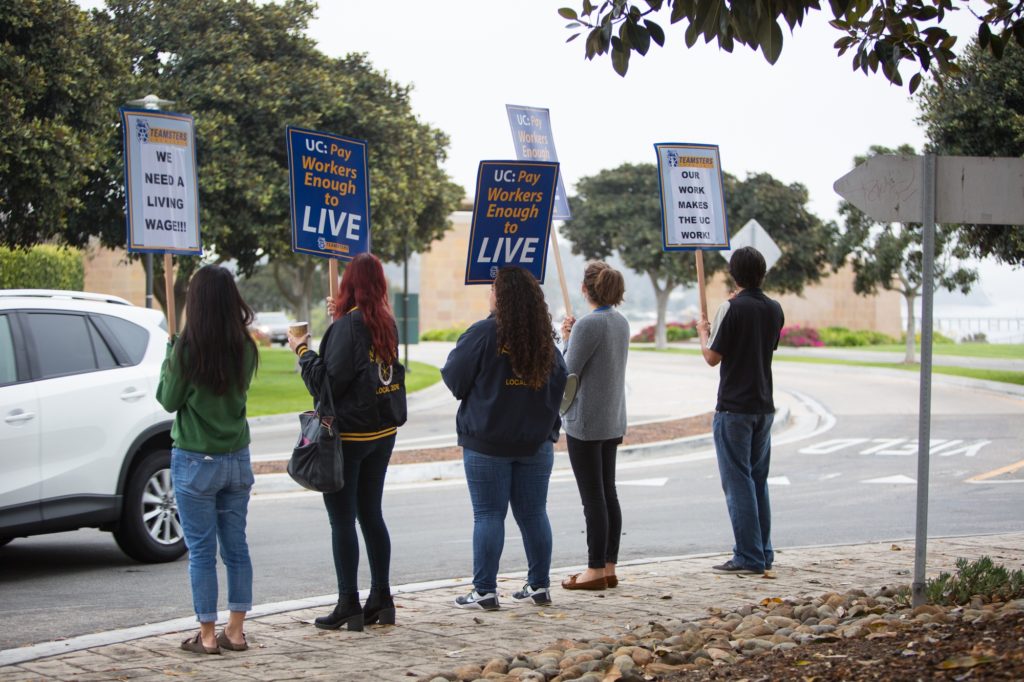 UCSB Santa Barbara Chapter members of Teamsters 2010 protested Wednesday to demand what they believe is a living wage.

“The University of California takes very seriously its responsibility to provide fair compensation and a safe work environment for all of its workers,” she said.

The University also implemented the Fair Wage/Fair Work Plan last year, establishing a new minimum wage for UC employees and service contractor workers at $15 an hour next year. This would amount to approximately $43,600 a year, in addition to overtime pay for full-time workers.

A 2013 California Budget Project study, however, estimated that a two-parent family with two children requires at least $61,000 a year to afford the cost of living.

“The survey just jumps off the page to us,” Young said. “This is surprising, we knew it was bad, but 70 percent is surprising.”

Young is almost 40 years old, and said it is “very upsetting” that he has to rely on his retired mother for support with groceries.

“It’s kind of humiliating frankly,” he said, but “relying on family support is not unusual, seven out of 10 of us are struggling.”

UCSB chapter members of the Teamsters Local 2010 staged a protest Wednesday at Elings Hall to gain attention for the movement, hoisting signs that said, “UC: Pay workers enough to LIVE,” and “UC You Can’t Hide Your Greedy Side!”

“A lot of my colleagues find the situations they find themselves in embarrassing,” Young said. “My story is not unique.”

I love it baby – these recycled articles keep popping up year after year. This nonsense has been floating around since I was a Gaucho in the late 90’s. Laurence Young – if you don’t like the pay you are receiving, you are free to find work somewhere else. ??? Why can’t you fathom that? How do you propose the UC pays all of its workers $61K? More tuition increases? Then we’ll have more student protests. Even higher taxes for CA residents? CA already has the highest state level income taxes in the nation. I went to UCSB and I… Read more »

$43,000+ a year seems like plenty to me, perhaps both parents in said family ought to be working to help exceed the $61,000 yearly threshold… These people don’t seem to be working for the UC, only for themselves. The harsh reality is they are already being paid exceptionally well for the work they do with benefits to boot.

I’ll repeat what I said last time Laurence Young was complaining about his salary in the newspaper: Mr. Young has no one but himself to blame for his lot in life. No one told him to get two masters degrees in music and then work in a public university library. If he is unsatisfied with his lot in life he is free to seek other employment elsewhere. Someone who is nearing 40, is earning around $35k in Santa Barbara, and relies on his mother for food ought to feel ashamed of himself. Supply and demand dictates salaries, not sob stories.… Read more »

The haters are not seeing the big picture. This is not “The Laurence Young Story”, but, rather, that Laurence Young and many other hard working politically informed men and women are speaking up and showing up to support the Teamsters’ Local 2010 efforts to bring living wages, fair wages to the staff. The fact is, UCSB clerical staff wages fall below the cost of living, and even below their counterparts at other UC’s. Fair wages are not the only issue on the table but it is the most visible one. Join with me in supporting UCSB’s clerical staff during these… Read more »

? How do you (or any of these Teamsters) propose that the UC gather the funds for these massive wage increases? That has not been discussed anywhere. What about adults supporting a family working in fast food. Do they not work just as hard as these clerical UC workers? They have stand on their feet all day. Do you think they receive a median wage of $22.65 per hour? That’s practically 2.5x the California minimum wage. Plus the fact that UC workers get a ton of holidays and other PTO as well as pension and generous healthcare. The great thing… Read more »

It will Happen
Reply to  Never Gonna Happen

It seems that you just don’t understand what the wage gap means; or the disparity of living wages vs cost of living among workers in our field. Even if some workers, as most are not even in the median wage, don’t stand on their feet all day, we work just like any other human and we work at these jobs to make the UC run effectively. Everyone deserves fair pay with compensation for all we do and some. You may forget, some workers have to work second and third jobs just to make ends meet for themselves and their family.… Read more »

Never Gonna Happen
Reply to  It will Happen

? Then quit and find a job that pays better. You control your own destiny.

zz44
Reply to  It will Happen

Improve your skill set and find a better paying job. It’s that simple

$43,000/year is not including benefits. Add $5000 year+ for health benefits and there was a mention of a pension which could be worth 10’s of thousands. Not to mention its a school job … how many days a year does he have off with holidays and breaks? Get a part time job and stop living off your Mom!