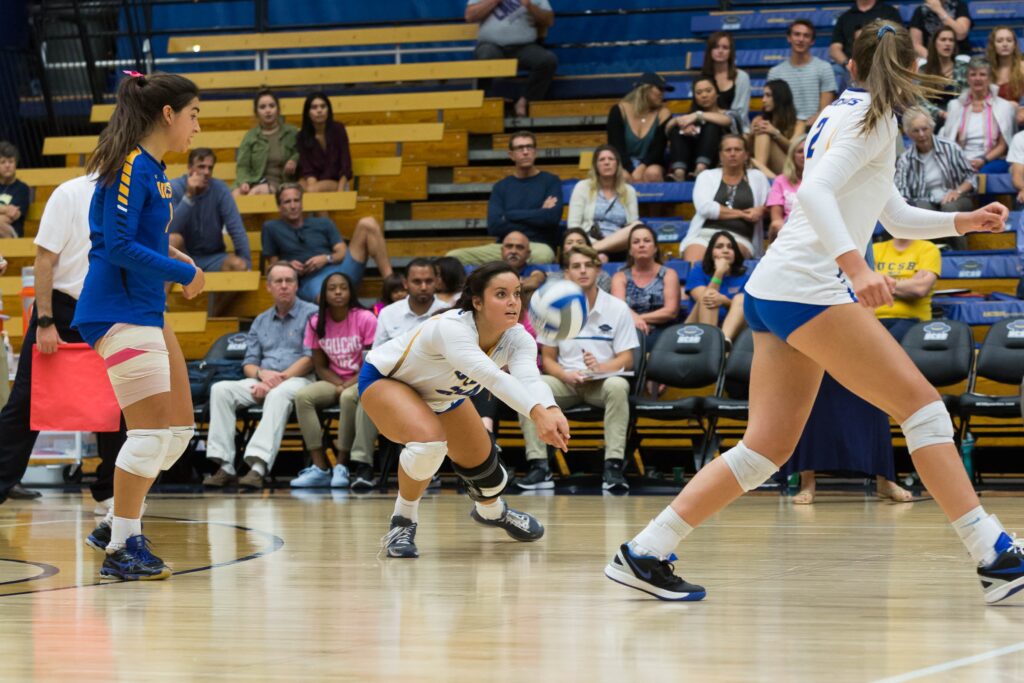 Every once in a while, a situation comes along that is so perfect, it seems as if it were destiny all along. One such circumstance is the pairing of UC Santa Barbara and star junior outside hitter Chanel Hoffman.

Hoffman is from Corona, California, and has been extremely dedicated to her volleyball career from an early age.

“Ever since I started playing volleyball, I wanted to go to a D1 school on the west coast,” Hoffman explained. “This is perfect because it’s not too far [from home] and not too close. As soon as I met the team and the coaches I fell in love with the school.”

Since arriving a little over two years ago, Hoffman has been invaluable to this Gaucho squad. She began her collegiate career playing outside hitter in all 27 of UCSB’s matches, something that, as a first-year, gave her insight into the importance of hard work.

“It’s definitely a big transition coming from high school to college; every athlete knows that,” Hoffman said. “The biggest thing is that as soon as you come in, you have to have the same maturity as everyone else. Once you’re in college, age doesn’t matter. You have to just work for your spot.”

Hoffman immediately proved herself a worthy contributor on the court, and by season’s end, she’d racked up almost 230 kills on an average of 2.34 per set, both of which ranked in the top four on the Gauchos.

“It was a great experience,” Hoffman reminisced. “I was able to play with all the seniors that left, and I learned a lot from them.”

The team found decent success with a 13-14 overall record and an 8-8 mark in conference play. While slightly down from the wildly successful 2013 season in which the Gauchos went 13-3 and won a share of the Big West crown, the season was a useful development period for Hoffman and UCSB’s other younger players.

After such a stellar start to her UCSB career, Hoffman’s continued improvement was seemingly inevitable in her sophomore campaign.

Through non-conference play last season, her game was clearly growing and becoming more efficient. While Hoffman’s offensive production dropped somewhat with only 1.95 kills per set in her sophomore campaign, her kill percentage rose from .138 in her first-year season to .221 in her second.

On Sept. 25, the Gauchos were handed a 3-0 sweep by a Hawaii team that would go on to an undefeated conference schedule. Hoffman lead the team that night with seven kills and only one error on 18 attacks (.333 kill percentage) and added 11 digs.

“It was such a sudden injury,” Hoffman recalled. “I actually played on it the rest of the match. It was in a tournament here, and then we travelled to Hawaii and I played on it there. I found out after we came back.”

After learning that she’d torn her PCL, Hoffman would have to begin the long road to recovery. 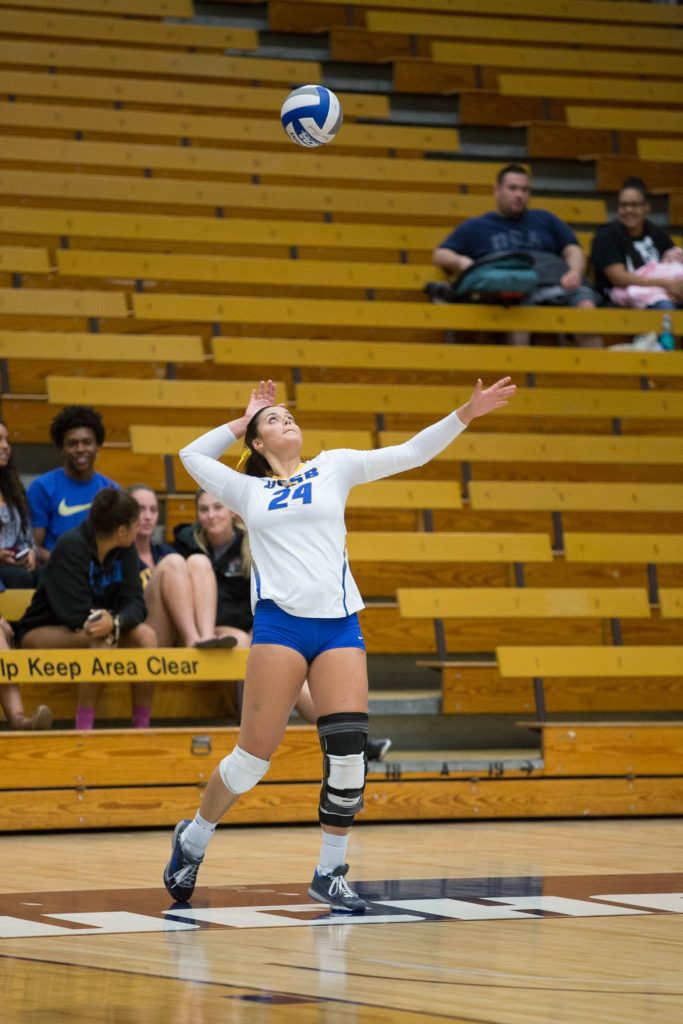 “I had never had that bad of an injury where I had to be out so long,” Hoffman remembered. “It was hard; I wanted to help the team and be able to practice and play, but I had to do what I had to do.

So far this season, Chanel Hoffman not only looks back to her lofty level of play from her first year, but now appears to have reached a new tier as an outside hitter.

Through 22 matches, Hoffman has 3.26 kills per set for a total of 254, already 25 more than her entire first-year season. Both marks rank ninth in the Big West, as she’s established herself as one of the best outside hitters in the conference. She’s been killing her attacks at a .237 mark, and is one of five UCSB players in the Big West’s top 25 for the statistic.

The junior outside hitter is tied for 11th in the conference with 19 service aces on the season (.24 per set), and her offensive dominance in the 2016 season has notched her seventh in the Big West with 3.8 points per set.

Hoffman’s 2.35 digs per set are an improvement of 1.52 from her mark in the previous season and of 0.42 over her first-year campaign. The defense from the outside makes Hoffman a consistent double-double threat, and her presence at the net to the tune of 0.54 blocks per set further contributes to her role as one of the league’s most all-around players.

“The coaches really push us in the gym and in the weight room,” Hoffman said. “I’ve been helped by the athletic trainers especially to get back [physically].”

“We have a really good team dynamic,” Hoffman said. “All of the freshmen coming in have key roles on the team, and I’m really proud of them.”

The team has focused heavily on creating that team dynamic this season. With all the young talent on the roster, creating team unity has proved its most valuable tool.

With seven conference games left, the Gauchos are hoping to win out and claim a spot in the NCAA postseason. The young Gaucho squad has shown serious flashes, including taking the league leading Long Beach State 49ers to a fifth set this past weekend.

“One of our goals is to win the Big West, and it’s still possible,” Hoffman declared. “We really want to get to the NCAA tournament, and I believe we can as long as we keep winning and keep this streak.”

Whatever success the Gauchos are able to have toward the end of this season, it will be a direct cause of the consistent excellence and unity that Hoffman has helped foster. With the injury behind her, success is the only thing that lies ahead.

A version of this article appeared on page 1 and continued on page 9 of October 27, 2016’s print edition of the Daily Nexus.