The Daily Nexus
Water Polo
No. 5 UCSB Excited to Maintain Perfect Conference Record
October 27, 2016 at 5:04 am by Jorge Mercado 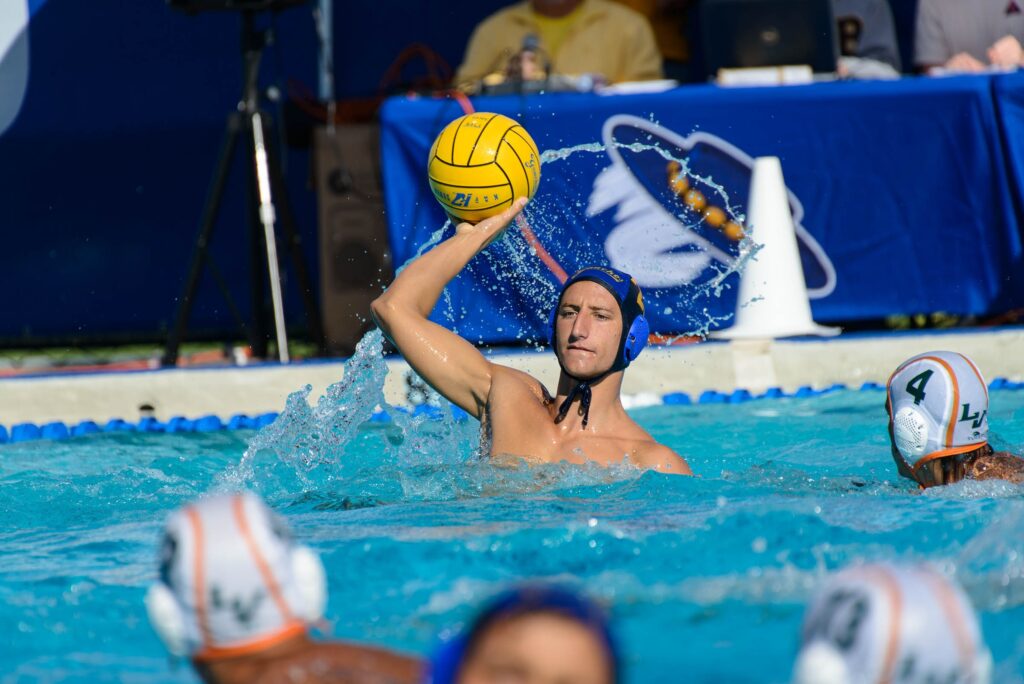 Tommy Fellner looks for someone to pass to. Eric Swenson / Daily Nexus

Coming off two big upset wins at home last week against then No. 6 LBSU and then No. 5 Stanford, the UCSB men’s water polo team jumped up two spots in the national rankings to be the new No. 5 team in the nation. The Gauchos will look to ride that momentum this week into Irvine for their third conference match of the season.

Santa Barbara faces off against No. 18 UCI boasting a 13-6 overall record, 2-0 Golden Coast record — tied for the best record in conference play so far — and winner of five of its last six matches. In its 19 matches played this year, UCSB has only lost once to a team ranked lower than they are in a game against the No. 7 LBSU when the Gauchos were ranked sixth in the country.

The Anteaters host their former MPSF rival, and now GCC rival, with an even 9-9 record and 1-1 record in Golden Coast play thus far. Their lone conference win came at San Jose State by a final tally of 10-9. Santa Barbara convincingly beat that same Spartan team 13-7 two weeks ago, albeit at home.

UCSB and UCI met twice last season with both teams each nodding a win; however, UCI’s was a bit sweeter as it came in the MPSF conference tournament, helping them place sixth in the competition while Santa Barbara settled with a seventh-place finish.

All time, the Anteaters dominate the series, going 102-45 in 147 total meetings, but in the two squads’ last 11 meetings, the Gauchos have been the more dominant team, winning eight of those matches.

With that being said, UCSB is in too perfect of a position this far into the 2016 campaign, in both conference and nonconference, to blow it now against a UCI team that it should beat with its more talented roster.

In their two big wins last week, it truly was a team effort for the Gauchos. The team totaled 15 goals in the two games with only two players scoring more than a single goal in each match. One of those players was utility Ivan Gvozdanovic.

The emergence of the young freshman was more than apparent last week after notching two goals against Long Beach State and adding one more versus Stanford. In the last four matches, the Serbian native has dominated, scoring a total of 10 goals, including a hat-trick against No. 2 USC.

Other key factors in the winning stride the Gauchos have found as of late are seniors Mitchell Hamilton, an attacker, and Reed Cotterill, a utility. Both Hamilton and Cotterill have scored at least one goal in six of their last seven games.

However, the argument could be made that the most dominant UCSB athlete as of late on the water polo team has been senior goalkeeper Liam Lenihan. The senior’s play has been excellent as he limited both the 49ers and the Cardinals to their second-lowest-scoring totals of the season with five and six, respectively. In the two games last week, Lenihan allowed only 11 goals while racking up 25 total saves, including a season-high 15 against Stanford.

With all this talent on the roster, it could be difficult for UC Irvine to keep up, but it intends to as long as key players Jack Trush and Ryan Warde show up for the entire length of the game. Trush, a senior defender, has tallied 34 goals on the season, best on the team, including a season-high five-score performance against Pomona-Pitzer earlier this year.

Warde has also been solid on the offensive side, scoring 28 goals on the season, good enough for second best on the team. The junior attacker is coming off a great game at SJSU, tallying a season-high four goals in that match.

Thursday’s match should be an easy win for the Gauchos. Although it is a conference game and no matches should be taken lightly, the truth is that this UC Irvine team UCSB is facing tomorrow is not the one it is accustomed to facing.

UCI has not been the same team as in the past, and Santa Barbara needs to take advantage of that in order to get a 3-0 GCC record, which will them in prime position to take the inaugural regular season conference title. Despite only being 2-4 on the road this season, the Gauchos need to find some way to get this victory and keep the momentum rolling as the regular season begins to come to a close.

UCSB takes on UC Irvine at the Anteater Aquatics Complex on Friday, Oct. 28 at 7 p.m.

A version of this article appeared on page 9 of October 27, 2016’s print edition of the Daily Nexus.