The Daily Nexus
Opinion
Muslim in America: The Gray Area
October 27, 2016 at 5:00 am by Komal Surani

“I pledge allegiance to the flag of the United States of America, and to the republic for which it stands, one nation under God, indivisible, with liberty and justice for all.” Every day from elementary school to high school, these words echo over the speaker systems of every school in America. These are words that define America and its principles, and words that every American can recite from memory. These words that we have been taught to believe in talk about freedom and justice for everyone, regardless of race, religion or gender.

Every American would like to believe that not only are these values we preach, but they are also values we incorporate into our actions. However, since Sept. 11, 2001 and perhaps even more since election proceedings began, the majority of Americans have ignored the belief which our country was founded on: All men and women are created equal. They have taken to social media and news media to give America the villain it has hated for 15 years: Muslims. Muslims have become a scapegoat for the country to turn to every time something goes wrong. Muslims live in fear that today is the day someone is going to come and ask them to wear badges of crescent moons and stars and walk them out the door and out of their lives. My name is Komal Surani, and I am an American Muslim woman. 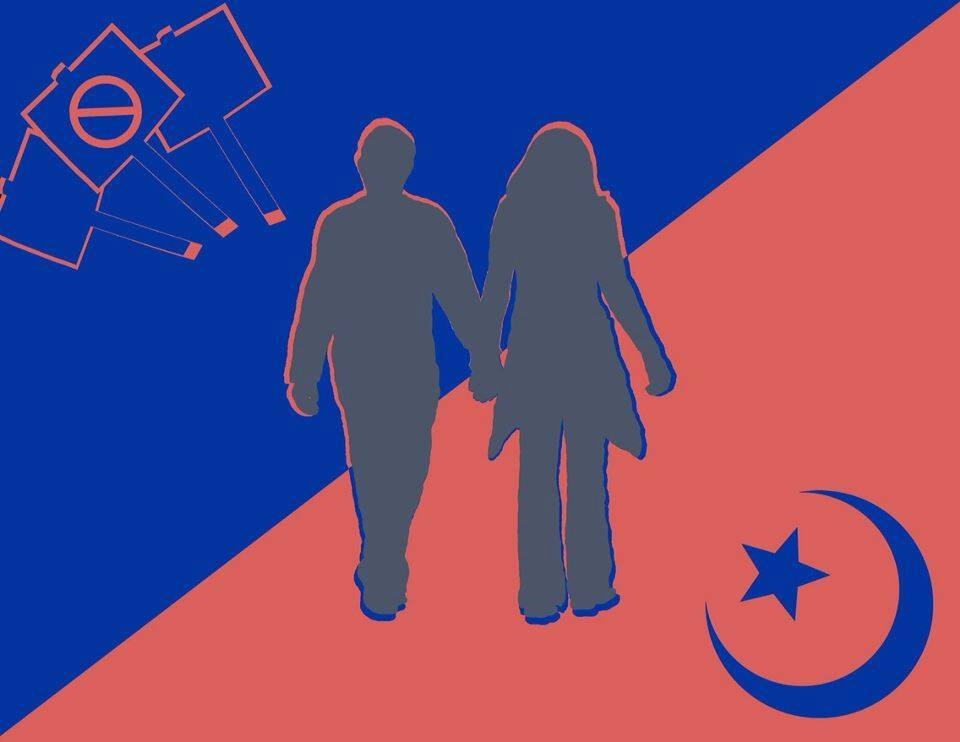 A group of people is often easily defined as one unanimous being, made of people who are alike in every way, who all think the same, act the same and believe exactly the same things. All feminists are man haters. Every Southerner is a racist. And of course, all Muslims are terrorists. All 1.5 billion of them, that is. The media reports on it every minute of every day, always painting Muslims as a group of terrorists simply waiting for the opportunity to blow America apart. Muslims have easily slid into the role of scapegoat. The media and even most of America can’t fathom the idea that Muslims do not think alike, nor are they all alike. Muslims are individuals from varied communities and homes. They are elderly and middle-aged and fresh out of college and high school graduates and kids in classrooms and babies born in a world where they are hated from the moment they open their mouths and begin to wail. They are all of these people, but America prefers to wear rose-colored glasses. It is easier for every Muslim to be a criminal than to fight the Islamophobia that has taken over our country.

The media and even most of America can’t fathom the idea that Muslims do not think alike, nor are they all alike. ”

Americans are afraid, but Muslims are afraid, too! It’s not easy to grow up in a place that hates you for something that happened when you were too young to remember it. But you hear the horror stories of the young college kids living in New York at that time who were called in for FBI questioning for no reason other than the fact that they were guilty of having the same religion as the man who perpetrated horrible crimes on America, Osama Bin Laden. They were people who came to America to learn, love and live in the land of dreams and ended up living their worst nightmare. Ostracized from society. And for what? A crime they were unconnected to but still blamed for? Fear goes both ways. The more America’s fear spills over into the everyday lives of Muslims and their families, the more frightened the people who believe in Islam become.

In the last few months, America has watched as Donald Trump made those things — bullying, sexual assault and racism — that we have worked so hard to outlaw in our society acceptable to do and say in America. Trump has erased 10 years of progress in 10 months. Athletes shout at Latinos in their school about that wall that’s going to go up. Teenagers bully and fat shame and believe that it’s okay, because after all, Donald Trump is doing it. Adults especially perpetrate a culture of Islamophobia, made stronger by the fact that Trump himself encourages this behavior and does nothing to stop it. And then Trump wonders why these people are not on his side, the people of different races who have faced more bullying than most white children, the people who believe in different Gods who are mocked every day, the people who are different than Trump’s America. It’s no longer about us not liking his policies on trade or education, it’s about self-preservation!

The words “Muslim” and “woman” hold so many misgivings and misrepresentations and are not much better together. A Muslim woman is looked upon as someone to be pitied, someone who is living in a world in which her voice stays silent and unheard. Although I do not wear the hijab, I still live this stereotype every time I tell somebody that my religion is Islam. They ask me if my parents had to educate me, rather than wanted to. They ask me if I’m not allowed to wear certain things or say certain things. They ask me questions that the media perpetrates, again and again. I concede that in some places where Islam is prominent, women are oppressed. This, however, is not because of their religion, but rather because of the countries they live in, the cultures and values that surround them and the governments whose rules they encounter.

Any woman, whether Christian or Jewish or Muslim, would be oppressed in these places because religion does not create oppression, people do. Countries like Indonesia, Nigeria and Turkey have high Muslim populations, yet their women are free to live the way they want. This is because religion and oppression have no correlation. Countries themselves create a culture of equality between men and women. Islamic women make their own choices, have their own jobs and are their own people. A good example of this is Malala Yousafzai. Yousafzai. was not oppressed by Islam. In fact, if you listen to what she says, you will hear the exact opposite. Yousafzai. lived in a society in which education for girls was frowned upon.

I have grown up to be a confident, empowered woman. These aren’t words we often associate with Muslim women, but they are what I am. I am the grey area. ”

This was not her fault or the fault of her beliefs but rather the fault of the Taliban who tried to make sure women were uneducated. Yousafzai. is not a face against religious oppressors, she is a face against people who use religion as a reason to oppress people. Her faith was never something that harmed her, but was rather a source of strength for her. People interpret religion in different ways and contexts, and this is why there are so many different ideas and structures built around Islam. Everybody has their own concept of what their religion is saying to them.

My faith has taught me so much about life, self-value and self-truth. I have grown up to be a confident, empowered woman. These aren’t words we often associate with Muslim women, but they are what I am. I am the gray area. I am not the Muslim the media wants you to see or believe in. This is because I am normal — well, as normal as a teenage girl can get — and my life is probably similar to most of yours. I’ve been lucky, you see. I’ve never personally been made to feel bad about my religion, but I see it happen on the news and to my friends who are Muslims. I hope you will take from this the lesson that all Muslims are different people, with different lives and beliefs. There are as many Islams as there are Muslims. We are not all black and white. We are the gray.

Komal Surani is a Muslim woman, and she is her own person.

“Countries like Indonesia, Nigeria and Turkey have high Muslim populations, yet their women are free to live the way they want.” Muslim women in Indonesia are forced to have domestic issues such as marriage, divorce and alimony settled in sharia courts. Women in Aceh, Indonesia are subject to both sharia and hudud laws. Many women have been publicly flogged in Aceh for being to close to a man or other so-called offenses. Nine Nigeria states make Muslims subject to sharia law. Northern Nigeria has been fighting a battle against Islamic control for decades. Boko Haram and other Islamist groups constantly… Read more »

Est, Indeed, wherever we observe Islam we find misogyny – and this is representative of How Mohammed treated women – we see repression of all individual freedoms which, of course includes the complete inability of Muslims to leave Islam. We see threats of violence against those who dare speak out against Islam. We find Royal families spending lavishly on palaces, planes, whores and otherwise, or authoritarian violent dictators or authoritarian violent theocrats. I want none of it and am not embarrassed for saying so. In fact, those who critically judge me for saying so should be embarrassed with themselves. If… Read more »