The Daily Nexus
Volleyball
Gauchos Look to Break Even in Conf. Play on Road vs. Rival Cal Poly
October 27, 2016 at 5:00 am by Liam Bailey

The UCSB women’s volleyball team will play only one match this weekend against division rivals Cal Poly after four straight weekends of at least two matches being played per weekend.

The Gauchos come into the match 13-9 overall, at 4-5 in the Big West which ties them with UC Irvine for fifth in the conference. Cal Poly is two games ahead of the Gauchos at 6-3 in the conference and 13-7 overall; they sit in third place behind Long Beach State and Hawaii.

Last weekend, the Gauchos took the LBSU 49ers to five sets, almost sending them their first conference loss on the year. They were able to rebound against the Cal State Northridge Matadors, winning in four sets and splitting their matches for the fourth consecutive weekend.

“We feel really good with how we’ve been playing the last three matches,” Coach Nicole Lantagne Welch noted. “I think we can carry that momentum forward and keep working on some little things to improve on this week.”

The Mustangs played the same two opponents — with the exact same results — though they fell to Long Beach in only four sets as opposed to the Gauchos’ five.

UCSB was swept by the Mustangs in their first outing of the year 25-23, 25-21, 25-16 in a match in which Cal Poly seemed to gain momentum with each passing set. Their hitting percentage increased in each of the three games, ending at a stellar .419 in the third.

On offense, the Mustangs were led by their outside hitters — junior Raeann Greisen and sophomore Adlee Van Winden — who achieved 13 kills apiece. Greisen had a stellar .423 kill percentage on the day, a match high for those who played in all three sets. 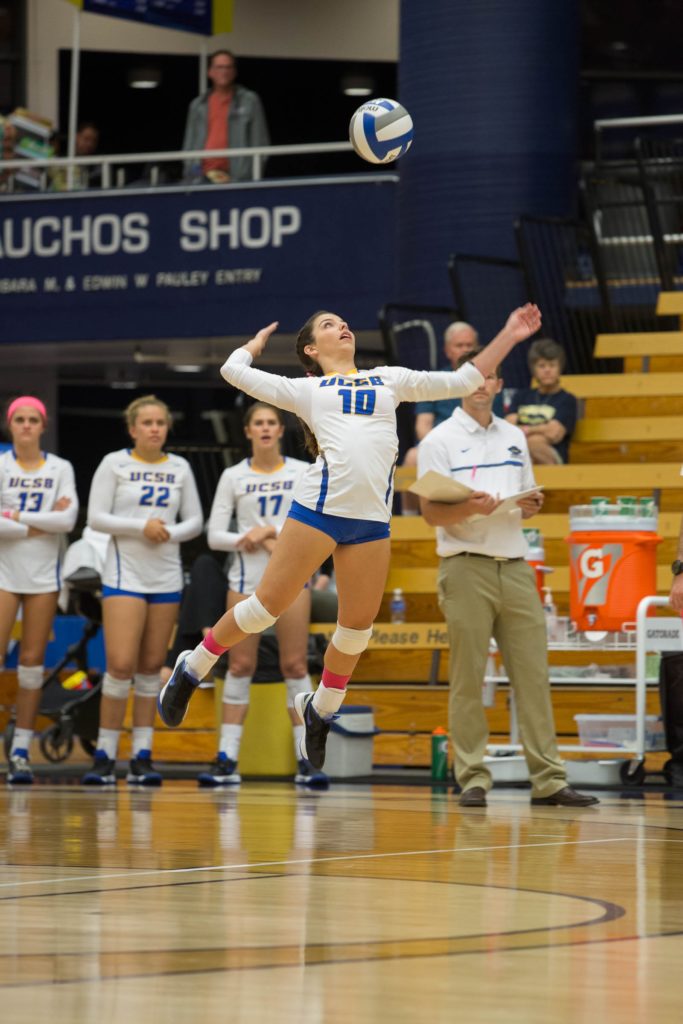 Juley has been dominant of the Gauchos of late, putting her teammates in perfect situations for kills. She remains fourth in Big West play with 10.50 assists per set but will face off against the most prolific setter in the conference, junior Taylor Nelson.

Nelson has been a constant catalyst for success on this Cal Poly team, with 12.09 assists per set and almost 400 total in conference play. Last outing against the Gauchos, she recorded 36 assists in three sets of work, and will need to be limited if UCSB hopes to come away with a win this time around.

The biggest beneficiary of Nelson’s hard work has been Raeann Greisen, whose 4.16 kills per set on a .334 kill percentage — only 35 total errors on 293 attacks — have made her the most efficient high volume scorer in the Big West throughout the conference schedule.

Cal Poly’s defense relies heavily on the effort of sophomore libero Katherine Brouker. Her 14 digs were a team high last time out against the Gauchos, and she ranks fourth since conference play started with 4.25 digs per set.

Coincidentally, one of the two players she trails in digs over that span is UCSB sophomore defensive specialist Emilia Petrachi, who averages 4.59 digs per set. Petrachi also bested Brouker in digs in the first match between the teams, finishing with 15 on the evening.

Gaucho senior middle blocker Phoebe Grunt will participate in what could be her final match against Cal Poly after missing the first contest with the conference foes.

Newcomer Lindsey Ruddins has also made a huge impact, especially considering that she’s returning from injury. In fact, the freshman just won conference freshman of the week for the fourth time this season, most of any first-year, after averaging 4.89 kills per set last weekend and acquiring a .330 hitting percentage.

The Gauchos are pumped for this weekend as their recent play as well as the upcoming opponent are providing all the inspiration they need.

“We’re looking forward to the matchup,” Coach Lantagne Welch said. “Obviously, it’s a rivalry game, so it brings out a lot of excitement and energy from our team.”

UCSB will travel to San Luis Obisbo on Friday, Oct. 28, and the teams will play at 7 p.m.

A version of this article appeared on page 8 of October 27, 2016’s print edition of the Daily Nexus.