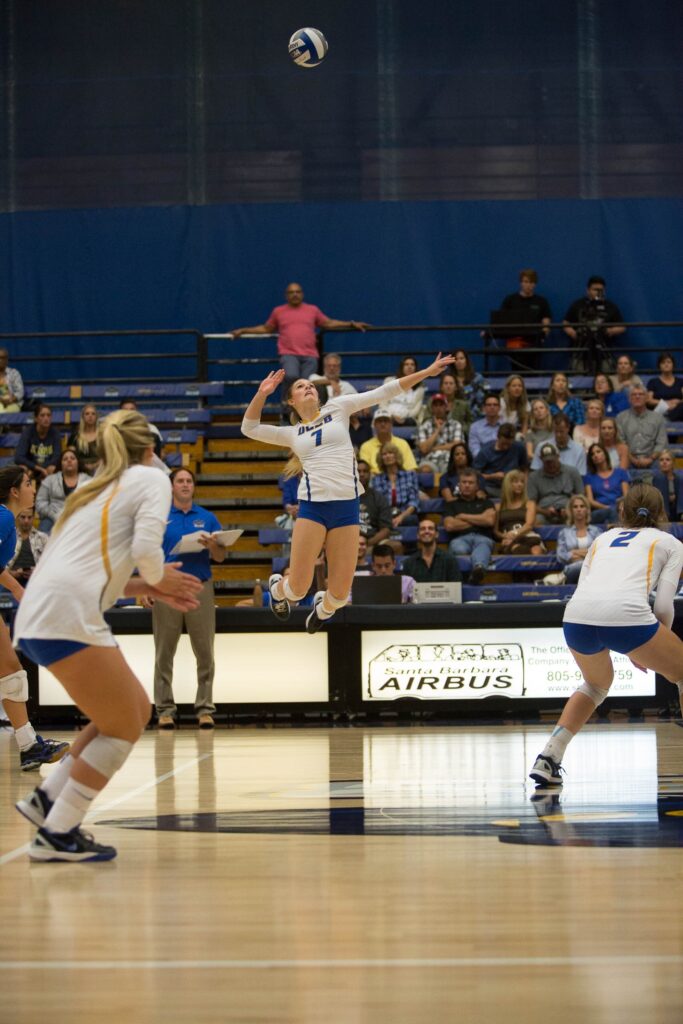 Now 13-9 overall, 4-5 in the Big West, UCSB is tied for fifth in the Big West standings with UC Irvine. The 49ers finished the weekend with the continuance of their unblemished conference record, earning victories over UCSB and Cal Poly and improving to 15-7 overall and 9-0 in the Big West. The losing woes remained for the Matadors, who lost their sixth consecutive match to fall to 6-14 and 2-6.

With the challenge of being in the middle of the pack within the Big West standings as the season nears its end, the Gauchos are facing dire circumstances as their postseason chances are on the line.

“We’re trying to win out. We’re trying to get an opportunity to go in the postseason because I think we can really make a run,” said senior middle Elizabeth Sheffield. “We’ve had some pretty tough losses this season, but when we play the way we played tonight, we can do really well.”

The Gauchos were able to take the Big West leading Long Beach State 49ers to five sets, something that had happened just twice in conference play prior to Friday’s match. UCSB had not yet played a fifth set since beginning the conference schedule on Sept. 23.

For the first time against a Big West opponent this season, Long Beach State found itself in a two-set hole early in the match.

The match’s first set began with a furious back-and-forth; the score tied up 6 times before settling at only 10 apiece.

UCSB was able to successfully hold off the 49ers for the remainder of the set, though the pesky 49er squad would never trail by more than three until first-year defensive specialist Maxine Burke’s service ace gave the Gauchos a 25-21 win.

Megan Rice and Lindsey Ruddins would again prove decisive characters in the second frame, with two kills each in UCSB’s first eight points of the set. First-year middle blocker Rowan Ennis would add a kill of her own, and two service aces early in the set from Lexi Rottman would aid an early 9-3 Gaucho lead.

The 49ers would did their best to close the gap, but the Gauchos contained LBSU with an excellent offensive effort, out-hitting their opponent for the second consecutive set, this time .314 to .281.

Sensing their backs against the wall, Long Beach came out firing in the third set, the most lopsided of the entire match and a decisive turning point in what had been UCSB’s night.

UCSB was sloppy to say the least in the third, as they would produce their first eight-error set of the night, coincidentally not their last of the sort.

Despite several errors early on, the Gauchos still fought to a 14-13 deficit, capped by a block from Rowan Ennis and Megan Rice.

The train came off the tracks at that point, however, as a series of kills, including three from junior middle blocker Ashley Murray, and attack errors from UCSB would result in an 11-2 set-ending run for LBSU.

The 49ers dominated the Gauchos in hitting percentage, racking up a .440 mark of their own while holding UCSB to a minuscule .000.

After playing to an eight-point tie in the fourth, a five-point LBSU run would set the difference between the two teams for the majority of the set’s remainder. A late four-point run, including two kills from Lindsey Ruddins, would bring the Gauchos within three, but a kill from sophomore outside hitter Megan Kruidhof assisted by redshirt sophomore setter Missy Owens sent the teams to a fifth set.

The tie-breaker was the closest set of the match, with neither team ever gaining more than a two-point lead.

Kills from Chanel Hoffman and Lindsey Ruddins, accompanied by an attack error from senior outside hitter Nele Barber, put the Gauchos ahead 12-11, a victory against the Big West leaders seemingly within reach.

LBSU’s resilient offense flexed its muscles once again, though, as Kruidhof killed two attacks, first-year libero Hailey Harward added another, and Nele Barber finished the job with a kill to give the 49ers a 15-13 set win, remaining unblemished on the season.

Barber was the star of the evening, dominating with 22 kills on a .442 percentage, only three errors and 12 digs. She now stands at second in the conference with 4.17 kills per set in Big West play, and fifth with 4.23 digs per set over the same span.

Missy Owens was yet again everywhere setting up her teammates, as her 45 assists added to her 11.37 assists per set against Big West competition, a mark that ranks second in the conference.

Lindsey Ruddins was back in early season form for the Gauchos, and her 25 kills (.361 kill percentage) were a match high. Senior middle blocker Phoebe Grunt also continued to improve after returning from injury, scoring 12 kills on 26 attempts (.308 percentage).

Sophomore libero Emilia Petrachi continued to lead her team on the defensive end with 16 digs, second in the match to LBSU’s Hailey Harward.

The match showed the 49ers’ ability to come through in tough spots, as they continued their season-long winning streak in five-set matches, maintaining their storybook year and improving to 15-7 overall and 9-0 in the Big West.

Despite Friday’s heartbreaker, UCSB came out with a strong performance in its following match against Cal State Northridge.

A strong first set saw the Gauchos build a 24-16 lead, and despite a flurry of UCSB errors that got CSUN to 20 points, Megan Rice was able to finish the deal with a kill to seal the game.

The Matadors were much more collected in the second set, playing the Gauchos to a series of ties before grabbing a 20-19 lead late. Two kills from Lindsey Ruddins as well as one from senior middle blocker Elizabeth Sheffield would put the Gauchos up, and despite a short back-and-forth, they would hold the lead to gain a 2-0 set advantage.

CSUN won a close third set 25-23, with no team ever gaining a large margin over the other. After blowing a 2-0 set lead on Friday, however, the Gauchos were not going to let another match slip between their fingers.

The fourth set was UCSB’s best, as they produced a kill percentage of .407 on their way to a 25-17 win. A 6-1 run to start the set would prove to be the defining stretch; the cushion would be sufficient to suppress each Matador burst.

Outside hitters Julie Haake (senior) and Aeryn Owens (sophomore) held down the offensive end for CSUN, with 22 and 16 kills respectively. Owens ranks fourth in Big West play with 4.03 kills per set, while Haake had one of her more impressive matches of the year as she normally averages 2.94 kills per set (14th in the conference).

Owens added 15 digs, second on the team to junior libero Katie Sato, who accumulated 19 of her own. Junior setter Lauren Conati led the match with 48 assists and contributed a solid eight digs as well.

For the Gauchos, Sheffield produced a career evening, with nine kills on 13 attempts for an über-efficient .615 kill percentage.

“We needed more offense and Liz was outstanding coming in off the bench for us,” Head Coach Nicole Lantagne Welch said. “She was pretty much unstoppable out of the middle.”

Redshirt first-year setter Hannah Juley was the ultimate teammate, creating opportunities for her fellow Gauchos all over the court on her way to 47 assists. After 57 in the match against LBSU, she now sits at third in the Big West with 10.50 assists per set against conference opponents.

Ruddins was again the offensive standout for UCSB, as her 19 kills led the team. She and Chanel Hoffman both rank in the top 10 for kills per set against the Big West, with 3.46 and 3.44 respectively.

The Gauchos have fairly consistently been able to beat teams around their record this season, while running into trouble against the more difficult competition.

“It comes down to the little things,” Coach Lantagne Welch noted. “The discipline on defense, a little more effort in your own approach so the offense is cleaner. It’s remembering what’s working for you and resorting to the game plan, so it’s a lot of little things that combine to help you take that next step.”

UCSB will continue its postseason quest against division rival Cal Poly on Friday, Oct. 28 at 7 p.m. in its only match next weekend.