There are a total of 29 international student athletes from every corner of the globe playing Big West soccer, and UCSB has nine, tied for the most in the conference with CSUN. The heavily international roster creates a dynamic that most other collegiate programs are never exposed to.

When high school seniors commit their futures to college programs, they look for places that promote a preferred style of play or mentality, and it seems that Head Coach Tim Vom Steeg has fostered an environment that looks extremely appealing to kids from overseas. Six of the nine freshmen on the current Gaucho roster joined from a range of nations outside the United States.

Just this week, four of the first-year internationals were listed to the TopDrawerSoccers.com midseason Top-200 Freshman list. Midfielder Daniel Amo (Ghana), fullback Mateo Restrepo Mejia (Canada), winger Noah Billingsley (New Zealand) and goalkeeper Titouan Le Roux (France) are the quartet of top prospects. Amo is the highest ranked at No. 20 on the list and the other three all have experience in the youth setups of their respective national teams. 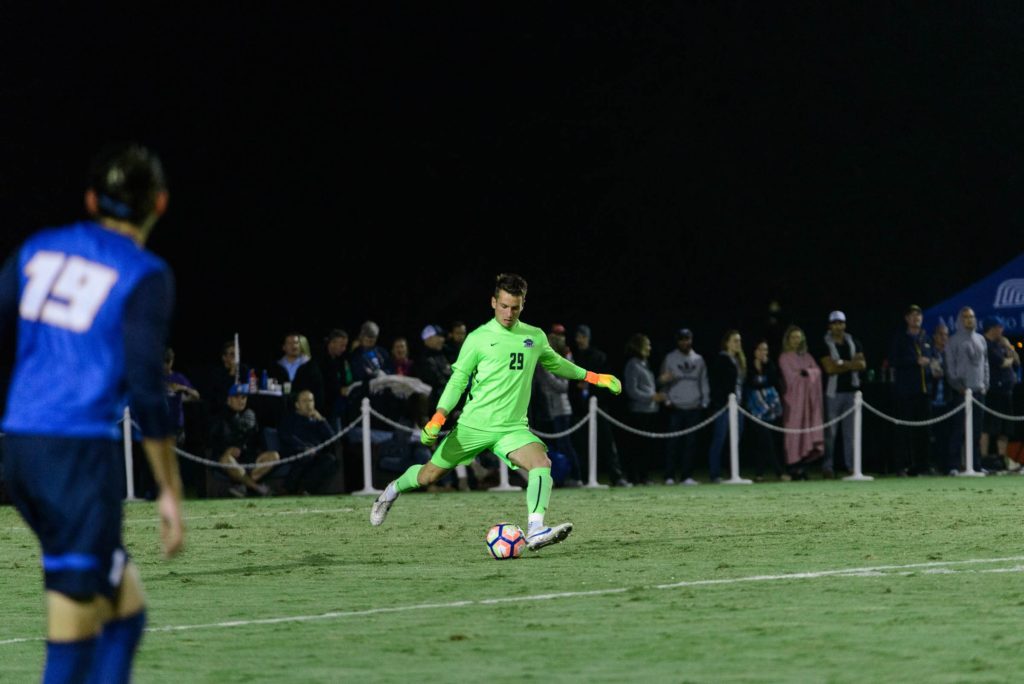 Apart from Amo, who suffered a groin injury early in the season that has kept him out for four weeks, the other three have locked down spots in Vom Steeg’s main starting nine, quickly adapting to life in Santa Barbara on and off the pitch.

Le Roux and Mejia have been crucial staples in a shifting defense, with the keeper having started every match without sitting out a minute all year. Mejia has started five matches, but has appeared in every game, serving in countless crosses in his wing-back role.

“When I came here it was with the objective of playing, so I was ready to play and ready to do everything,” Le Roux said. “It’s my job to play, so I’m glad to be the starting goalkeeper, and I want to keep playing so I keep trying to do my best to keep playing.”

Billingsley, who played at the U-20s World Cup two years ago for the New Zealand side, has become a key piece of UCSB’s marauding attack, with two goals and two assists.
To the credit of his growth over the year, the winger’s dribbling and passing behind striker Nick DePuy has been increasingly noticeable as the year goes on as he grows into his starting role. 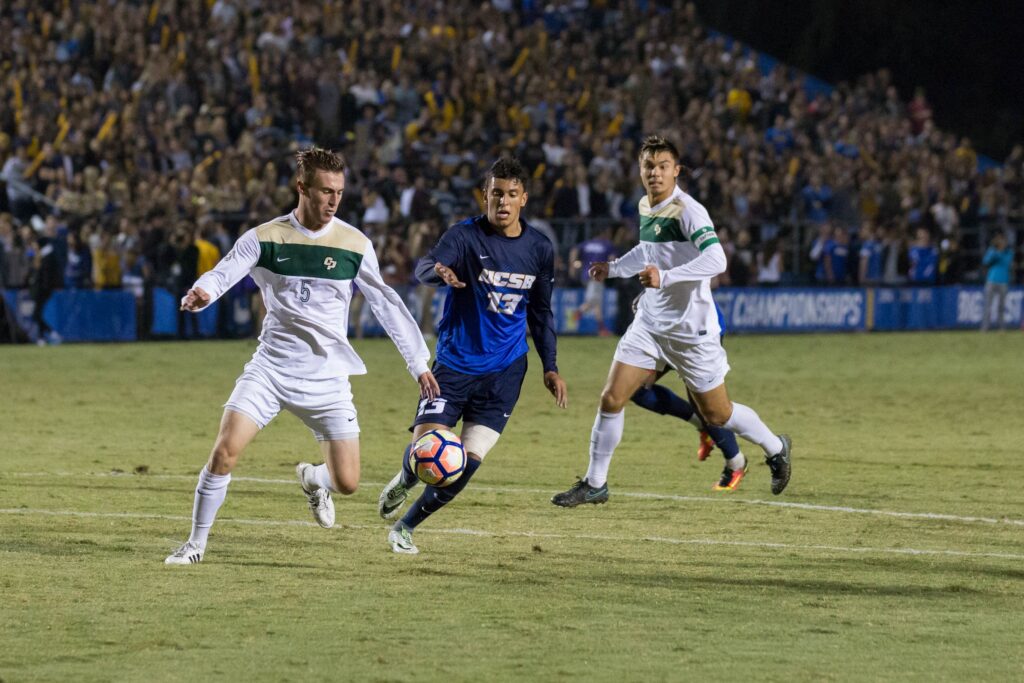 Amo’s injury forced him to endure a testing month of recovery as the promising midfielder eagerly worked his way back into training. His rehab has almost paid its dividends as he prepares to make a brief cameo in Saturday’s home leg of the Blue-Green rivalry.

“It was frustrating and it hurts, but, I mean, it’s part of the game. But my teammates were right there, very supportive, so I never thought ‘I’m done,’” Amo said. ”They were always there reminding me, like, ‘Oh, you gotta go to rehab.’ The guys were all supportive, so it made it — I wouldn’t say okay because it’s still an injury — but they made it comfortable to be around and go to the games.”

In his time out, the Accra, Ghana native credited the team’s welcoming and supportive team spirit with helping him through the recovery process. One teammate Amo thanked specifically was senior midfielder Seo-In Kim, who was recovering from a long-term injury alongside him.

The two spent hours in the gym together fighting back to full strength, and now that both players are back in the rotation, Amo and Kim will get to play together for the first time at some point during the last few games of conference play.

“It’s amazing to see Seo get ready to play because when I got here I didn’t get to see him play, so I wanted to see him play,” Amo said. “He had a lot of sessions with me and I was like, ‘Oh my god, I want to see Seo play.’ This weekend at Cal Poly we were just knocking the ball around and it made me so excited to have him on the field.”

The relationship between the Ghanaian and Kim, a midfielder born in South Korea before moving to the States, goes to show how UCSB’s soccer program has become a place for multicultural interaction with one of the most diverse squads in the country.

It’s become a place where student-athletes from every possible background get to collaborate, and Billingsley commented on how joining up with players from so many cultures even shows in the way the Gauchos play.

“Almost half of our team are from other places in the world, so everyone gets along and there’s no cliques, which is nice,” Billingsley explained. “Everyone is used to a different style of play and comes from different backgrounds, and I think the chemistry is just right, and that alone has won us a couple of games.”

Vom Steeg’s style of play, a high-pressing 4-3-3 with attacking wing backs, has allowed the German midfielder Kevin Feucht to shine this season — the junior leads the Big West with 10 goals — as the focal point of the Gauchos’ exciting offense that allows the creative players to express themselves.

With the influence of already having upperclassmen foreign players on the team helping the younger guys adapt to the new pressures of college life and finding resources on campus, it’s clear how much these international athletes stick together.

Le Roux mentioned the helpfulness of his teammates as he struggled with people “speaking too quick for me,” and the assistance extended to basic tasks associated with moving somewhere new.

“The older guys know about stuff we have to go through, like getting a new phone plan and bank account and that sort of stuff, and then all the other things like being away from home; it’s really nice to have people there whenever I need to talk about something,” Billingsley said.

The benefits of a multicultural presence extend beyond the lines of the field as players learn about and compare their teammates’ ways of life with one another.

The Harder Stadium melting pot is a rare occurrence in college sports, and it is a premier example of the intrigue of diversity in soccer.