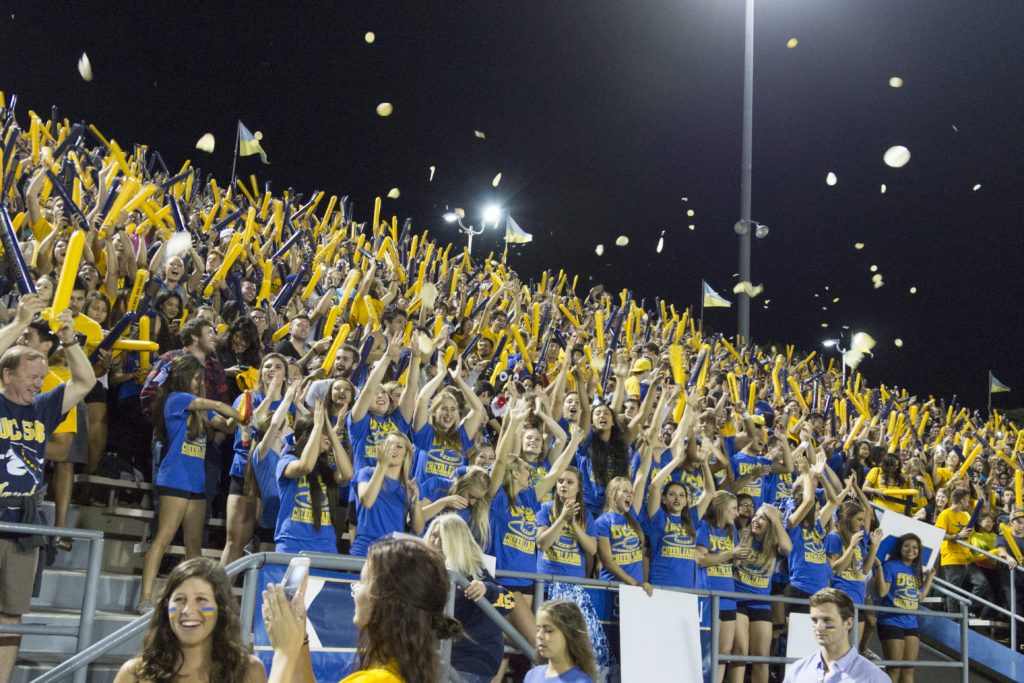 Tortillas took to the air as UCSB scored the first goal of the night. Dustin Harris / Daily Nexus

With the bleachers filled to the brim, the traditional chant of, “Oleeeeeeeeeeeeé, olé, olé, oleeeeé, Gauchooooos, Gauchooooooos,” encompasses the depths of Harder Stadium. Cheers for goals scored and jeers for penalties missed echo across the field, the voices of thousands of students, family members, alumni and fans all coming together.

This reality reflects the historical rivalry between UCSB and Cal Poly in the sport of men’s soccer. Better known as the Blue-Green rivalry, it is a rivalry that has emerged as the nation’s most prolific duel to date.

Ranked as the No. 1 rivalry on CollegeSoccerNews.com’s list of “The Fourteen Greatest Rivalries in College Soccer,” the meeting between the Gauchos and Mustangs has continued to meet the expectations and anticipation of audiences nationwide.

With both programs being members of the Big West North Division, the storied matchup is an annual battle that takes place twice a year, giving fans the opportunity to brag and express pride in supporting the Gauchos or Mustangs.

A match full of intensity and high emotion, goals are a rarity that take much effort, as 16 of the last 19 matches between UCSB and Cal Poly have been decided by one goal or have resulted in a draw.

Thus far, it has been UCSB with the advantage over Cal Poly. The Gauchos’ all-time record when facing their Central Coast rival is 46-18-8 after a recent 2-1 defeat of the Mustangs last Saturday while on the road in San Luis Obispo.

In his 18th season with UCSB, Head Coach Tim Vom Steeg owns a 23-7-6 record when facing the Mustangs. It has been nearly two decades since his takeover of the Gauchos’ sideline, yet no introduction to the Blue-Green rivalry was needed for Vom Steeg in his transition to the helm as he was a student and soccer player at UCSB from 1985-1988.

While the rivalry is one that expands across generations of athletes, students and fans, the classic match has consistently increased in popularity on a national scale.

Since the start of the 2007 season, the total amount of people that have witnessed the Gaucho-Mustang battle exceeds the 200,000 mark.

The contest has even surpassed the attendance numbers of postseason competition that has occurred in both NCAA Tournament and College Cup games, resulting in eight of the highest attended collegiate games in the U.S. in the last four years.

Although on the road, last Saturday’s attendance of 11,075 signaled the seventh sellout for a Cal Poly men’s soccer game in program history. It is a game that has sold out Alex G. Spanos Stadium for the past six seasons.

Well deserving of its moniker as the “Soccer Heaven” of collegiate soccer, Harder Stadium has been a hub to the multitude of attendance records set over the years.

Over the course of nine straight years, UCSB has led Division I men’s soccer in average attendance. For the last two seasons, it has recorded the top average of 3,844 fans per match. The Gauchos’ 5,873 attendees per match in 2010 remains the highest average since the NCAA began accounting for the statistical category in 1998.

Last season’s two meetings concluded with single-game attendance highs for both programs as they were the only two schools to reach tens of thousands.

The total of 14,919 fans that attended the second matchup between the Gauchos and Mustangs at Harder Stadium ranked above all games on the list. Following was the first game of the 2015-2016 Blue-Green series in which 11,075 people were in attendance.

Since the reinstatement of men’s soccer into the Big West Conference in 2001, the Blue-Green bout has gradually grown each year as the purpose of the rivalry has extended beyond the field, becoming a ritual amongst both universities. The Blue-Green game is the only exception in which students are allowed to storm the field at Harder Stadium.

The legend of the Blue-Green rivalry continues this Saturday, Oct. 22, at 8 p.m. and will be nationally televised by Fox Sports Prime Ticket for the fourth consecutive year.