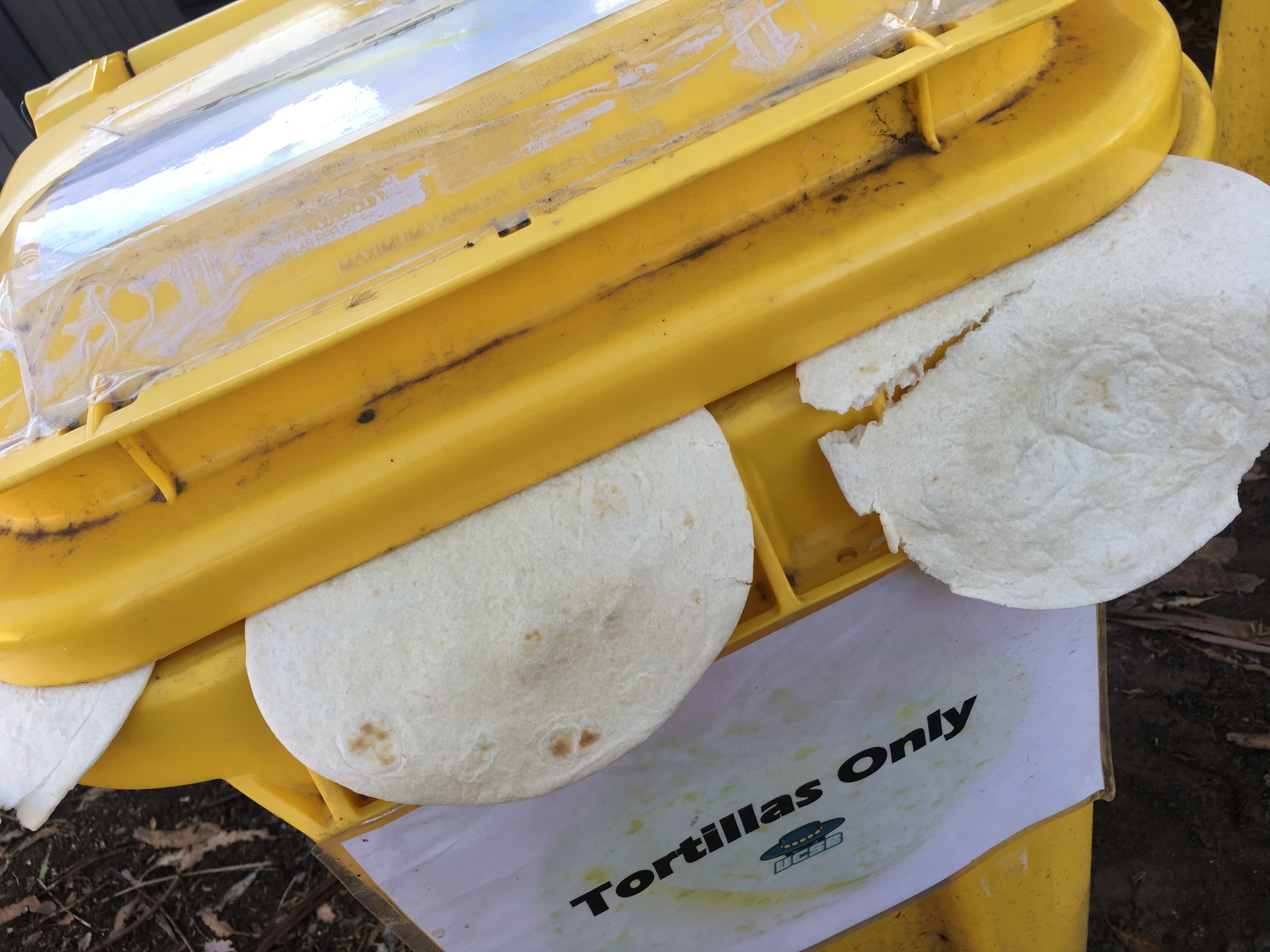 It is UC Santa Barbara tradition for students to fling tortillas onto the field after a goal during home soccer games, a custom that will undoubtedly continue into Saturday’s match against rival Cal Poly.

In the immediate aftermath of Saturday’s game, though, students might also expect to see a UCSB library employee on the field collecting the tortillas as she has done at every home game for almost a decade.

Margaret Rankin describes herself as someone who has been reducing, reusing and recycling “before those words were ever known.” She recalls going to a soccer game at Harder Stadium about seven years ago and seeing the field laden with several hundred pounds of tortillas.

She naturally began to question their fate and soon learned that field staff disposed of them in the landfill dumpster.

“It was such a waste; to just send them to the landfill is just appalling,” she said. “I thought, ‘If they’re going to continue this, then let’s do something about it that’s actually helpful.’”

The librarian first asked UCSB Athletics if she might take the tortillas to add to her own backyard compost operation. She later decided to collect the tortillas for on-campus composting.

Associated Students Recycling (ASR) partnered with her shortly after and supplied designated tortilla bins for her to wheel over to their on-campus composting facility just a couple hundred feet from the stadium.

According to Sarah Siedschlag, the A.S. environmental programs advisor and former ASR program coordinator, the A.S. Department of Public Worms, formerly a part of ASR, had been composting the tortillas in their worm bins when she came in as coordinator in fall 2012.

The mass of tortillas proved “too much for the worms,” she said, and so the program opted to have the tortillas industrially composted off-campus in fall 2013.

Tortilla-flinging began in 1995 during an ESPN-televised basketball game against DePaul University when the student section threw tortillas on the court after the first basket. The tradition was adopted for soccer matches about a decade later.

The flying tortillas were especially problematic during basketball games; officials whistle any object thrown onto the court as an automatic technical foul for the home team, giving a free throw to the opposing team. Known as the “tortilla technical” in the 1990s, the tradition once cost UCSB three technical fouls in a close game against Pacific University in 1997, prompting former head coach Jerry Pimm to take a microphone and plead that audience members act more like adults.

To avoid such outcomes, UCSB Athletics does not allow tortilla-throwing at basketball games or soccer games.

Nonetheless, UCSB Athletics currently has a “quick response plan” in place whereby field staff retrieve the tortillas almost as soon as they land on the field. The staff then bag the tortillas and leave them on the sidelines for Rankin to collect later.

Rankin is not allowed on the field during the game, she said, but the exclusive pass granted to her by UCSB Athletics allows her to gather the tortillas in the moments following the game’s conclusion. She said her pass reads that she is the “Director of Phylum Annelida” (Annelida is the phylum to categorize segmented worms, which are used for composting).

Rankin said she has found students to be quite “inventive” as to how far across the field they can fling tortillas. Frozen tortillas typically go further because of their rigidness, she said, as do thick tortillas and baked tortillas.

Tortilla-throwing is “a good release” for students, Rankin said, but she doesn’t want to encourage it.

“I just try to get a better solution to what could have been wasted,” Rankin said.

In her years collecting tortillas, Rankin said she has hardly received thanks for what she does. This is fine, she said, because her work is completely voluntary, and she aims to keep a low profile.

“At least I make millions happy, which just so happen to be worms,” she said.

We were tossing tortillas at basketball games long before 1995!
(Yes… I am old.)