The Daily Nexus
Science & Tech
Blurring the Boundaries of the Mind
October 20, 2016 at 9:41 am by Dana Jessen

Tucked away in the Department of Psychological & Brain Sciences domicile is the University’s interdisciplinary brainchild, the S.A.G.E. Center for the Study of the Mind, where researchers are encouraged to come together in order to collaborate and investigate questions such as “How does the mind work?” and “How does it affects what people do?” in order to understand the human condition.

Most commonly, the mind is referred to as the bedrock of human consciousness. It’s the feeling of “I” that is somehow both related to, and separable from, the body, and the element that enables us to be aware of our experiences in order to think and feel.

The question of how the mind and the body are related has traversed centuries, back to when philosophy and psychology were practiced together, most notably with Rene Descartes’ thesis of mind-body dualism.

At the S.A.G.E Center, these researchers do not only study the more traditional fields of psychology, neuroscience and medicine. They also examine a wide range of disciplines including history, literature, philosophy, economics, anthropology, linguistics, comp

Interdisciplinary research is incredibly relevant nowadays, and advances in chemistry, engineering, mathematics, biology and physics have created tools which enable neuroscientists and psychologists to study these questions about the mind in novel ways.

Hybrid subfields such as cognitive neuroscience, which studies the biological processes that underlie cognition, and behavioral neuroscience, which uses biology to study the mechanisms of behavior, have been greatly augmented due to these new technologies and are being used as gateways to study how the mind affects us.

The investigation of the mind must not only come from psychologists and neuroscientists, but must also include participation at a cross-disciplinary level. That’s where the S.A.G.E. Center comes in.

In order to inspire and encourage collaboration, the S.A.G.E Center, run by director Michael Gazzaniga, hosts researchers from around the world to give free public talks. The talks are given in Psychology 1312 on Thursdays at 4 p.m. (unless otherwise noted). 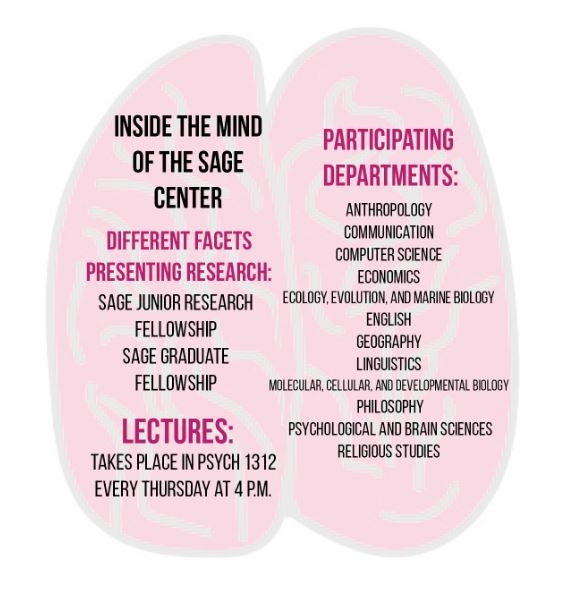 On Oct. 10, David Poeppel, professor of psychology and neuroscience at New York University, commenced this year’s agenda with his talk titled “Speech is Special and Language is Structured.” He is scheduled to speak again this following Monday, Oct. 17 on “The Insufficiency of Correlational Cognitive Neuroscience.”

In addition to the free public lectures, the S.A.G.E. Center hosts distinguished fellows each year for extended residencies in order to delve deeper into these questions. Many of these researchers will also give a series of talks during their stay. David Poeppel is one such distinguished fellow for this year.

The American Psychological Association (APA) defines Psychology as “the study of how the mind influences behavior”(slight paraphrase possible — written from memory).

The Mind (whatever that term refers to — there is no hint of a coherent explanation [much less AN explanation] from the APA) does not behave. People behave.

Such is the state of contemporary academic Psychology.