Lapses on defense in the second period of Sunday’s match against No. 3 USC ultimately led to the 16-6 defeat of the No. 7 UCSB men’s water polo team.

With the score tied 4-4 at the 6:46 mark of the quarter, things took a turn for the worse when the Trojans put together a 5-0 scoring run to build a comfortable lead over the Gauchos as the game progressed.

Finishing its sleight of five games in four days with a 0-2 record against two of the nation’s top three teams, UCSB had its three-match winning streak end in its loss to USC. The Gauchos are now 11-6 overall. Meanwhile, Southern California earned its seventh consecutive victory to improve to 15-1 and remains undefeated at home with a 4-0 record. 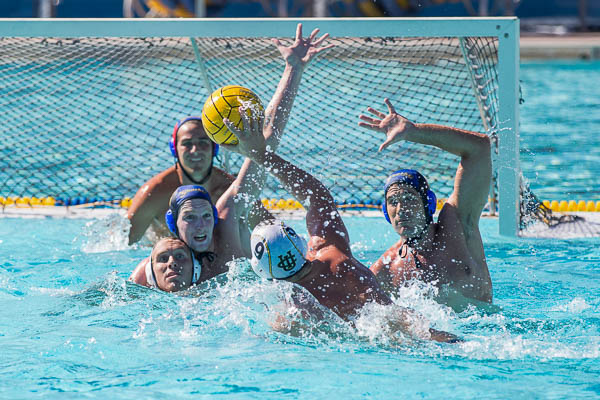 The afternoon match held at Uytengsu Aquatics Center began with much intrigue as the two teams traded scores.

Striking first was UCSB with a goal by freshman utility Ivan Gvozdanovic. After leading Santa Barbara with a team-high four goals in its victory over Whittier the day before, the Serbian native continued his offensive dominance, leading the Gauchos with a hat trick.

Answering for USC on offense was junior driver Matteo Morelli to tie the score at 1-1. Despite UCSB managing to exchange goals with USC through the opening minutes of the second quarter, sparking the Trojans’ run was the commanding emergence of junior driver Blake Edwards.

An All-American and All-MPSF First Team selection, Edwards reached the back of the net three times during USC’s 5-0 scoring stretch. He finished with a match-high five goals, increasing his count of multi-goal games to eight in addition to having a score in 13 of the Trojans’ 16 games.

It was a monumental performance for the team’s leading scorer as Edwards became the 33rd player in program history to reach a career total of 100 goals. His five first-half scores guided the Trojans to their 11-5 lead at halftime.

The flow of the game was at a standstill in the beginning stages of the second half as both teams attempted a combined nine shots before having the goal drought ended by USC’s junior driver Lazar Pasuljevic’s score with 2:19 remaining in the match.

Scoring UCSB’s lone goal in the second half was junior attacker Nick Wiley. Despite the Gauchos taking a more efficient approach to their shot selection, improving from a 0.81 shooting percentage on 37 shots in their first meeting against the Trojans to a .222 percentage on 27 shots on Sunday, UCSB remained unable to match the Trojans’ attack.

Ending Sunday’s match with a .485 shooting percentage on 33 shots, USC’s persistence in power-play situations helped the team collect another victory. It finished 3-for-8 on power plays, scoring two in the last two minutes of the fourth quarter to cruise to a 16-6 win.

In spite of the loss, it was a solid outing for Gaucho senior goalkeeper Liam Lenihan III as he recorded 11 saves, three of which occurred during power plays.

UCSB will return to Campus Pool to face No. 6 Long Beach State on Thursday, Oct. 20 for both its second conference game and night match of the season.