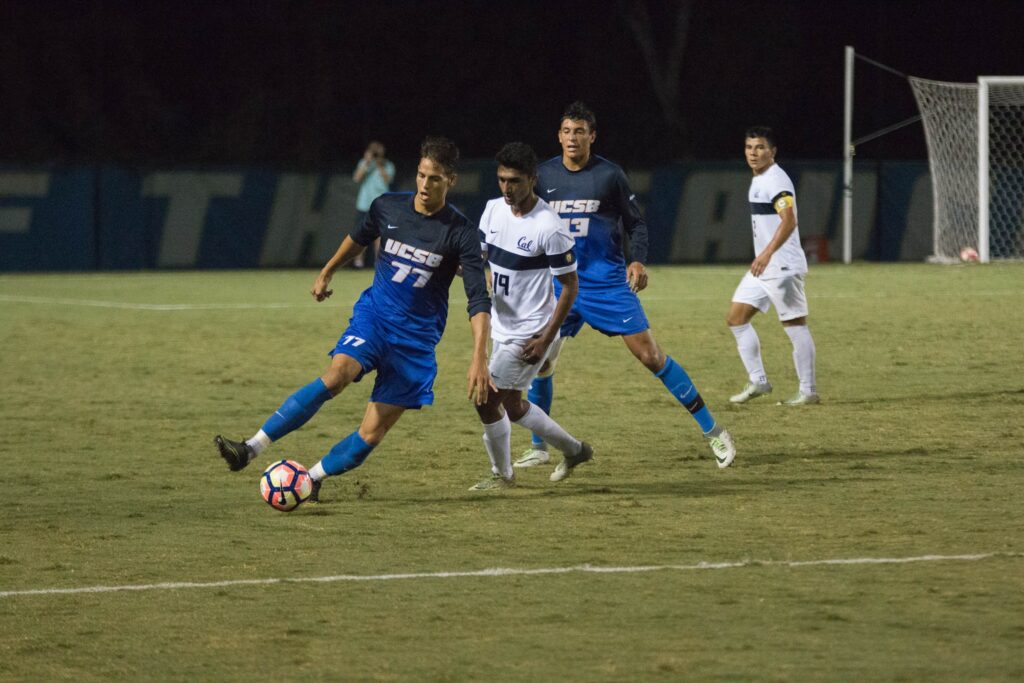 Having now played five conference matches this season, and looking rather dominant in most of them, the UCSB men’s soccer team turns its attention to its most hated and bitter rival, the green in the blue-green clash, Cal Poly.

Santa Barbara heads into this big time match 7-5-2 overall and boasting a 3-0-2 conference record halfway through the Big West season. Cal Poly hosts its visiting rivals with a weary 3-7-2 overall record and a Big West record of 1-3-1.

While the Mustangs are en route to finishing its worst season since 2011 when they finished 6-9-3, 3-6-1 in conference play, they still have shown the ability to beat top quality teams. Earlier in the 2016 campaign, Cal Poly upset then No. 6 UCLA 1-0 at home thanks to the senior forward Justin Dhillon’s early goal scored in the ninth minute.

Since that win in late September, Cal Poly began conference play and had yet to notch a win being shutout twice in contests at Big West South Leaders UC Riverside and against UC Irvine this past Saturday before picking up its first conference victory against UC Davis 2-1 on Thursday.

Hoping to take advantage of the Mustangs’ struggles this year, the Gauchos will look to sweep their bitter, green rival for the first time since 2006 when they won both matchups by an identical score of 2-0. Coincidentally, that  season was the last — and only — time Santa Barbara won a NCAA championship after defeating UCLA 2-1 in the title match.

All-time, UCSB dominates the series against Cal Poly 45-18-8 and 22-7-6 during the Vom Steeg Era. However, last year the Gauchos went 0-1-1 against the Mustangs and over the last five seasons have gone 3-4-3 in the previous 10 matches, with the two teams tying in one of the two games in each of the last three seasons.

Last season, Cal Poly won its home match 3-2 in a crazy double overtime game, with now senior defender Kody Wakasa delivering the golden goal in the 103rd minute. Wakasa was named to the Preseason All-Conference Team, has put through one goal — tied for second best on the team — and has been solid on the back end this season, although the defense has been outscored 16-10.

Leading the offensive charge for the Mustangs this season has usually been Dhillon, who scored seven of the team’s 10 total goals. The senior forward has had a brilliant career thus far as his goals (15), total points (40) and shots (137) are all tied for second most among active Big West players, while his assists rank third (11).

Blocking the net for Cal Poly all season has been junior Eric Kam, who, after shutting out No. 6 UCLA, was honored with his first career Big West Men’s Soccer Defensive Player of the Week. This season the goalkeeper has played well, registering 31 saves on the season while surrendering 12 goals in 10 matches.

In order to pull off the sweep, the Gauchos will need to be able to rely on key pieces who have been solid all season, such as junior midfielder Kevin Feucht, who leads the team in goals scored (8) and points (18)

Another solid performer this year has been junior forward Ahinga Selemani. The Ann Arbor native, third on the team in goals with four and first on the squad in game-winning goals with three, put on spectacular performances against the Anteaters and Matadors last week and is worthy of being named Big West Offensive Player of the Week for the first time in his career.

Against Sacramento State, Selemani continued his impressive season and scored his third goal in as many matches in a game that ended in a 1-1 tie.

The rekindling of this rivalry always makes the fall season of sports that much more memorable. Last year at Cal Poly, the game was sold out with a max capacity crowd of 11,075, while the matchup at Santa Barbara’s Harder Stadium had the second largest campus crowd in NCAA history with 14,919 spectators.

With 13 of the 19 largest crowds being courtesy of UCSB-Cal Poly matchups, it is clear that not only do the players love this rivalry, but the fans of NCAA soccer, current students at their respective schools and alumni do as well.

The Gauchos are set to face Cal Poly in the first of their two matchups Saturday, Oct. 15 at 7 p.m. at Alex G. Spanos Stadium.