As students filled the seats of campus lounges Oct. 4 to view the 2016 Vice Presidential Debate, two lucky university students enjoyed an even closer view of the event seated in front of the live debate stage in Farmville, VA. 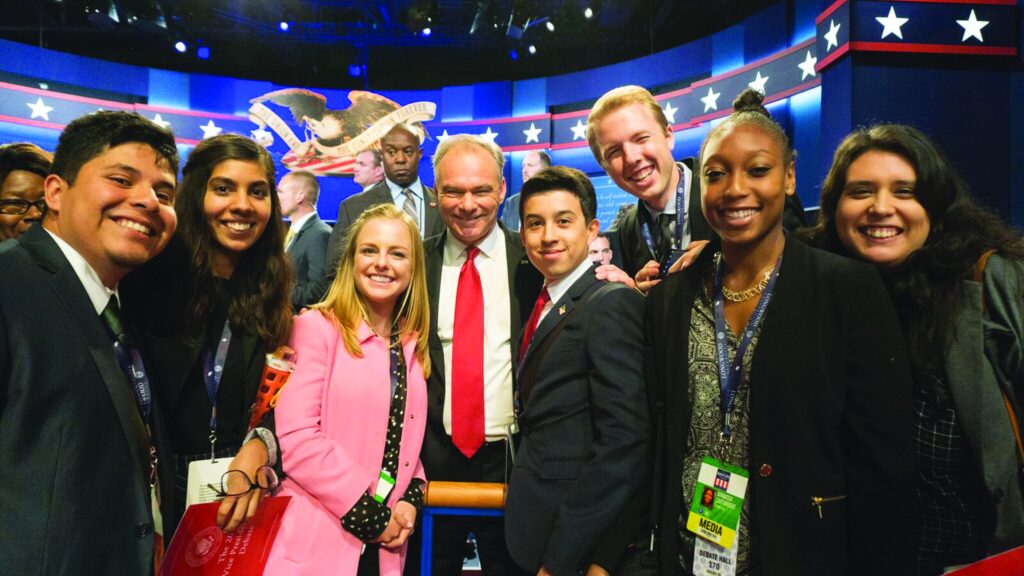 Olivia Hornstein and UCSB alumnus Martin Olvera, participants of the University of California Washington Program (UCDC), secured the seats by winning a contest to guess who the presidential nominees would choose as their running mates. Hornstein guessed one candidate correctly and Olvera correctly guessed both.

“I didn’t think about it too much at first since I’ve been following this election closely for a while now, but I knew both candidates have big egos so they don’t want anyone to overshadow them,” Olvera said.

Indiana Gov. Mike Pence is a safe pick for Trump, Olvera said, because he appeals to the “establishment,” suggesting that Trump is willing to work with the GOP. Olvera said he picked Sen. Tim Kaine because Kaine is from a swing state (Virginia), speaks Spanish and is a former governor with all the qualifications to work in the federal government “if Hillary is incapacitated.”

“Overall, I knew the VP picks had to be people with bland personalities but strong work resumes fit for the executive branch,” he said.

As deliberations ensued between Kaine and Pence on a variety of topics, from foreign policy to gun control and women’s rights, even common campus concerns made their way onto the main stage.

“I think the most salient issue that was discussed has to be the law enforcement and racial tensions that have seized the nation,” Olvera said. He personally knows several people who have had problems with local law enforcement, he said, “such as getting stopped for no reason or singled out because of their appearance.”

Olvera said he found himself in agreement with both Kaine and Pence when it came to the issue of policing.

“Like Senator Kaine said, I do believe there is some form of bias in police when they do their jobs, which targets minorities more,” Martin added. “However, that is not to say that the police are ‘pigs,’ as some extremists on campus would call them. Like Pence said, we shouldn’t be jumping to conclusions that cops are inhuman savages.”

In a generation in which intense issues dominate the media and serve as a central force in influencing both nominees’ policy agendas, programs like UCDC respond by offering students a variety of practical opportunities to become more educated and engaged in current political affairs.

According to UCDC Undergraduate Programs Coordinator Jacob LaViolet, the program holds weekly midnight forums with speakers all over D.C., including Supreme Court justices, to speak with students.

“The program really does a fantastic job at tuning students into what is going on here in D.C., making politics a more realistic concept to grasp versus just an abstract idea,” LaViolet said.

By providing its participants with hands-on experience in conducting research and entering internships in the heart of the nation’s capital, UCDC aims to prepare students for their lives after graduation.

Olvera hopes to continue his path in politics and one day become a Foreign Service Officer with the State Department.