The Daily Nexus
Sports
Gauchos Clean-Sheet Enough to Hold On To 1-0 Win Over UC Irvine
October 8, 2016 at 5:57 am by Ryan Burns 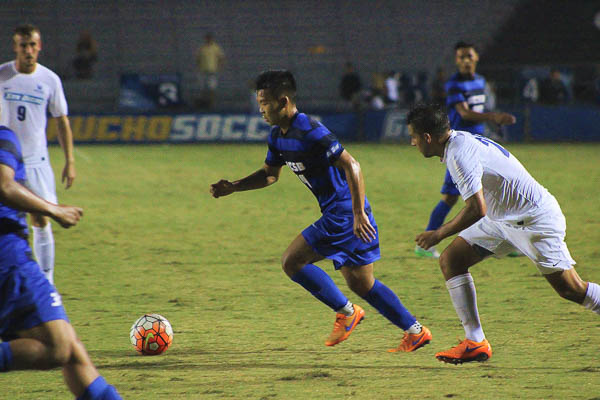 In the first of a three-game home stand, the UCSB men’s soccer team grabbed an early lead through junior winger Ahinga Selemani’s left-footed strike before a second-half red card forced the Gauchos to play a man down for the last 16 minutes. After going a man down, senior striker Nick DePuy moved to center back to tighten things up at the end, and the hosts were able to hold onto their 1-0 shutout to remain undefeated in Big West play.

The game’s only goal came in the tenth minute when senior midfielder Josue España received the ball just inside his own half before dribbling through the UCI defenders toward the edge of the box. When he arrived at the enemy penalty box, the Gauchos’ assist leader switched directions, finding Selemani with a great through ball before the winger slammed his shot low past the goalie to the far post as it tucked in just by the post for his third goal of the year.

España is enjoying some of the best football of his UCSB career right now, assisting in four of the last five games with a Big-West-leading seven helpers on the season. Against Irvine, he and Selemani each created countless chances for themselves and their teammates, the former sending a curling shot inches wide at the end of the first half that could’ve easily been the second goal the Gauchos were looking for.

“It feels good to get back in the groove of things, but for the team, I think it was good to have that 1-0 lead at that point in the game,” Selemani said after breaking his scoring duck.

In the second half, the two teams struggled to create many key chances, but the game took a turn in the 75th minute, when senior midfielder Andy Perez was given a straight red for a cleats-up slide tackle on an Irvine attacker, forcing Santa Barbara to finish a game with a man down for the second time in three conference meetings. Perez will miss the next match.

“We certainly didn’t get any style points for the game tonight, but at this point in the year, what really matters is wins,” Head Coach Tim Vom Steeg said in the post-game presser. “I like that we were able to close out the game even though we were a man down.

The Gaucho defense gave its best showing in weeks, earning its third clean sheet of the season, but the first since Sept. 4. Freshman goalkeeper Titouan Le Roux did his part, making five saves; the best of the lot was in the 39th minute when UCI redshirt junior striker Mario Ortiz found himself in on goal, but Le Roux punched his curling effort out to his left to snuff out the chance.

UCSB’s man of the match, though, was freshman defender Lamar Batista. The 6’5” Oklahoma City native was solid as can be in the back, making every tackle or clearance when called upon and starting several counters with his distribution from the back. He looked perfectly comfortable in his starting role and performed at a top level throughout the contest.

“I think we weathered the storm fairly well,” Selemani said. “We could’ve done better in certain moments, but the keeper came out and made some saves, and that was helpful. They had lots of chances, so it’s good that we could get the win.”

The win was the Gauchos’ second on the trot, and they finally showed the defensive guile that was missing during their five-game slump. With a win against Irvine under their belts, the players will be looking forward to continuing the positive momentum in the next couple league games.
Next up for UCSB is a clash of division leaders as CSUN (2-0-1 BWC) head to Harder Stadium Saturday, Oct. 8, at 7:05. A video stream will be available on the schedule page of the men’s soccer team UCSBgauchos.com website and entrance is free with an ACCESS card. Follow @thenexus_sports for all things Gaucho soccer.