The Daily Nexus
Fine Arts
NAKED SHAKES Do Something With “Nothing”
October 6, 2016 at 12:33 pm by Allison Garfield 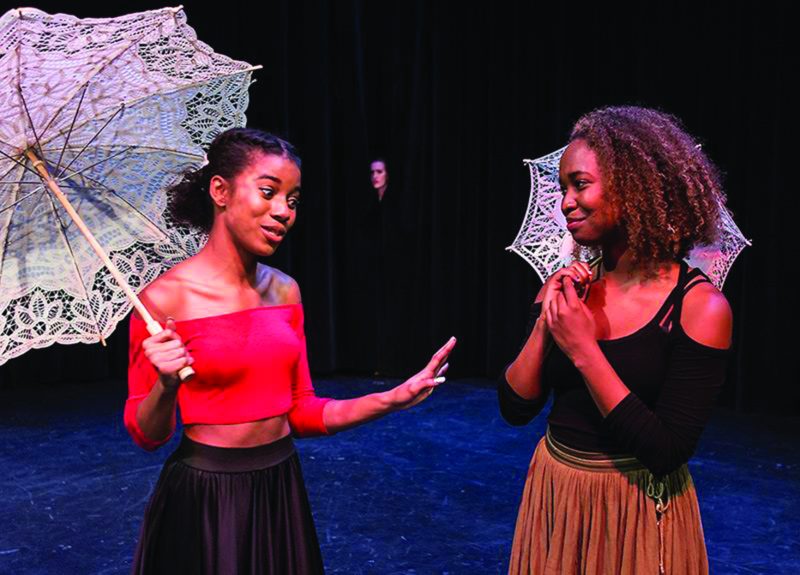 The classic Shakespeare play may have been written centuries ago, but the underlying themes still ring true and hit hard in the NAKED SHAKES production of “Much Ado About Nothing,” directed by Irwin Appel. Opening the season for UCSB’s Theater & Dance, the cast is comprised of students from two summer theater courses and has actors across experience levels. The bottom of the program reads, “Setting: Messina (could be Cuba, could be Argentina, could be Miami, could be LA, could be anywhere…),” and it’s true. The show could have taken place anywhere with its minimalist set and modern costumes. The classic comedy delves into topics such as feminine independence, rumors and deception and the ideals of social grace performed with a modern, contemporary twist. Benedick, portrayed by Zachary Macias, is a quick-witted bachelor looking to woo the independent, feisty Beatrice, played by Maddie Martin. Their amusing banter keeps the pace of the show quick and light, using fanciful language for flirtation by insult. Truly Polite plays the innocent Hero, who desperately longs to be married to Jack Hayes’s Claudio. Their love story grows more and more tragic as the play progresses. The “plain dealing villain” Don John manipulates half of the cast into thinking Hero is unfaithful, causing Claudio to publicly shame her, forcefully at times, at their wedding. Macias’s comedic timing is spectacular, though, and even at the soberest of moments it reminded the audience that they’d get the comedy they came to see. The play boils down to the love story between Beatrice and Benedick who — against their own wills and better judgement — fall in love with each other. It’s the heartbeat of the show, keeping the rhythm fast but vibrant.

“The set is a dance floor” stated director Appel. This is especially true in the show’s opening scene:  a sultry tango dance, perfectly setting the mood for the fiery drama to follow. Audience member of Saturday’s matinee Tara Habibi, first-year economics major, enjoyed the inventiveness of her first production here at UCSB. Appel makes a bold choice using live, original music composed by John Enrico Douglas who also serves as the musical director and pianist for the show (he even has a few lines and interacts with the characters).

“It gave the show a fun vibe,” Habibi said. “The way they chose to intertwine the music, choreography and characters definitely made it special.”

“Much Ado About Nothing” is an undeniably special show. The dialogue is in prose, not iambic pentameter like so many other classics from the bard. This makes it unique from other Shakespeare plays, just like this NAKED SHAKES production of “Much Ado” is unique from others. The bareness of the set emphasizes the acting of the students on stage, leading to many laughs-out-loud from the audience, but along with somber moments of stillness. These moments in particular are when the actors shine brightest and show the true depth of the tale. While the play is a comedy, there is much more to the story than two bickering ex-lovers and their families’ drama. It revolves around one strong, sharp woman who refuses to submit to the will of a husband and accept the social expectations presumed of her, a concept that remains relevant to this day. It’s about what happens when false rumors are aired and the effect that they have on the people regarding them. Sound familiar? These are things we all have dealt with:  standing up for what you believe in, refusing to conform, trying to ignore petty comments overheard in your high school hallway. This production of “Much Ado About Nothing” not only shows that this story can be told from any setting in the world, but also at any point in time, even today.