The Daily Nexus
Opinion
When Rape Culture Rears Its Ugly Head
October 4, 2016 at 5:00 am by Katherine Kepski

I am not usually the type of person who would publicly share a traumatizing incident, but I feel as though my recent experience needs to be heard. It is long and detailed, but extremely important. I originally wrote what I am about to say on Facebook and a lot of people really responded. I feel the original post is the most powerful way to explain what happened and my takeaway, so I edited the post to be more newspaper-appropriate (improving the grammar, taking out cuss words and putting quotations around the alternate word).

I was in my kitchen jamming out to music at 2 a.m. one Friday morning when I heard yelling. When I started to listen to what was being said, I heard a man screaming misogynistic, “appalling” (and I mean REALLY “appalling”) things to a hysterical woman in front of my house. I went outside, walked up to them and told the man to stop verbally assaulting the crying woman. Immediately he began verbally assaulting me, calling me a “lesbian,” among other things.

He defended his words and actions by saying I did not know what the argument was about. I responded that it didn’t matter what they were fighting about because no one deserves to be verbally assaulted. In response he called me an overweight lesbian and accused me of trying to lure the woman to my house so I could sexually assault her. I crouched down to ask her if she was okay, if she needed anything or if she wanted me to take her somewhere. The man continued to berate me while insisting that he was just trying to take her to his friend’s house. 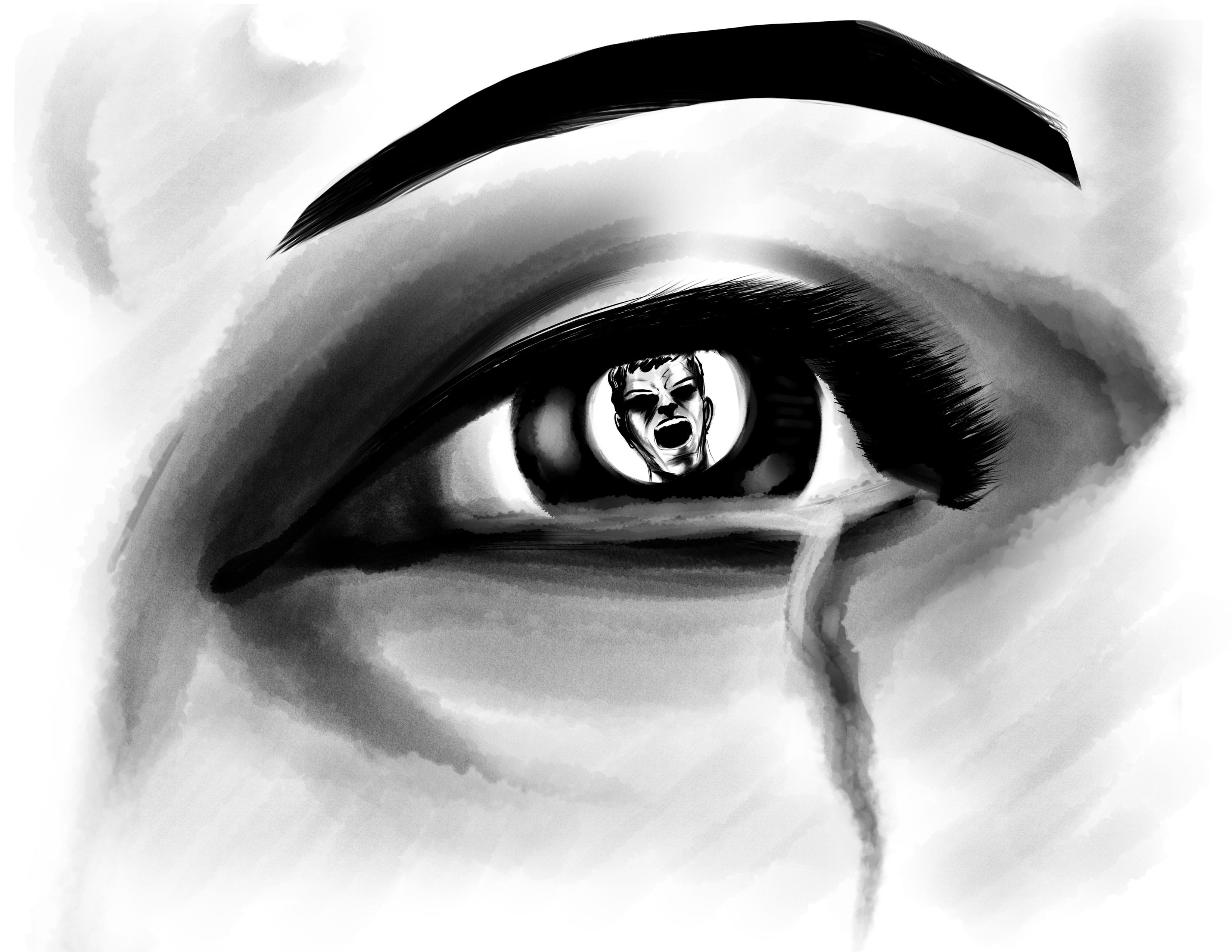 When I asked the woman if she wanted to go with the man she told me, “The sad part is that I do.” He yelled that he was leaving and she shakily told me to get out my phone so I could take down her number, which she gave me along with her name and told me to text her so she could contact me if she needed help.

I let her go because I thought I could not do anything constructive. As they walked away, the man screamed more insults at me. I tried to walk away, but I couldn’t. I ran over to him and yelled back. We were up in each other’s faces. I pushed him. The “brawl” was a blur; I don’t remember much, but I do remember him pushing me down so forcefully my headphones snapped in half and my phone flew to the floor. At this point, his friends on the same street pulled him away from me and had to force him to leave.

He was STILL screaming that I was a “lesbian.” I heard the woman crying so I walked over to her and she grabbed my hand. I put my arm around her and told her we needed to keep her safe and get out of the street. A man and I lifted her up and tried to support her together, but she clutched me and wouldn’t let me go. We moved together — her in my arms — to the house nearby.

While walking, she whispered in my ear that the reason for the fight was that her boyfriend’s best friend had sex with her while she was unconscious. AND HER BOYFRIEND BLAMED HER. While consoling her, a man told me I needed to get off his property. Most of the men on the property agreed. Surrounded by antagonistic, drunk men, I left, yelling at them for as long as I could see them.

Rape culture is everywhere. The culture we live in equates “female” with “submissive,” “weak,” “moody” and “ moronic.”

I walked home, maintaining my composure until I entered my home and attempted to recount the situation to a housemate. All of a sudden, I felt this overwhelming feeling of pain in my chest. I felt like crying, so I left their room and sat in the kitchen, where I initially heard the yelling, and let it out.  I cried for myself, but mostly I cried for her.

It took me a few days to write out this story because every time I tried to I was overwhelmed by anger. I can’t stop thinking about the incident. I know the story is long, but I feel it is important to bring attention to this common behavior as an example of the hyper-masculine, misogynistic, bigoted, truculent and vulgar culture that exists in Isla Vista.

Rape culture is everywhere. The culture we live in equates “female” with “submissive,” “weak,” “moody” and “ moronic.” Consequently, men think women owe them sex, they think “no” means yes and “maybe” means yes and women cannot change their minds about having sex with them. They sexualize, objectify, assault, rape, abuse and blame women.

You know why rape happens so often in Isla Vista? It is our mentality and our culture. Nothing will change if we do not try to affect a change.

This mentality normalizes violence against women to the extent they have become afraid to take action against their assailants. You want to know the truth about being a woman? It is hard to find a woman who has not experienced a man objectifying her, demeaning her, catcalling her, grabbing her ass, harassing her … And you know what? I am tired of it.

More police, better lighting and whatever else you want to say will reduce sexual assaults can only go so far. You know why rape happens so often in Isla Vista? It is our mentality and our culture. Nothing will change if we do not try to affect a change. I, for one, am fed up. After this experience of direct action, I do not want to stop. I want to begin with letting my neighbor know I am not the only one who thinks he is disgusting. No one from the house has confronted me or anyone in my house, but I want to confront them.

However, I am one woman. I can only do so much against the hyper-masculine, patriarchal society we live in. Together, though, we are powerful enough to IMPACT this system. I am asking you to help me make Isla Vista a safer place for me, for the woman, for all women and for everyone who finds themselves at risk in this system. Join me in the fight. Let us work together to dismantle the tendency toward rape culture in Isla Vista.

I working with a collective of Feminasty Guardians to protest rape culture. On Friday, Oct. 14 at 9 p.m., myself, my friends and those who wish to stand with us in our fight against this patriarchal institution will march. We will start at the corner of Pardall and Embarcadero Del Mar, march through the loop to Del Playa and end at the beginning of the 67 block of Sabado Tarde (where the incident happened). We need to end this silence. This begins now.

Kat Kepski wants to make enough noise to shine a light on this uncomfortable topic.

so you attacked someone on the street. cool, no one cares except maybe the police. the last half of your article isn’t relevant to the first half. maybe you should embrace the so called “masculine” and use a little bit more logic, this hysterical non-sequitur is pretty pathetic.

to reiterate: you’re the one in the wrong here, you literally assaulted someone unprovoked. that’s indisputable per your own account of the story, and I bet you exaggerated/lied as well

From the way you framed it, it sounds as if you started a violent altercation because someone was yelling mean things. That’s not something I would want to publicly flaunt in an article. To combat “rape culture” (or whatever you want to call it) we should be interpreting rape statistics and encouraging women to go to the police when they’ve been raped (read: sexually assaulted). We need to educate men on what sexual assault is and how exactly to not do it, as well as educating women on how to file crime reports and tell the signs of a sexually… Read more »

We are all entitled to our opinions, but those actually brave enough to attach a name to their remarks- ‘Anonymous’ just doesn’t bear any weight- merit consideration. Last time I checked the Spanish Inquisition and prurience lawsuits were a thing of the past. Pen names are obsolete. Kind of like the tolerance of domestic violence should be.

Wait, so you’re saying that if someone says something anonymously the thing they say doesn’t have any merit? Instead of evaluating the message, you’re evaluating the speaker? Hmm, I wonder if policing agencies should stop accepting “anonymous tips”? Pen names are obsolete? I guess I missed the memo.

Try to respond to things you disagree with with logic rather than something extraneous. You’re saying domestic violence shouldn’t be tolerated, yet her violence can be overlooked because she was “brave”. Come on now.

“But men are not punished for their behavior because being a man means you are going to be aggressive, horny, dominant, strong and intelligent. Society has planted this idea into women’s heads that if they are sexually assaulted, they are the ones who “messed” up; they are the sluts, they are the ones who provoked men with their flirty behavior, they are the ones who were asking for it because they were wearing a short skirt.” The “short skirt” thing is a myth. There is a total lack of evidence that this trope is actually a wide-spread belief, or that… Read more »

Katherine Kepsy, I call bullshit. I have never met a single man in his right mind who, after hearing that his BEST FRIEND had RAPED his GIRLFRIEND while she was UNCONSCIOUS would ever react the way you described in this piece. This is such a blatant lie that I’m honestly astonished that you thought regular, rational people would take it seriously. If you really cared about rape culture / holding men accountable as much as you enjoy pretending that you do, you would make a report! You have the girl’s name + phone number , you could pretty easily ID… Read more »

Rape culture is a mythical feminist construct. It has no place in a rational discussion about preventing sexual assault.

I don’t think she needs any extra fuel

I tried to leave a comment on the Facebook event page for the march, but I saw that you set posts to approval only because feminists don’t believe in free speech or hearing dissenting opinions.

You say that “men are not punished for their behavior.” What kind of alternate fantasy universe do you live in where rape is legal and socially accepted? And when will you speak out against the rampant Title IX abuse denying accused individuals their basic due process rights in universities across the country?

“In the last few years, there has been an unfortunate trend towards blaming “rape culture” for the extensive problem of sexual violence on campuses. While it is helpful to point out the systemic barriers to addressing the problem, it is important to not lose sight of a simple fact: Rape is caused not by cultural factors but by the conscious decisions, of a small percentage of the community, to commit a violent crime.” -RAINN (the Rape, Abuse, and Incest National Network)

The author is a loon, just ignore this garbage

What a sad little snowflake you are. This story sounds like a fabrication or an exaggeration at best.

We hold people accountable for their actions while drunk in other areas of life. Party girls don’t get a pass, sorry sweetheart.