The Daily Nexus
Previews: What's Going On
Legendary: The Who to Hit Santa Barbara Bowl
October 3, 2016 at 2:47 pm by Benjamin Miller 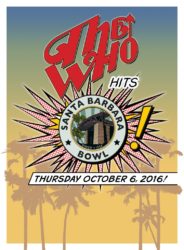 While recorded music may live until the end of time, the legends that create some of the world’s most iconic anthems all eventually reach a point where a live performance is no longer possible. Perhaps that is what makes The Who at Santa Barbara Bowl such a special concert. The 51-year old English rock band comes to town Thursday night as a leg of what could very well be its final performance exhibition, titled, “Back to the Who Tour 51!”

Any musical act that rocked the stage at Woodstock in 1969 is certainly worth witnessing live. A quick Google search of The Who’s “related artists” reveals a star-studded array, including The Beatles, Led Zeppelin, Jimmy Hendrix, and just about any other 20th century powerhouse that will send your mom and dad’s nostalgia to the moon and back. With more than 100 million records sold worldwide, and hundreds of tribute bands attempting impersonations, The Who’s influence is undeniable.

Thursday night’s show will feature two of the original four members of the band, Roger Daltrey and Pete Townshend. This is as authentic as a Who show can possibly get in 2016, as past members Keith Moon and John Entwistle are no longer living. As a lead singer, Daltrey has developed a famed reputation as one of rock’s most charismatic figures. Townshend has been cited as the driving force behind the songwriting successes of The Who, and is revered by other guitar gods such as Johnny Marr of The Smiths, who calls Townshend “the best of the ’60s guitar players by miles.” Both his master guitar playing and supporting vocals will be on display as he accompanies Daltrey’s frontman duties.

Some of The Who’s greatest hits include, “Won’t Get Fooled Again,” “My Generation” and “Baba O’Riley.” The first few bars of each of these songs will instantly send shockwaves of familiarity through your brain. Whether or not you recognize this music as The Who, you’ve undoubtedly heard at least one song from their repository of classics.

In its prime, The Who’s influence was felt beyond music. The group’s adoption of the 1960s Modernism (“Mod”) aesthetic promoted London-based styles that infiltrated cultures around the world. The band also found itself at the epicenter of counter-culture influenced performance art, destroying instruments on stage in dramatic, theatrical fashion. The sheer possibility of a 71-year old Pete Townshend smashing a guitar against the Santa Barbara Bowl stage should be enough incentive for anyone to attend this show.

So, whether or not you find yourself listening to The Who edition of “20th Century Masters: Greatest Hits,” the band’s mere presence in our city is worthy of note. With 50 plus years of experience under their belts, Daltrey and Townshend are sure to deliver a concert that will take a place in your memory for good.