The Daily Nexus
Student Gov
Remaining Senators Sworn In at First Senate
September 29, 2016 at 12:33 am by Josh Ortiz and Annie Golay 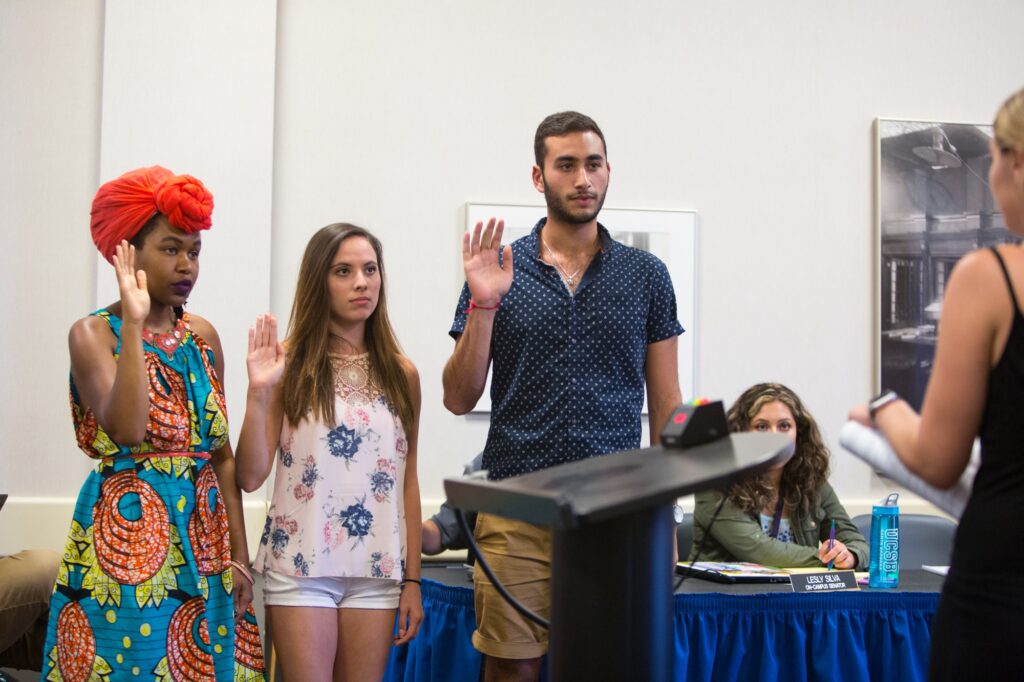 Associated Students Senators began their time in office at the first Senate of the year on Wednesday after a delayed start for the new government in spring 2016.

The last three of 25 Associated Students (A.S.) senators were sworn into office Wednesday, finalizing the approval of the A.S. Senate for the 2016-2017 academic year.

Typically, new Senators sit in for their first meeting at the end of Spring Quarter, but such action was delayed by bribery allegations against the Interfraternity Council (IFC) in the 2016 spring election.

After A.S. Elections Board called for a revote, accusing the IFC of bribing its members to vote for specific candidates, the UCSB Audit and Advisory Department launched an investigation into the allegations. Then-A.S. President Jimmy Villarreal formed the Villarreal Elections Commission to process the Audit and Advisory Department’s findings while Senate was out-of-session in the summer.

The investigation came to a close in May, finding no evidence of wrongdoing by the IFC. Twenty-two of the 25 newly elected senators were then sworn-in throughout the summer.

Unable to be sworn in with the rest of the Senate during summer, Unique Vance, Sabrina Divin and Aaron Hendizadeh made their pledges and officially took on their elected positions last night instead.

With all its members finally approved, A.S. Senate ratified the decision of the Villarreal Elections Commission, which approved the findings of the Audit and Advisory Department’s investigation in May. Seventeen senators approved this motion, seven abstained from voting and one senator remains absent while studying abroad in Great Britain for the Fall Quarter.

The approved mission statement names the functions of the A.S. Senate to “represent and advocate for the undergraduate student body” and “strive to effectively address their concerns.” It also enumerates that Senate will “enhance student life” and “improve campus climate” while “remaining conscious” of the UCSB community, the environment and the University of California system.

A version of this story appeared on p.1 of the Thursday, September 29, 2016 print edition of the Daily Nexus.