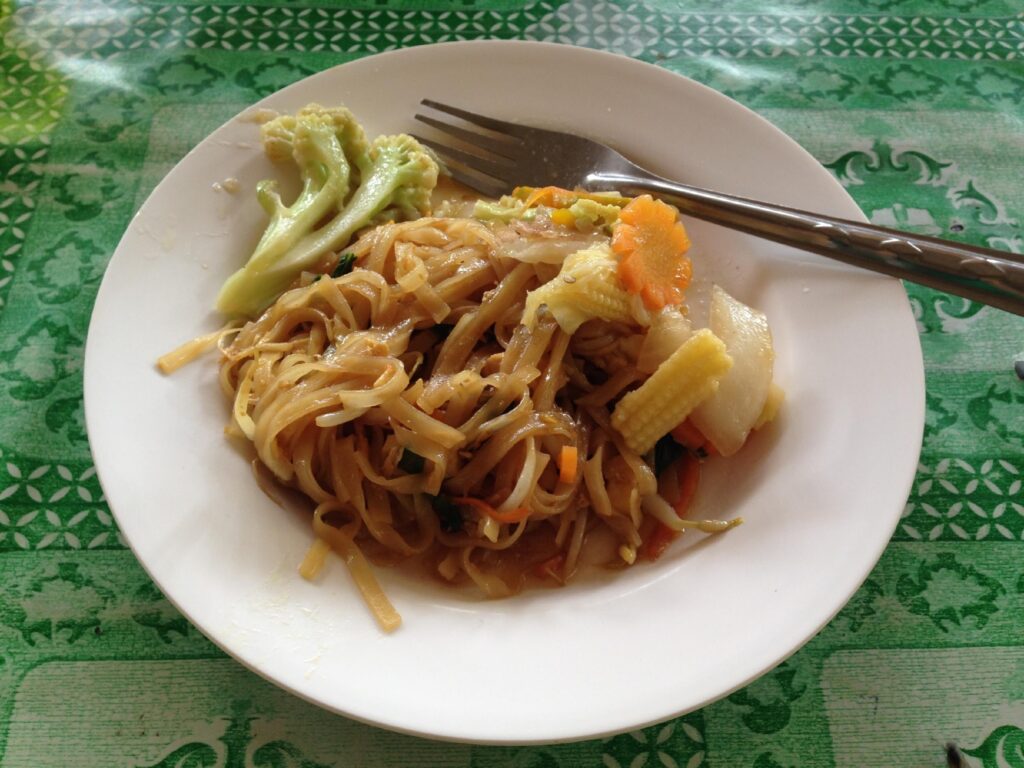 Recently, I had the opportunity to travel to Thailand to do volunteer work. I was ecstatic to not only be able to help others but to also to experience a new place and culture. This, of course, included getting a taste of its foods. I quickly learned that some of the main food staples in Thailand are rice, vegetables and noodles, with a variety of different spices and flavors. I’m not usually adventurous when it comes to trying new foods, but I really wanted to take advantage of being in a different country with new foods that were typical of a culture different from mine. Throughout my time in Thailand, I was lucky enough to have countless opportunities to explore and taste street food in the city, take part in a Thai cooking lesson and go out to eat at a few little restaurants.

I spent the first and last days of my trip in the city of Chiang Mai. Walking along the streets of the city at night, there were tons of food stands lined up offering a vast menu of classic Thai dishes. You could smell the spices in the air and hear the food sizzling as well as see the food being cooked right in front of you. My fellow volunteers and I decided on a place to eat that was recommended to us. It was a little food stand on the side of the road with seating off to the side. We took a seat where there were menus on the table and looked over the long list of choices. I made a safe choice my first night and ordered the chicken fried rice. Other people were a little more adventurous than I was and tried out the curry, pad Thai or some of the other traditional Thai dishes. Many of the dishes were a combination of noodles and chicken or some other kind of meat. I was excited when my food came and couldn’t wait to dig in. It came out steaming hot and looking delicious. It was a great choice for me because it was a more familiar kind of dish, but I still got to taste something that was typical in Thailand. The dish included chicken, rice and vegetables. The rice and chicken mixed well with the crunch of the vegetables mixed in, and I, of course, added some soy sauce for some extra flavor.

While staying in a hill tribe village, we had the opportunity to take part in a Thai cooking lesson. Some women from the local village came to our accommodations to teach us how to make a couple dishes including a sticky rice dessert, papaya salad and eggplant dish. In Thailand, they make some great desserts with sticky rice, including their famous mango sticky rice which I was constantly told is amazing. We were shown how to make a banana sticky rice dessert. We were given rice, bananas and these large leaves. They showed us how to fold the leaves correctly so that they made a little pocket, then told us to stuff the leaf pocket with the rice and then place a little peeled banana in each one. Once we had a bunch put together, the local women cooked them for us. When I tasted them later, they weren’t exactly what I was expecting. It was very sweet and soft, but not my favorite thing I had there.

One night, we were taken to a little restaurant close to our accommodations. It was a cute outdoor place in the jungle and offered good food and drinks. We were served a cashew chicken dish with rice and vegetables, a shrimp soup and watermelon. The cashew chicken was really good, flavorful and saucy. I’m not a huge fan of cashews, but the vegetables complemented the chicken, infused with the flavors from the sauce. The soup was super spicy, which I wasn’t expecting. It wasn’t really for me, so I stuck to the watermelon which was nice and refreshing.

I had never had pad Thai before coming to Thailand. Even when I was in the city the first night, I wasn’t brave enough to try it. However, it is one of Thailand’s classic dishes and is extremely popular even in America, so I knew I had to try it at some point while I was there. On one of our last few days on our way back to the city, we stopped at a local hotel-type place where we were served pad Thai. I really didn’t know what to expect. I had heard of the dish but never really knew what exactly was in it or what it tasted like. I was pleasantly surprised. It was very sweet, which I think was the most unexpected part for me. The noodles were rich in flavor and were served with sweet corn, broccoli and carrots. I went back for se