The Daily Nexus
Volleyball
Gauchos Set for Conference Opener
September 22, 2016 at 5:02 am by Liam Bailey

Prior to being shut out by the University of San Diego in its last match, the UCSB women’s volleyball team had won four of its last five games. After a mid-week practice leading up to Friday’s Big West Conference opening match vs No. 14 Hawaii, Head Coach Nicole Lantagne Welch was optimistic while explaining what had impressed her most throughout the team’s first few weeks of non-conference play.

“We have a lot of potential. We can play at a very, very high level,” Lantagne Welch said. 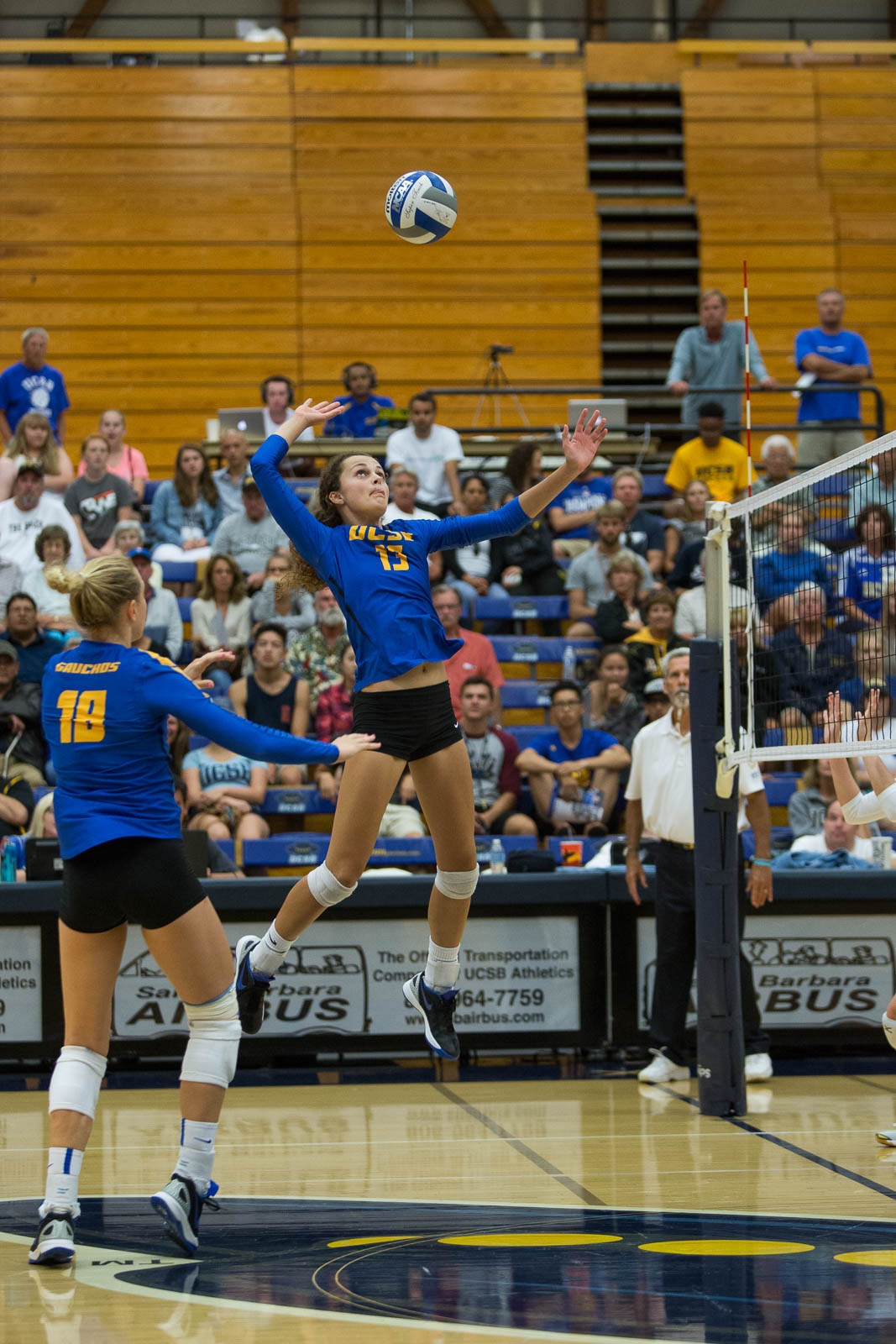 Nonetheless, this team has certainly proven that to be true early in the 2016 campaign, as a thirteen-game non-conference schedule saw the Gauchos finish with a Big West best 9-4 overall record.

UCSB played in four tournaments, finishing with a winning record in three of them and swept six of its opponents.

UCSB’s offense has been spearheaded by its outside hitters, led by redshirt freshman Lindsey Ruddins and junior Chanel Hoffman. Ruddins has picked up Big West Freshman of the Week honors for three consecutive weeks after earning three straight all-tournament team honors and leads the team with 196 kills at an average of 4.45 kills per set.

Hoffman boasts the second most kills on the team with 137, providing the Gauchos with a dominant one-two punch on the outside that opponents have struggle to answer against.

Senior middle blocker Phoebe Grunt seems to be on her way to an All-Big West team after earning an Honorable Mention the past two years. She is averaging a team-high .95 blocks per set, providing the Gauchos with a force in the middle that has been essential to their early season success.

“Phoebe has been the most consistent for us,” Lantagne Welch explained before noting her .410 hitting percentage during the non-conference schedule to lead all Big West players. For her fourth straight season, she’s providing UCSB with excellent all-around play, and, with this young team, her leadership has never been more vital.

The UCSB defense has been propped up by sophomore defensive specialist Emilia Petrachi who is one of two Big West players to amass over 200 digs in non-conference play. She’s been seemingly everywhere on the court, and the Gauchos will be relying on her prowess when facing the talent within the Big West.

Hawaii will be on the road for the first time this season as it played all 11 of its non-conference matches at home in the Stan Sheriff Center.

With a 7-4 record, the Rainbow Wahine are 14th in the national Division I rankings and will be one of the toughest teams the Gauchos have faced so far.

After missing the first three matches of the season, senior outside hitter and last year’s Big West Player of the Year Nikki Taylor leads the Big West with 5.41 kills per set, almost a full kill more than Ruddins, who holds second place by a sizable margin.

Junior libero and defensive specialist Savanah Kahakai is third in the Big West with 4.40 digs per set, only slightly behind Petrachi, and she’s sure to make things difficult for the Gaucho offense throughout the match.

Junior middle hitter Emily Maglio will only make matters more difficult for UCSB as her 1.25 blocks per set rank second in the conference, not to mention her jarring .390 hitting percentage.

“The big thing is, if we take care of our side and [ride] out at a really high percentage, we’re going to be in a good situation,” Lantagne Welch said.

Thus far, it has been an exciting season for the Gauchos who have showed that youth doesn’t always need time to mature before success. A visit from the 2015 Big West champions will provide a true test for the young squad who finished a modest 3-13 in conference play last season.

The Gauchos certainly think they belong, however, and Lantagne Welch is fully committed to ensuring that she and her team believe they are capable.

“We do have some goals; we want to go after this Big West championship,” Lantagne Welch said. “[Most importantly], focusing on what we can do this day and focus[ing] on our next match.”

UCSB and Hawaii will face off on Friday, Sept. 23 at 7 p.m. in the Thunderdome.

A version of this article appeared on page 7 of September 22, 2016’s print edition of the Daily Nexus.