The Daily Nexus
Fine Arts
Coming Soon to a Campus Near You
September 22, 2016 at 5:00 am by Artsweek Editor 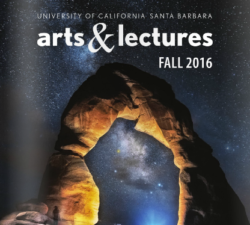 As the school year comes back into its swing and new and returning students adjust their tunes into the stream of campus life, it can be altogether too easy to lose track of the fantastically stimulating resources the university offers. UCSB Arts & Lectures have a track record for bringing compelling presentations to the school and its sphere to enrich both students and the community, and their lineup for the Fall 2016 season has a gem for every ear and eye.

In celebration of their centennial anniversary, the Granada Theatre downtown will host a free screening of six-part docuseries “The National Parks: America’s Best Idea” this Saturday and Sunday the 24 and 25. The series delves into the complicated history of the parks’ development from the 1850s on and elucidates the case for conservation of the nation’s treasured resources and landscapes. As a supplement, series writer and producer Dayton Duncan comes to Campbell Hall on Nov. 15 to speak on how the National Park idea and project has developed; Duncan is just one of many speakers visiting this season in the National Parks series.

Other programs on the lineup celebrating the wonders of natural spaces include a flight of short films by Telluride Mountainfilm on Oct. 20, and a pair of National Geographic Live events, where wildlife filmmaker Bob Poole will demonstrate his conservationist work in Mozambique (Oct. 30) and photojournalist Brian Skerry his own in the world’s oceans (Nov. 20). All take place right here in Campbell Hall.

Samples from A&L’s impressive slate of musical acts include performances by soul saxophonist Maceo Parker, known for his work with legends like James Brown, Parliament-Funkadelic and Prince, on Oct. 27 at Campbell. Sonically flexible songsmith Neko Case will also bring her stuff to Campbell, on Nov. 18.

On the folkier side, renowned singer, songwriter and social activist Joan Baez will grace the Arlington on Nov. 3. Aside from her impressive body of work, Baez’s message warrants attendance; her activism has made her friend of the likes of Martin Luther King Jr. For those who like their folk more contemporary, Iron & Wine will be plucking away solo this Sunday the 25 at Campbell Hall.

The Word of Mouth series highlights a spread of distinguished speakers covering a range of poignant and consequential topics for an informed citizenry. Lauded political advisor and analyst Fareed Zakaria will apply national and global perspectives on this year’s inflatedly consequential presidential election on Sept. 27 at the Granada. On Nov. 14, Captain Scott Kelly, a NASA Astronaut and the first American to spend an entire year in space, will bring his unique perspective to his speaking event at the same theater.

A&L this season features dance performances for both bunheads and sneakerheads. On Oct. 8, the Alonzo King LINES Ballet company pushes the envelope of the intricate genre and brings it spinning into the skies of the Granada with aerial techniques. On the 25, Lil Buck, a Memphis disciple of the city’s interdisciplinary jookin’ dance style, brings his footwork to the same stage. Having worked with titans like Yo-Yo Ma and Madonna, Buck promises to impress with his genre-melting flurry of hip-hop, jazz, ballet and modern.

Comedy fans, i.e., people, will be glad to chuckle at “Whose Live Anyway?,” the live and on-the-road version of beloved improv show “Whose Line.” Show-goers can count on shouting suggestions at series regulars Greg Proops and Ryan Stiles on Nov. 9, and might even get to join them on the Granada stage. Comedy podcast king Marc Maron of “WTF” fame will bring his darkly honest humor to a stand-up set at Campbell Hall on Oct. 21.

Virtually all of these events are ticketed at a discounted price of $10-$15 for students, but for many of us that indulgence can be denting. A&L’s free events this season include the aforementioned screenings of the National Parks docuseries, and a presentation at Campbell from photographer Q.T. Luong showcasing his stunning work capturing these protected lands on Nov. 2. Free screenings include “Sonita,” the story of a Tehran teen with aspirations to be the next Rihanna (Nov. 30 at Campbell), and “Screenagers,” a doc exploring the psychology of excessive tech time on the developing brain (Oct. 16, Arlington). A&L will also host speakers like author Larissa MacFarquhar (Oct. 5), artists Françoise Mouly and Anita Kunz (Oct. 17), and Father Gregory Boyle (Oct. 18), all at Campbell Hall.

Beyond fall quarter, the year’s lineup include the likes of outspoken leader in feminist thought and action Gloria Steinem, cello virtuoso Yo-Yo Ma, and Alton Brown speaking about food science. Find tickets to all these events and more on their website, artsandlectures.sa.ucsb.edu, and learn yourself a thing or two.