The chase for a program-best 12-0 start was cut short for the UCSB women’s soccer team as it endured its first loss of the season 2-1 at Texas on Sunday. The loss ended the Gauchos’ eight-match winning streak and lands them at 8-1-0. Texas improved to 6-3-0 and is currently on a three-match winning streak. 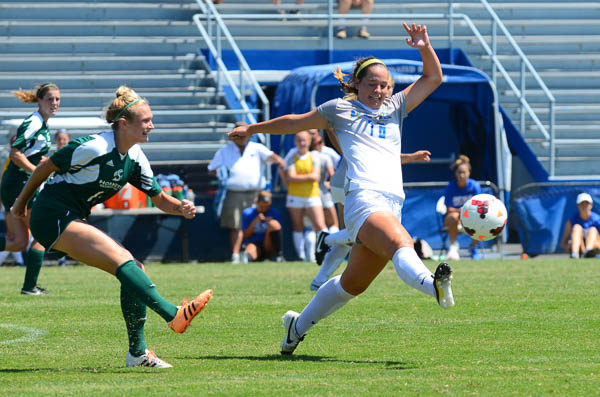 Although UCSB’s sophomore goalkeeper Brittney Rogers sits atop the Big West rankings in save percentage (.880), goals against (3) and goals-against average (0.39), the one goal she allowed in the first half of Sunday’s matchup to give the Longhorns a 1-0 lead was costly Texas’ upset over UCSB.

Providing the early lead was the Longhorns’ freshman forward Cyera Hintzen scoring her first career goal at the 9:38 mark of the match. Receiving a deflected ball after attempting to make a pass to a teammate ahead, Hintzen sent a strike from about 25 yards out that managed to enter the net sailing right over Rogers’ hands.

Despite no other goal being scored in the first half, both teams continued to test each other’s defense as the end of the first half concluded with eight shots for UCSB and nine for Texas. In total, UCSB finished with 13 shots while the Longhorns finished with 14. Both programs remained persistent with their shot attempts in the second half as well with a total of five apiece.

After allowing an early goal in the first half, UCSB responded with a quick goal of its own just 1:53 into the second half. Putting UCSB on the scoreboard was none other than junior forward Amanda Ball. Ranking second in the Big West in goals with eight, Ball was able to score off of an assisted pass from sophomore midfielder Sydney Magnin.

Initially setting up the play was freshman forward/midfielder Shaelan Murison passing the ball to Magnin on a cross into the 18-yard box who then passed it to Ball for the shot on goal and score to tie the Longhorns 1-1.

The stalemate nearly lasted for 20 minutes but was ended with a goal by Texas. Leading the charge in a 1 vs. 3 situation was freshman forward Tecora Turner for her first career goal.

Despite playing just 21 minutes as a sub off the bench, Turner managed to score the game-winning goal off an assist from sophomore forward Alexa Adams in the 64th minute. Her late game heroics can be accredited for her earning the Big 12 Freshman of the Week award on Monday.

Recording a total of seven corner kicks on Sunday, two in the second half, UCSB was unable to capitalize on any of its opportunities to possibly send Sunday’s match into overtime.

Two road matches remain on UCSB’s schedule before it begins its Big West Conference schedule. Despite being 8-1 overall, the Gauchos must not overlook their final two non-conference matches in order to sustain momentum heading into conference play as Big West counterparts Hawaii (7-1) and UC Irvine (8-2) seem like they  will be strong contenders for the league title as well.

Santa Barbara’s final two non-conference matches will take place at Pacific LMU on Thursday, Sept 22 at 5 p.m. and at LMU on Sunday, Sept. 25 at 1 p.m.