The Daily Nexus
Sign of the Times
Want to Change the World? Stop Flipping the Channel
September 9, 2016 at 5:00 am by Nik Frey

When we turn on the TV and hear about the terrible suffering of people halfway across the world, it’s very tempting for us to flip the channel. It’s not that we don’t care about them or that we are unaware of the horrible things happening in the world;  we just naturally dwell on happier thoughts. We say things like “Well that’s just how it is” and convince ourselves that “I couldn’t even do anything about it if I could.”

We make excuses for our apathy. As one of my role models says best, excuse-making “shields us from pain, saves our pride and allows us to obscure the brutal truth.” However, when it comes to ignoring the plight of the innocent in modern war zones, the pain we avoid with our excuse-making only accentuates the pain of their oppressed and gives evil the foothold it needs to thrive. Turning off the news channel obviously doesn’t make the issues go away; it’s our lack of desire to respond that allows evil people to commit terrible atrocities in conflict regions without resistance. 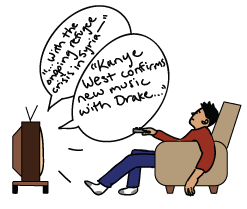 In the absence of an outside force to defend the oppressed, that status quo remains the same and injustice thrives. If nobody reports sex trafficking in Spanish nightclubs, the cycle continues. If the American public did not mobilize in favor of contributing military aid to the U.N.’s 1993 peacekeeping mission in Somalia, even more Somali civilians would have starved to death. If nobody diverts the world’s attention away from Colin Kaepernick’s publicity stunt or deceased zoo gorillas and instead toward to the atrocities currently underway in South Sudan, real people are going to keep on dying. It’s as simple as that.

I think it’s time we got seriously pissed off about the fact that “global forced displacement has hit an all-time high.” We need to stop flipping the channel and replace our apathy with anger. As Gandhi famously said, “Anger is like electricity. When channeled in the right direction, it can be used to light the world.” Build that anger, let it fester and direct it positively.

So why should we care about issues in countries that most of us know virtually nothing about? Why should I be pushing this unrealistic level of social responsibility onto others. Because whether we accept it or not, the world is getting smaller. As the international system becomes more and more globalized, the “little” problems facing brand new countries like South Sudan can create enormous consequences for the rest of the world — starting with America’s regional “allies” like Uganda and Kenya that share borders with South Sudan.

We don’t need to play the role of “world police” or “world doctor,” but we can at least contribute something toward making the world a better place.

This is not to say that we must intervene in unstable nations only if our national interests are at stake; my argument is quite the opposite! My point is that even if we ditch moral responsibility as a reason for humanitarian intervention, we are reaching a unique point in history where it is still in our best practical interest to serve the oppressed. We don’t need to play the role of “world police” or “world doctor,” but we can at least contribute something toward making the world a better place. At the very least, we can give a shit.

It’s not my goal to shame others into becoming international justice activists. However, I do believe there several things that we can do as young adults to serve the oppressed in the world’s darkest corners. If you have any desire to serve communities being broken by international conflict, then I challenge you to start searching for internships, research grants, refugee work and similar options to serve the thousands of people being displaced from their homes in war zones almost every day.

You don’t need to hop on a plane to Syria or send thousands of dollars to Red Cross, but if you really want to learn more about life on the frontlines of conflict, there are several avenues for you to do so. You can also do some research into non-governmental organizations (NGOs) working in conflict areas.

Every NGO has some sort of mission statement that explains exactly what they do; you can find this on their website. Once you find one that you like, you can explore the possibility of spending a very small portion of your income to their cause. Small donations can go a long way, especially in countries where the U.S. dollar holds a better exchange value.

If you are strapped on cash like I am, you can also organize a fundraiser yourself to raise support for the NGO of your choice. Some of my best memories are actually from “FUNdraising” with my friends in Isla Vista. One of the most-enjoyable fundraisers we did was a quarterly event called “The Battle of Dogshit Park,” in which several costume-clad college students made padded Medieval weapons and beat the snot out of each other in the name of charity work.

Never doubt your ability to make a difference in someone’s life … it may just take some commitment and time on your part!

We’ve also did ridiculous Christmas caroling — where we change the words of popular holiday songs to fit Isla Vista culture — to raise support for various outreaches. One of my buddies started a GoFundMe fundraiser for the Lymphoma Society when he set out to run his first marathon — he raised way more money than his intended goal and knocked out a personal achievement at the same time!

My point is that it’s super easy and fun to launch a fundraiser with friends in Isla Vista and there are plenty of enjoyable ways to do them, whether you are part of a big organization like Greek life or not. Never doubt your ability to make a difference in someone’s life … it may just take some commitment and time on your part!

You don’t have to throw cash at a reliable NGO either to impact victims from war zones. Simply being educated on the various issues plaguing countries that are experiencing violent conflict — and there are many — is the first step to any positive change in these places. For example, the more that people in western nations began to do research on the Syrian refugee crisis, western governments consequently began to empathize with the Syrian point of view and provide much-needed relief aid.

Furthermore, you can educate yourself best by travelling to countries near the place of conflict (although I would not advocate travelling to the conflict region itself, unless you are experienced in the area or have security). When I travelled to South Africa (not a war-torn country) I was still able to learn multitudes about violent revolutions occurring throughout the entire continent. There is just something special about physically being in countries that makes you learn.

The media often casts images of the suffering in refugee camps, but what it often doesn’t show is the incredible strength and fortitude these people have; go and see for yourself.

If you are up to it, you can even volunteer at a refugee camp. This probably applies best to people with medical skills, although people of various backgrounds travel thousands of miles to serve. I have several friends who have done this in places affected by both war or natural disasters — from Uganda to Nepal — and all of them have described it as the “most valuable experience they’ve ever had.” This isn’t necessarily because refugee camps are resided by people in terrible suffering; rather, the strength of people becomes even more apparent.

My friend told me that what struck him most significantly during his time working in a refugee camp involved watching a family — a family who had lost literally everything they own after being displaced — laugh hysterically and play games together. Volunteering in a refugee camp with an NGO might be a big move, but if you’re ready for it, it could very well change your perspective toward refugees. The media often casts images of the suffering in refugee camps, but what it often doesn’t show is the incredible strength and fortitude these people have; go and see for yourself. Just be ready to get your hands dirty and serve.

Another great way for you to promote social justice in conflict regions is to write your political representatives and to vote for people who understand the problems affecting civilians living in conflict areas. As Americans, we must not take for granted the opportunities presented to us and the valuable freedom of speech that we have — so take advantage of your rights!

Social media is also an excellent modern invention that impacts the world; you can easily use it to spread awareness of issues, to launch your own fundraisers or to speak out against politicians who advocate for the deliberate targeting of civilians in warfare.

I hope that I haven’t insulted your intelligence by creating an entire to-do list, but I also encourage you to consider the multitude of options you have for effecting justice and positive change in the world. It’s easy for us to make excuses for our apathy and lack of response to tragedies affecting people half the world away … I am challenging you to rise above the status quo. As Mohammad Ali once said, “Service to others is the rent we pay for our place here on Earth.”

Nik Frey urges that if you share this mentality and are angered by the injustices that happen around our world every day, then stop making excuses, get your hands dirty and join the fight!

What if you honestly and genuinely don’t give a f@&k about any of these things you are mentioning? What do you advise someone to do at that point?