The Daily Nexus
Sports
UCSB Dominates Pittsburgh, Looking to Stay Hot Against Utah State
September 4, 2016 at 3:16 am by Antonia Bird

The UC Santa Barbara Gauchos women’s soccer team is developing quite a legacy for themselves as they continue to break records. After Friday evening’s match against the Pittsburgh Panthers, when the Gauchos blanked the Panthers 4-0, UCSB improved to 4-0, their best season start since 1993 when they started 5-0. With the way UCSB is looking now, surpassing a 5-0 start seems far from impossible.

The Gauchos went into Friday’s matchup unsure of their opponent’s strengths, as the two teams had never faced off before. Although the Panther lineup posed several intimidating threats to the Gaucho defense, UCSB took advantage of the pressure and executed a perfect game.

UCSB saw positive playing time from a handful of players. Junior midfielder Chace Shornstein was the flame that sparked the four-goal run. Within the first minute, sophomore midfielder Mallory Hromatko delivered a well-placed soaring cross, which Shornstein converted into an easy header into the back of the net. The early cushion increased the overall confidence of the Gaucho offense, and they would use that confidence to shut the Panthers down. 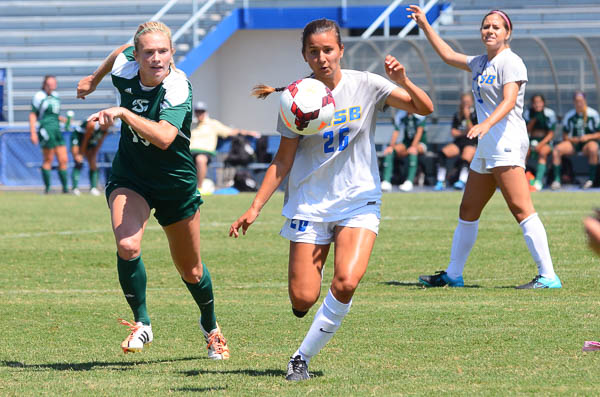 Dominating the first half and controlling the flow of the game was key for the Gauchos in establishing an early lead. In the 18th minute, Hromatko scored a goal of her own. Hromatko’s ability to transition from defense to offense was at the essence of her breakaway goal.

When working hard to contain a Panther defender in Panther territory, Hromatko read the footwork of her opponent well and stole the ball, allowing her to make an effort towards the goal. Once at the goal, Hromatko took a chance and placed a perfect shot to the right side of the net, which put the Gauchos up 2-0 in just the first 20 minutes of the game.

However, that’s not all the scoring UCSB would accomplish in the first half. Just 10 minutes later, the Gauchos took a 3-0 lead after junior forward Amanda Ball successfully pursued a cross from senior midfielder Dakota Griggs. Eyeing Griggs’s cross from the left side, Ball positioned herself to take a header towards the far post, which resulted in another clutch goal.

Ball continued to shine in the second half when she scored the final goal for the Gauchos in the 52nd minute off a penalty kick due to aggressive play from the Panthers. Ball has proven to be a key player this year for the Gauchos. She has already contributed six goals in just three games this season, a significant improvement over last year when she scored a total of five goals.

While the Gauchos were able to hold the Panthers scoreless, it did require physicality and an aggressive style of play. UCSB tallied a total of 19 fouls while Pittsburgh earned 16. Each team received one yellow card. If the Gauchos have any expectation to continue their winning streak, they will have to be just as aggressive in their upcoming game on Sunday against the Utah State Aggies.

The Aggies come into Sunday’s game with a 2-2 record. Collectively, the team has only scored four goals this season, while they have allowed six. They have taken a total of 42 shots, 16 being shots on goal. The Gauchos have scored 10 goals this season, taking 38 shots with 24 on goal. UCSB’s shooting percentage of .263 and shots on goal percentage of over .500 make them an intimidating opponent for any team.

Utah State, however, does have a few strong points the Gauchos will need to look for. Senior forward Jessica Brooksby leads her team this season with two goals and two assists with a .125 shooting percentage. Brooksby has an impressive school record as she is ranked sixth all-time in goals scored with 18. She is also tied for third in single-season goals scored with 12 and is tied for first in single-game goals scored with three.

Another player to look out for is junior midfielder, Wesley Hamblin. Although she hasn’t scored a goal yet this season, she is ranked second on the team with eight shots taken. Hamblin is always active near the goal when she gets a chance, which means the Gauchos will have to play with a man-on tactic. Hamblin is tied for eighth in school history in career assists with nine and earned Second-Team All-Mountain West honors in the 2015 season as a sophomore.

The Gauchos will host the Utah State Aggies on Sunday, September 4 at 11 a.m. in Harder Stadium.