The Daily Nexus
Opinion
Colin Kaepernick: A Purpose Misunderstood
September 4, 2016 at 11:51 am by Sean White

The fictitious notion of a post-racial society has manipulated the minds of the racially uneducated as an unconscious temperament has been formed toward the inevitable reality of race in America. A mythical ideology constructed upon the false ideals of colorblindness, reverse racism and a neglect for white privilege in this country, America’s fabrication of a post-racial society has led many to believe that racism is non-existent today.

With the occurrence of the first African-American president Barack Obama being elected eight years ago, the popularity of interracial relationships increasing, the development of affirmative action in the job industry along with other minor advances blacks have encountered, the ill-judged reasoning used to justify the misled belief that skin color and race are no longer a factor in America undermine our country’s promise of justice, liberty and freedom for all. 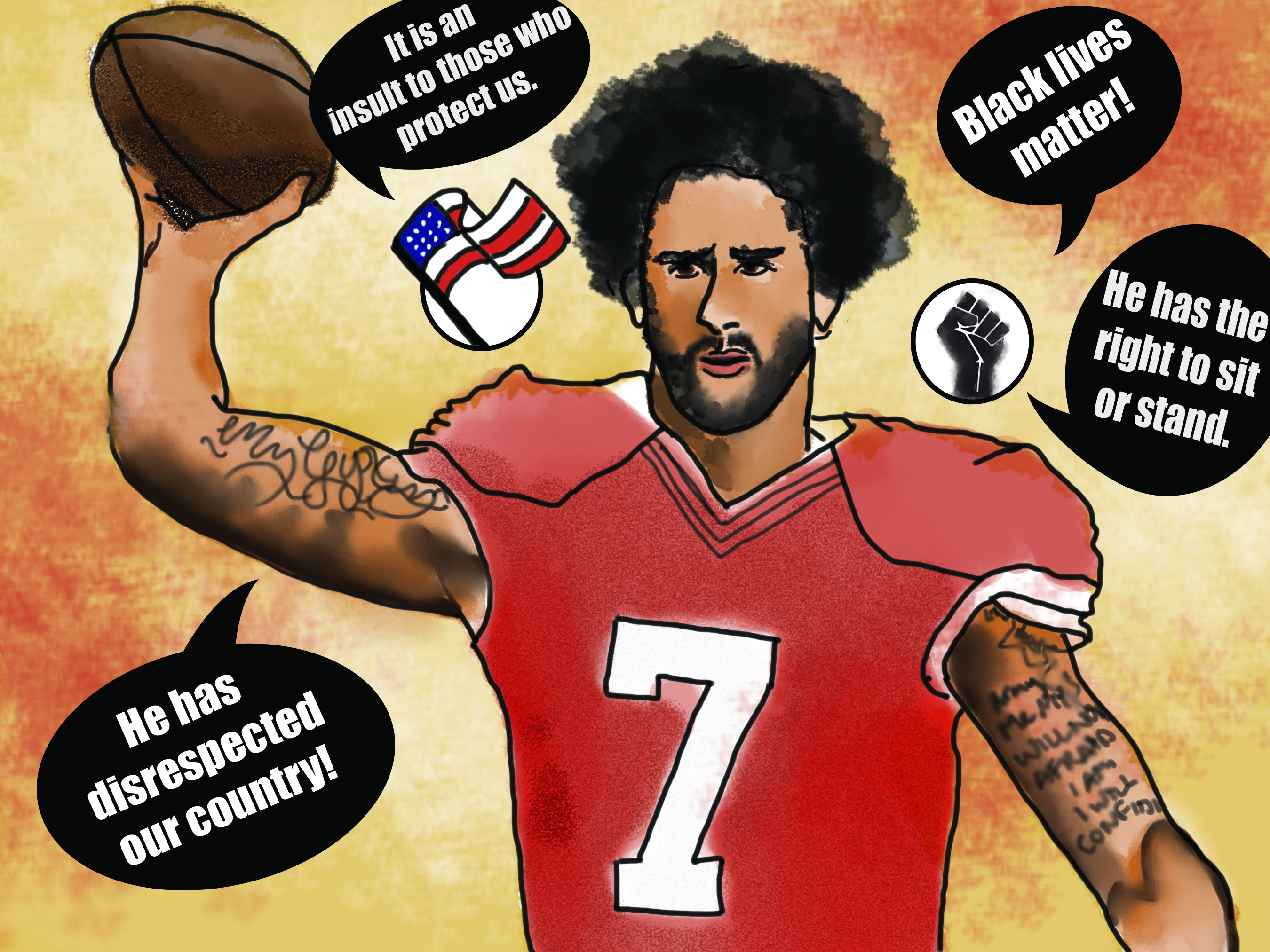 Recently refuting this flawed guarantee has been the action of San Francisco 49ers’ quarterback Colin Kaepernick.
Deciding to sit during the national anthem in all four of the team’s preseason games, Kaepernick’s form of activism is the most recent stance against the oppressive institution of racism. While America’s meritocratic standard of living suggest Kaepernick silence himself and be content with a life in football and the money he’s made, he has helped shed light upon the injustices of police brutality and racism toward blacks and people of color that are constantly overridden by the status quo of white America.

To no surprise, attempting to upstage the needed attention toward these injustices have been the anti-military claims of critics that do not realize the primary societal issue that Kaepernick is aiming for all to understand. Surely military soldiers risking their lives are appreciated and help ensure that the freedoms all Americans possess are protected.

Without their courage and commitment to our country, America could not sustain its permanence as the world’s best country. Yet, even a country that is protected by the best military force is faced by the harsh realities of oppression and racism, as black soldiers and other service individuals of color certainly have endured the systemic institution of racism.

Rather than be color blind the time is now for us to all be color conscious.

It is this reasoning in addition to the former veterans that are aware of America’s racial injustices that the trending Twitter hashtag in support of Kaepernick’s action, #VeteransForKaepernick arose. As a country, the acceptance of murder and destruction in the innocent lives of blacks and other minorities in the forms of police brutality, mass incarceration and racism should be intolerable. We must educate and inform ourselves of the injustices that exist within racism, white privilege and the myths of a post-racial, colorblind society.

Similar to the sentiments expressed by African-American author and activist Michelle Alexander, an excerpt I engaged with while watching Tim Wise’s “White Like Me” documentary; rather than be color blind the time is now for us to all be color conscious. The willful neglect toward racism and social injustice within America must be overcome. Ignoring the differences that exist between us as individuals from different racial backgrounds and upbringings, and failing to realize the past histories that help define blacks and people of color discredits their rightful belonging in this country.

I remain in support of Colin Kaepernick. The battle against the institution of racism has ensued for 400-plus years. There’s only so much a collective race of people can endure. Regardless of the reactions it produces, the call to action by athletes such as Kaepernick are essential during a time in which the lives of innocent humans, black lives, are not being valued and accounted for.

Sean White hopes Kaepernick’s protest will further the understanding of his sentiment.

I was not mad at Kaepernick for sitting down during the national anthem or using his First Amendment rights to speak about an issue he is passionate about. I was upset because he used them to perpetuate a myth: that people of color are being unjustly targeted by law enforcement. Police brutality is unjustifiable, I don’t think that anyone would disagree with that. However, once one looks at the statistics and victim reports, the problem becomes much more complicated than simply saying the police are racist. Most people say that there must be systematic racism in policing because blacks are… Read more »

To the African-American community: The Democrats have failed you for fifty years, high crime, poor schools, no jobs. I will fix it, VOTE “T”

This article is dog shit bro. Labeling something as mythical or fictitious is not an argument.