The Santa Barbara Democratic Party endorsed a slate of four candidates Thursday night for the Isla Vista Community Services District board of supervisors, a decision that could prove a significant setback for other candidates in the race.

Spencer Brandt, Ethan Bertrand, Natalie Jordan and Father Jon-Stephen Hedges, who consider each other running mates, received the Democratic endorsement for this  November’s election. The resources of the local Democratic Party — volunteer forces, mail-in flyers and cooperation with other local campaigns — will now be at their disposal. 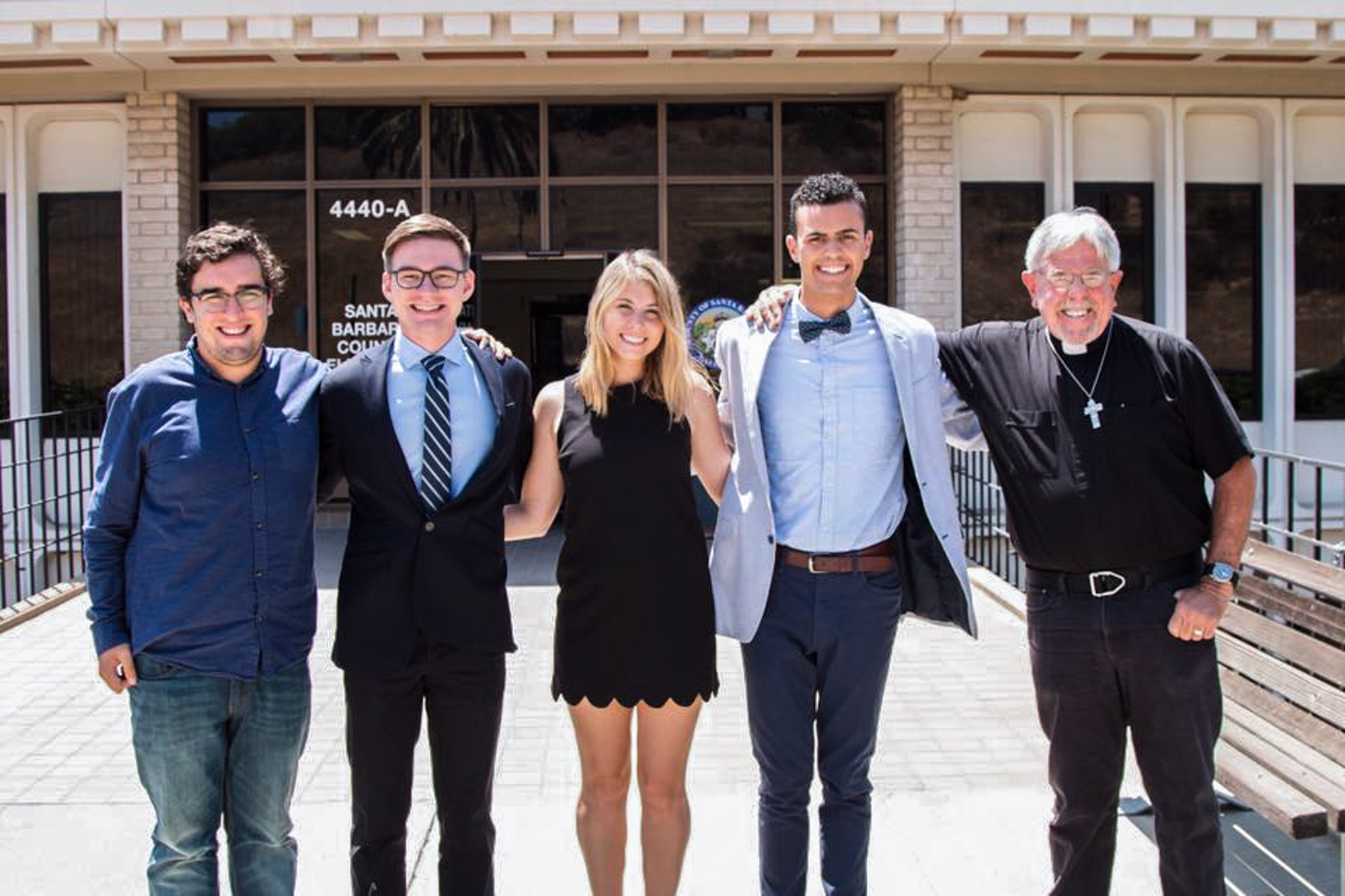 The CSD is a proposed government for I.V. formed under California Assembly Bill 3 (AB 3). Approval of Measure E in November will bring the CSD into existence and approval of Measure F will implement a utility user tax, allowing the CSD to improve infrastructure and institute community policing among other functions.

As outlined in AB 3, the CSD is to be governed by seven directors, five of whom are elected by Isla Vista voters. Four elected members are to serve four-year terms and one elected member serves for two years. For the inaugural election, however, two of the four-year seats will be two-year seats.

Jacob Lebell, a member of the SB Democrats’ central committee, said Wednesday it would be “no surprise” for the party to endorse the four residents. The local party has “good relations” with Brandt, Bertrand, Jordan and Hedges and the Yes on E & F organizers, he said.

The only other CSD candidate to seek the Democrats’ endorsement was Andrew Gabriel Pragin, whose intent was to gain the party’s backing in the competitive race for two temporary two-year positions. He is vying for a seat along with Jordan, Hedges and Michael Kile.

“The Democratic Party basically controls all of the voter registration volunteering efforts in Isla Vista, and they control all of the slate materials that are passed out. They have huge resources to draw from,” Pragin said. Gaining the Democratic endorsement, he said, is also key to receiving future endorsements from “influential” organizations like the Sierra Club and the Santa Barbara Women’s Political Committee.

“The Democratic Party basically controls all of the voter registration volunteering efforts in Isla Vista, and they control all of the slate materials that are passed out.”

Pragin and three of the four other “running mate” candidates met with local party officials Thursday at Pea Soup Andersen’s to undergo 15-minute interviews, which the party requires of candidates seeking endorsement. Jordan is currently out of town on a trip to Israel, and Elliott acted as her proxy.

Prior to the meeting, Pragin said he wanted the party officials to select him for his experience and “perspective” as a local volunteer, potentially selecting him over Jordan.

“I honestly want them to just look at my credentials, hear what I have to say and realize that they are under no obligation to accept the top-down Das Williams endorsement as their own,” Pragin said Wednesday.

He did not receive the endorsement, however, and will now begin what he called the “uphill fight” to seek further endorsements. Daraka Larimore-Hall, the chair of SB Democrats, said the party’s priority was to endorse candidates who “believe in Isla Vista self-governance” and will ensure the success of the CSD.

Candidates Jay Freeman and Kile opted not to seek the Democratic endorsement. Unopposed in his bid for one of the four-year seats, Freeman said he has had problems with “the Democratic Party establishment” in recent years despite his aligning values.

Kile said he is “turned off” to the Democratic Party entirely after being at the Democratic National Convention (DNC) as a Bernie Sanders delegate in July.

“The two-party system is a system of false choice,” he said. “Being at the DNC, I got to see all of that fakeness in the Democratic Party from the highest level down.”

The CSD board of directors candidates are running in a nonpartisan election, meaning their political affiliation will not be shown on the November ballot.

Local governance usually starts with principles such as one person- one vote, not let’s have outside interests appoint representatives to our board.