The Daily Nexus
Sports
UCSB Solidifies 3-0 Start After Shutting Out USF
August 31, 2016 at 5:00 am by Antonia Bird

The UCSB Gaucho women’s soccer team is riding high after its third game of the season. For the first time since 2010, the Gauchos start the season at 3-0 after taking down the San Francisco Dons with a 2-0 shutout on Sunday. While the Gauchos extend their winning streak to three, the Don’s drop to a 2-2 overall record. 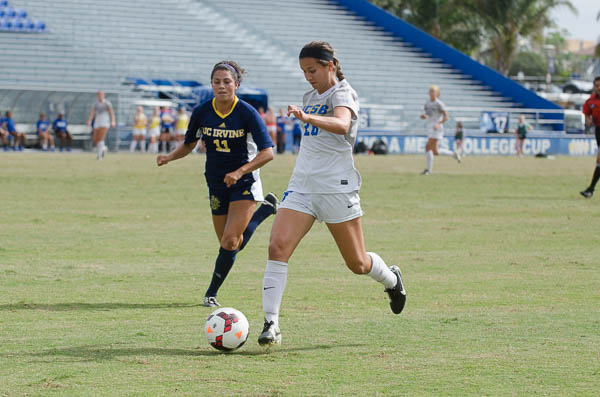 Unlike its first two  contests, the Gauchos did not need to extend themselves into overtime to secure this victory. In just the 12th minute, UCSB took a 1-0 lead over the Dons. Cohesive teamwork and excellent ball control were key factors in putting the first point on the board.

The play started with a solid pass off a corner kick from senior midfielder Dakota Griggs to the feet of sophomore midfielder Sydney Magnin. Magnin then connected the pass with a beautiful kick to senior forward Hannah Dearborn who earned her first goal of the season with a powerful header to the back of the net.  It was Magnin’s first assist of the season.

For Dearborn, she started one game last year while playing in 16 games and could see a lot more playing time after her spectacular performance against the Dons. A transfer from Colorado, last year was Dearborn’s first season as a Gaucho where she attempted five shots over the year and finished with 1 goal and 1 assist.

The Gauchos had possession of the ball for the majority of the first half as they fired off a total of six shots while holding the Dons to four. However, the second half looked more promising for San Francisco as they consistently put together 10 attacks in Gaucho territory, tallying a total of six more shots.

While the Dons looked good offensively, they had trouble with their defense. At around the 50th minute of the game, freshman forward for the Gauchos Hailey Barrett was the victim of a hard push from behind in the penalty box. The aggressive play resulted in a penalty kick for the Gauchos. Sophomore midfielder Mallory Hromatko drilled the PK into the net, giving UCSB a comfortable 2-0 lead and eventually a 2-0 win.

While the Gauchos were able to execute on offense, sophomore keeper Brittney Rogers held down the goal on the back end. Rogers has had an impressive season so far and has done a great job of taking pressure off the Gaucho defense.  Sunday’s game against the Dons marked her second consecutive shutout this year.

On the season, Rogers has not allowed a goal while also collecting nine saves. She had a total of five saves in this game, including one clutch recovery in the second half when Dons’ junior star midfielder Sonja Giraud had her in a one-on-one situation but could not get it past Rogers. Giraud was impressive on Sunday getting off a total of four shots for the Dons, but was consistently shut down by the UCSB defense.

Also contributing for the Gauchos was starting senior midfielder Dakota Griggs who had 2 shots on goal, and freshman forward Hailey Barrett with 1 shot on goal.

UCSB has had an impressive start to its season so far. It will host the next four games at home starting with the Pittsburgh Panthers on Friday, Sept. 2 at 5:30 p.m.  in Harder Stadium.