The Daily Nexus
Science & Tech
What Came First: The Venus Table or the Feathered Serpent?
August 25, 2016 at 12:07 pm by Dana Jessen 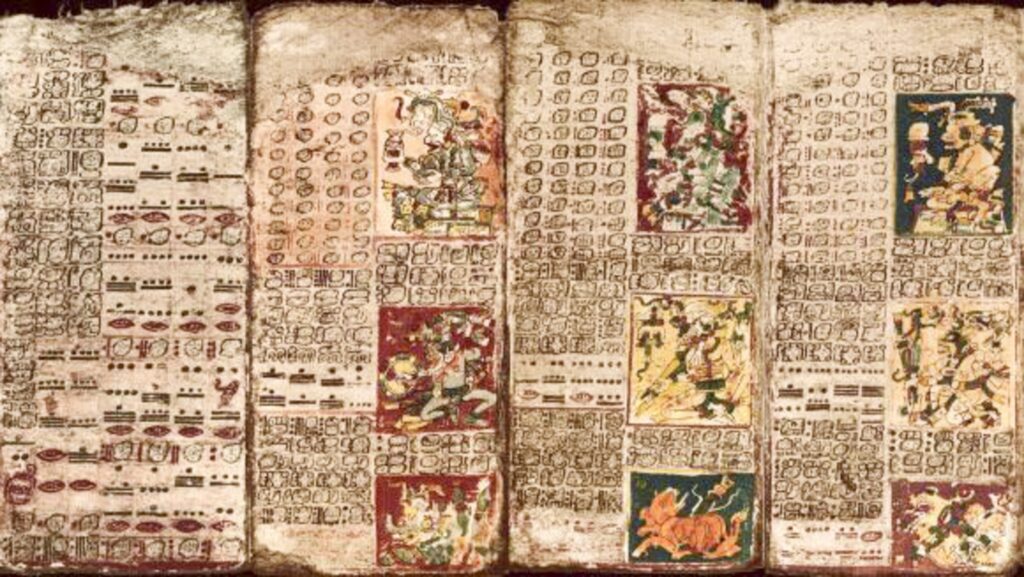 The image above displays the preface of the Venus Table, the leftmost column, along with the first three pages of the table found in The Dresden Codex. Following the preface, the Mayans would add the pictures of gods they would honor. Courtesy of University of California, Santa Barbara

Gerardo Aldana, a professor in the Chicana and Chicano Studies and Anthropology Departments at UCSB, presents a new interpretation of the Venus Table, which tracks the observable phases of the planet, in the Maya book, The Dresden Codex.

The Venus Table is an ancient Mayan astronomical and religious text from Chichén Itzá, Mexico used to honor their gods, according to Venus’ placement in the night sky. Made out of fig tree bark and gesso and written left to right in paired columns, the intricate hieroglyphs are meant to be read in a “Z” formation.

On page 24 of The Dresden Codex, the text of the table shifts from discussing rituals based on the Mayan calendar to a set of numbers and dates arranged in four columns to represent each of the cosmic regions: north, west, south and east.

During the 1880s, Ernst Förstemann discovered that the numbers in the Dresden Codex corresponded to Venus’ cycle of 584 days. Then in the 1920s, John Teeple found it contained corrections to accommodate for Venus’ actual cycle of 583.92 days over time, similar to how we invented the leap year for our solar-based calendar.

Teeple assumed these numbers were corrections because they did not match whole number intervals. However, Aldana is now arguing that these numbers are not just corrections but actually a recording of the Mayans discovering how to correct their Venus calendar.

“The first dates were not based in reality. The Mayans just wanted their calendar to be accurate, which is based in numerology, but these are actually historical dates. Some Mayan scribe was writing down when he was actually seeing it,” Aldana said.

The significance of his research comes in two parts: analyzing the sequence of rituals the Mayans had that took place in Chichén Itzá and then converting their findings to Mayan calendar.

“The circular building at Chichén Itzá has four little windows at each of the cardinal directions, and this is where they would place a [ceramic] god statue,” Aldana said. “Pictures of the gods, who they would have made figurines of, are after page 24.”

According to Aldana, researchers can know within 25 years of when the Mayans made their corrections. Specifically, it was made in the 10th century, also known as the Terminal Classic Period.

This process is akin to Nicolaus Copernicus, who discovered the heliocentric model of our solar system in the early 1500s while trying to correct the Gregorian calendar for Christian rituals.

“Both approached the problem in the same manner but did it in different ways,” Aldana said.

Archaeological records are sparse for the Terminal Classic period, the end of Mayan peak in innovation. For the Classic Period, it is typically noted who the ruler was, what he did and why they built the buildings. These notes were not made clear at Chichén Itzá’s site.

Aldana assumes that the patron is K’ak’upakal K’awiil because of his patronage of other works found near the Venus Table. According to Aldana, it may suggest that he was the ruler if he paid for such an important structure.

A major religious transformation was also taking place during the Terminal Classic period in Central Mexico. The introduction of a new feathered serpent deity, K’uk’ulkan (also known later as Quetzalcoatl in Aztec), began to appear in the archaeology.

“Stories come about a man named Quetzalcoatl who left his home in Central Mexico and went east. It says that when he got to the coast, he boarded a raft of snakes and sailed off into the sunset, caught on fire, and then he turned into Venus,” Aldana said.

Shortly after, images of feathered serpents who were called K’uk’ulkan began to show up around the Mayan areas.

“This discovery [of the Venus Table corrections] occurs right before this major religious transformation. So the question is, did one generate the other? What is the relationship between this interest as Quetzalcoatl as Venus and this discovery of Venus calendrics?” Aldana said.

The singling out of Venus in Mayan astronomy did not occur until the Late Classical period when the first record of Venus was documented. Aldana organizes the timeline in Mayan astronomy as such: Late Classical — interest in Venus. Terminal Classic — Chichén Itzá — heightened interest in Venus and witnessed the discovery of the Venus cycle. After that, Venus is found all over the place with Quetzalcoatl.

Aldana believes that more attention needs to be paid to what the hieroglyphics are saying. According to him, it is easier to tell what the Mayans were thinking from the nuances found in the texts.

“In Chicano Studies, we try to make connections to the past [through] art. Now we are giving a greater structure and link to what they were saying in the past and how we are interpreting that today. These are indigenous authors writing for indigenous people. Usually it is foreigners writing about indigenous people, and that is a totally different perspective.”