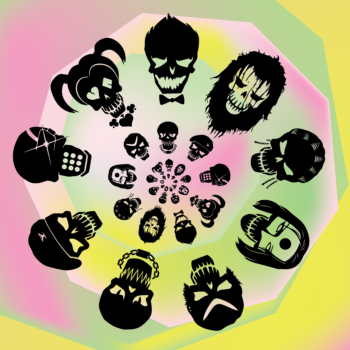 What’s this? Color? Humor? Fun characters? A somewhat serviceable plot? My god! DC is actually trying this time! Too bad they still have ways to go.

“Suicide Squad” is the third film of the thoroughly meh (at best) DC Extended Universe, focusing on the titular misfit anti-heroes as they are dropped into some generic city to clean up the mess brought about by the incompetence of the supposedly cunning Amanda Waller.

To DC’s credit, the marketing campaign for this movie was pretty decent, never actually revealing the main villain and setting the action to a bunch of classic rock songs. Unfortunately, there’s barely anything left to see after the fact.  Practically all the movie’s action was in at least one of the half-dozen trailers.  There’s barely anything to surprise you with anymore, except maybe the fist-sized holes in the script.

Thus, the characters have to carry the movie on sheer strength of personality alone. Harley Quinn (Margot Robbie) accounts for a good two-thirds of that personality. In a previous article, I mentioned liking Kate McKinnon’s character in “Ghostbusters” for her “crazy and loving it” persona and that applies here too. Quinn gets the funniest lines, and the personality that Robbie exudes meshes well with everyone she meets. But the Clown Princess of Crime also sums up to total and complete fan-service, no doubt about it. Why else would she wear all those skimpy outfits? Certainly not for the Gotham weather, I’m sure.

While we’re on Harley, let’s diverge a moment to talk about Jared Leto’s Joker. Much like Jesse Eisenberg’s Lex Luthor, the character barely feels like his comic-counterpart. He doesn’t have any of the trademark gag-weaponry, or even tells any jokes. Then again, neither did Heath Ledger, although Ledger at least felt threatening. This Joker is definitely unstable too, but what with the tattoos and the flirting with his enemies, he seems more like a cross between a gangster and Dr. Frank-N-Furter from “Rocky Horror.” Worse, while he does drive the plot maybe a few feet uphill or so, he isn’t given anything interesting to do. He’s a side villain, at the very best.

And that’s a shame, because the movie would have been far better off giving more time to develop Joker than focusing on the actual main baddie, Enchantress (Cara Delevingne). For most of the movie, all she does is stand in one place watching a pillar of light. Although her character design is definitely plenty threatening thanks to her glowy eyes of doom, she wears outfits that would be better suited for a beachgoer than a sorceress bent on (of course!) world domination. It’s as if in these movies, if you’re a woman, the less you wear the more powerful you are.

All right, how about everyone else? Well, considering how absolutely packed this movie is, Deadshot is the only other member of the squad to get any decent length of time devoted to fleshing him out. So you do end up caring about what happens to him.

Everyone else gets a quick little summary that feels as brief as the attention span of a sugar-hyped toddler playing Pokemon Go. Croc has the cool makeup, Boomerang carries a stuffed animal, Katana has a mask and Slipknot might as well have been wearing a red shirt. They try to develop Diablo, but the contradictory choices he makes toward the end stifles that attempt.

Final verdict? “Suicide Squad” is the third car in DC’s ‘meh’ train. A couple characters are fun, but the action and story? Not so much. The Joker disappoints. The writing’s inconsistent. The editing can be pretty choppy at times, too. But at least the soundtrack’s pretty sweet.