The Daily Nexus
The Brew Review
The Cider Series: Capped and Carbonated
August 16, 2016 at 12:27 am by Simone Dupuy 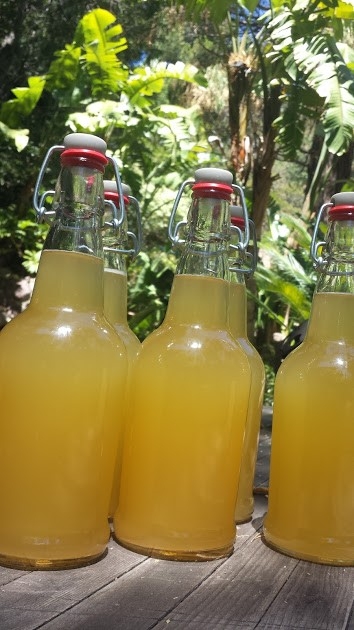 In the previous installment of The Cider Series, old apple cider was siphoned, young apple cider was supervised and some cherry cider was born. If you got through that entire article, I just want to say a couple things: One, that means a lot to me, thanks; two, I hope you’re back and ready for more.

As mentioned, last time we encompassed the siphoning experience with the first Proulx Brew: Thomasson Oak Edition. After that, it sat in secondary fermentation for exactly one week, just chillin’ in an airlocked jug supposedly converting the last of the sugar to alcohol and gas and allowing flavors to mellow. Now, is there a reason I allowed it to sit exactly one week? Yes. That reason is that I left town for exactly one week and couldn’t wait to taste and bottle immediately upon returning home. Ideally, one is supposed to let the brew mellow anywhere from 30 days to two months, with some mega-patient brewers siphoning off their cider into a tertiary fermentation for another three to six months. I did not do this. Perhaps I should have.

As you may recall, the taste test conducted prior to secondary fermentation yielded very happy results. This young cider was reminiscent of flat, slightly appley champagne. The internet told me my cider would only get better with time. I was lied to.

You know that feeling when you see an oatmeal chocolate chip cookie and you’re so excited and you snatch it up and stuff it in your mouth, ready for sweet, sweet bliss and then what you thought were chocolate chips are actually raisins and your whole world comes crashing down around you as you slowly chew and swallow the subpar treat? That’s how I felt tasting my cider.

“This tastes like shit,” said the bassist of my brother’s band when I brought the stuff down to the basement for a third opinion. My brother and the drummer agreed. At least this criticism was clearer, albeit not particularly constructive.

With a heavy heart, I attached my bottling wand to the end of my siphon tubing and enlisted the help of my brother in filling my rubber-sealing pint bottles (all of these things having been sterilized previously, of course). I chose flip-top airtight bottles so I could easily check on my cider and re-seal it, but you can also invest in a capper and some generic bottles and bottle caps. Again, my bottles were on the ground atop a spill-catching tray and some newspaper while my jug of cider sat on the counter so gravity could help me fill my new vessels.

Once they were all full with a couple inches of room to spare for ingredients to come and carbonation to form, I sacrificed one of the bottles for experimentation. I ran upstairs to my dad’s office and downstairs to band practice with differing ratios of added sweetener, trying to perfect the least shitty version of the Thomasson Oak Proulx Brew. Eventually, I added about a packet and a half (a little more than half a teaspoon) of Apriva — aka store brand Splenda aka sucralose and dextrose — to each pint. Remember, yeast eat sugar and there are still some of those microbes in the bottled brew, so using artificial sweetener is important if you want to actually sweeten your cider and not make a super alcoholic pressure bomb in your airtight bottles.

If I wanted to make still cider, I’d close these babies up and pop ’em in the fridge right then and there. However, I wanted the bubbly stuff, so I pulled out my handy dandy dextrose (cheap on the internet and creates more effervescent bubbles than table sugar) and poured in half a teaspoon to each bottle. My five pints of cider now sit on a shelf in my closet as the dextrose turns to carbonation over the next two or three weeks. Back carbonation happens more quickly at higher temperatures, hence the reason I’m not storing them in the fridge. Ten days into the process now, I’ve popped open one of my pints to check its progress, gotten a very feeble tsss upon opening and tasted it to find its flavor better than before, but with the carbonation of a day-old soda.

Next time, The Cider Series should bring a final taste test of the Thomasson Oak brew and primary taste tests of the Canyonside brew and Cherry Bomb, both of which are just about ready for secondary fermentation. As for now, I’m looking for suggestions on what type of juice to ferment next and for someone to design a label for my bottles. Best design gets a free pint of my shitty cider. I’m 100 percent serious. Please send submissions to copy@dailynexus.com.