You know what they say: Write drunk, edit sober. In the spirit of our subject matter, I am glad to inform you all that I am doing just that. Amazingly, in just this first sentence I have already put my laptop in danger of drowning in IPA while attempting to type and drink at the same time. I have since retrieved a trusty bendy straw from the cabinet so as to write and imbibe simultaneously. But I digress; this is about homebrewed cider, not the beer I bought for my brother then decided was better utilized for creative purposes. Since the brew began, a surprising amount of excitement has manifested itself. 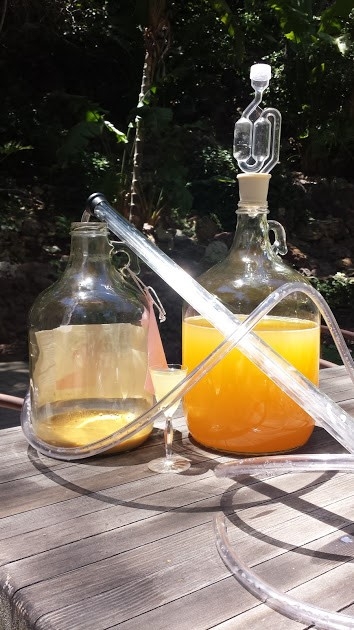 The leftover yeast is pictured on the left, the siphoned-off cider on the right and a sample of the cider in the middle. Also depicted are the auto-siphon and tubing, wrapped around the rest. Simone Dupuy / Daily Nexus

An Update on the OG Proulx Brew: Thomasson Oak Edition

When we left off, Proulx Brew: Thomasson Oak Edition was steadily bubbling, releasing carbon dioxide and, of course, precious, precious alcohol. Because I am a human being, it was hard for me to watch the bubbles slowing, knowing I’d have to wait until they were nearly stopped to use my shiny new auto-siphon to pump it into secondary fermentation. But I waited. I left town to resist temptation, braving the 115°F heat of Palm Springs. Like Jesus forgoing water and food in his 40-day trek across the desert, I too forewent my lifeblood in my two-day separation from my cider. Lol jk, it was lit. So anyway, I came home to a bubbling I deemed slow enough for auto-siphoning (bubbles in the U-tube were more than 20 seconds apart). It had been 10 days since consistent bubbling had started and, given that the time frame for primary fermentation was one to two weeks on most online sources, I seemed to be on track.

The secondary fermentation process, though unexciting when reached, requires a lot of preparation if a homebrewer wants everything to go smoothly. I gathered all the supplies I would need: my auto-siphon (a trombone-like mechanism that builds pressure as you pump it and draws liquid from, in this case, a one-gallon jug of cider), some food-grade plastic tubing (through any type will work well enough as long as it’s clean), some Star San sanitizer, my gallon of brew, a second glass gallon jug and a cookie sheet. Now, I did say that I “gathered” my brewing cider, but it is important that the jug remain sedentary for at least a few hours before transfer to secondary fermentation, preferably more. Ideally, the cider is placed wherever siphoning will take place a day or more prior to doing so in order to allow the yeast to settle, thus collecting the purest cider possible. With my Proulx Brew ready and waiting on our bar counter from a few days before, I sanitized all of the previously mentioned equipment in Star San as per bottle directions (except the cookie sheet) to sterilize my precious cider’s future environment. Once dry, I assembled my apparatus: On the ground beneath the bar (so that gravity would be on my side), the empty bottle stood on the cookie tray (my mother insisted on this spilled-cider-catching precaution).

I dipped my pump into the brew and siphoned off a quarter cup of it to taste, then pumped the rest into the second jug, spilling cider in the process of moving the tubing, just as Mom had envisioned. It may not sound it, but this process was actually extremely stressful. Not only did I manage to get sticky cider all over my feet, but building pressure in the auto-siphon took a little more finesse than I expected and, being an aspiring microbiologist, I am obsessed with sterility and happen to know that it is constantly raining millions of microbes that could compromise my cider. So, my lack of siphoning talent left more time for microbes to rain into my exposed cider and cause me enough stress to stir up the yeast that had so nicely settled to the bottom of the jug. In the middle of all this, of course, I remembered that I should be taking instructional photos so I was also trying to teach my parents how to use my phone’s camera, which we all know is quite a task.

In any case, I got most of the cider into the jug for secondary fermentation and left behind the bulk of my yeast culture, the fate of which I will get to later. Because I had other plans for the Thomasson Oak brew’s original plug and fermentation cap, I had to opt for the homemade apparatus I described in “The Brew Begins,” pictured here. From here on out, the last of the sugars will be metabolized by any remaining yeast and the cider’s flavor will mellow. “But what does the cider taste like now?” you may be asking. Well…

Serving as guinea pigs for this first edition of Proulx Brew are myself and my parents, Jacques and Lisa Dupuy. As a bit of background, neither of them are even beer drinkers, let alone cider connoisseurs. However, my mother is a former food reviewer and my father a lover of fine things, especially a good bourbon and Coke, so you can probably trust us. I presented our golden samples in tiny brandy snifters for dramatic effect. 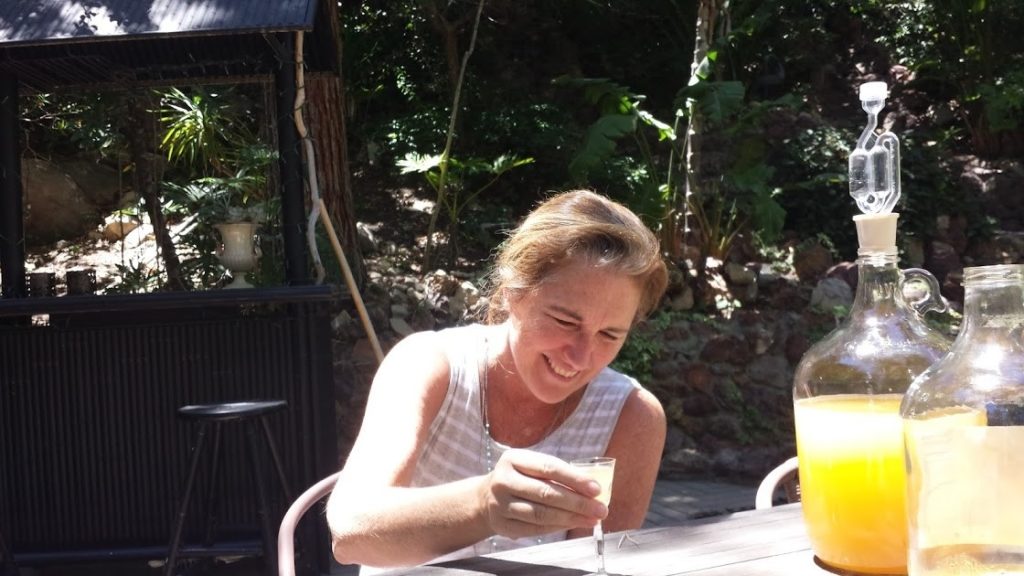 Upon first taste, I was happily surprised. This being my first time homebrewing, I expected mediocrity, but what I got was … better than mediocrity! I’m the type of gal who takes her coffee black so the tart, slightly sour, all-the-sugar-has-been-turned-into-alcohol flavor hit home with me. The young cider didn’t leave me wanting anything, really, though countless brewing blogs told me I’d want to add Splenda (a sweetener the yeast cannot metabolize, thus actually sweetening instead of spiking). My mother agreed when I said this tasted like Martinelli’s and champagne had a baby. Not too dry and not too sweet, even at this stage, it’s the alcoholic beverage I never knew I wanted.

“I’m not getting any apple from that, I have to say,” Papa Dupuy pointed out. And, true, it wasn’t extremely appley, though I felt I had gotten a taste. I had read that this might be the case; the solution is to add back in apple extract after fermentation is complete but before bottling, but honestly, I don’t care enough to invest in a bottle of the stuff. Homebrewers have had success with apple and cinnamon extracts, but I’ll save those for experimentation down the road.

The general consensus among the (21 and over) family was that this initial version of the cider was reminiscent of flat champagne and generally exceeded our expectations. Dad even attested he’d “rather drink that than beer any day.” It can only get better from here … knock on wood.

An Update on the Proulx Brew: Canyonside Edition

Last time I mentioned that, in my excitement over the first, I pitched a second jug of cider using a wine yeast which I have since christened “Canyonside” after the name of the wine-dy road I live on … get it? Anyway, Canyonside Brew is chugging along, coming to krausen stage much faster than the Thomasson Oak edition, likely due to the increased amount of added sugar, aka yeast food. Soon, Canyonside will be ready to move to second fermentation, so I’ll need to invest in another jug…

What Happened to that Leftover Yeast from Proulx Brew #1?

Well, I’ll tell ya! I journeyed to the promised land (Trader Joe’s) and picked up three types of (REMEMBER: pasteurized but non-preservative) cherry juice. After a taste test, I concocted what I hoped would be an appetizing feast for my yeast now and for myself later. Directly into the gallon jug with my leftover yeast culture, I dumped one quart TJ’s 100% Red Tart Cherry Juice, one quart TJ’s 100% Cherry Juice, 1 ⅓ cups of one-to-one brown sugar simple syrup for added alcohol content and then topped off the jug with TJ’s Cherry Cider. I popped on the plug and fermentation cap (which I had dipped in sterilizing solution from before) and let my Proulx Brew: Cherry Bomb experiment go. 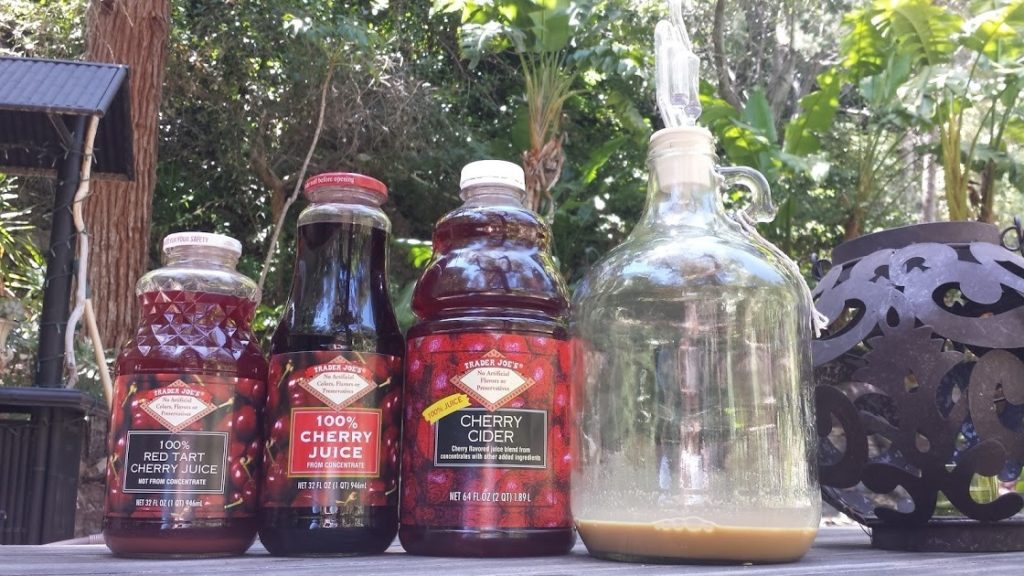 After a couple hours, I learned that I had rightly named the concoction; the jug was not only bubbling and in full krausen stage by then, it was overflowing and creating CO2 in such great volume that it had forced off the jug plug. A couple rubber bands and a precautionary cookie sheet later, I’m pretty excited to see where this goes.

The next edition of The Cider Series should explore bottling, back-carbonation, more taste tests and whatever the hell happens to this Cherry Bomb. Until then, brewers.