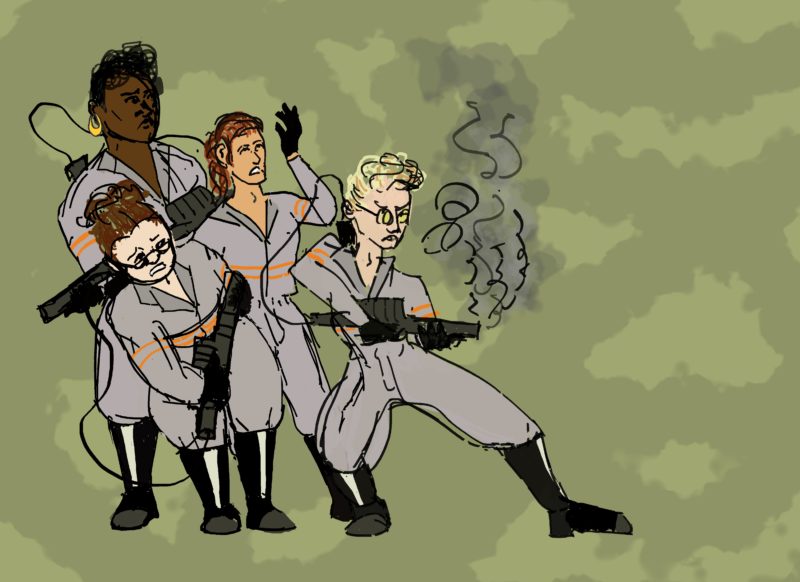 I laughed pretty damn hard as I watched the scene in which it is revealed that “Dante’s Inferno” was, in fact, actually a prophecy foretelling the end of the world. One catch: That was from the trailer for the third “Da Vinci Code” movie. For “Ghostbusters,” I actually kept a tally of how many times I merely chuckled versus when I actually laughed out loud. The final score? Six to zilch.

Unfortunately, “Ghostbusters” is not as funny as it thinks it is. The movie has a few of those aforementioned chuckle-worthy moments (to be sure, the movie is not entirely devoid of humor), but on the whole, it takes itself way too seriously. The constant presence of ominous music while the busters spout technobabble about the impending end of the world is a melodramatic, futile attempt to insert serious drama in a movie where a ghost hijacks a car and takes it for a joy ride. The original movie realized the goofiness of its premise and ran with it, but the reboot tied its shoelaces together, leaving it to fall face-first to the pavement.

The Ghostbusters themselves are serviceable characters. Melissa McCarthy is the straight woman of the group, the person who takes things seriously, but has barely any personality to her name. The impressively loud Leslie Jones is the street-smart Patty Tolan, whose only defining trait other than being the new recruit is that she knows a bunch of trivia about New York buildings. And then there’s Kristen Wiig as Erin Gilbert, the shamed professor who makes the stupidest decisions out of anyone. She also lusts after Chris Hemsworth’s Kevin Beckman, at one point sneaking up on him to mime humping his behind. The creepiness of said “relationship” is compounded by the fact that Beckman is practically mentally challenged: He paws at the glass of an aquarium to get at a fake phone inside, thinking that it’s real.

The only one of the central characters who is genuinely any fun is Kate McKinnon’s Jillian Holtzman.  She’d get a plus in my book immediately just for the fact that she wears glacier glasses, the coolest looking specs evah (if you’re a “Hellsing” fan, that is). But she also falls into the archetype of “crazy and loving it” with her gung-ho attitude and bottomless capacity for eccentricity. She delves into camp territory, but it’s the fun, rollicking kind of camp.

The villain, Rowan, however, falls into the Saturday morning cartoon variety. He is evil for the sake of being evil, with a vague, clichéd plan to destroy the world that he executes in confusing, boring fashion. In a particularly weird scene, as he talks to himself within the confines of a tiny restaurant, he draws the Ghostbusters logo with fangs while vowing to destroy the Ghostbusters. Not only does he risk outing his plan to a bunch of anonymous New Yorkers eating their lunch, he also makes the logo of his sworn enemies scarier? I get that it’s supposed to be foreshadowing, but in the context of that particular scene, it’s just plain odd.

Much of the central cast of the original Ghostbusters returns for cameos, a few of which are really shoehorned in, especially Dan Akroyd’s; he shows up, espouses more paranormal gibberish to Gilbert, who doesn’t even bat an eye, before driving off with an “I ain’t afraid of no ghosts.” Shoot me.

“Ghostbusters” is a mediocre attempt to ride the coattails of Ivan Reitman’s original film.  It tries to pay homage with some familiar story elements; whether or not it succeeds is up to you. But it never quite manages to be hilarious, settling for only mildly funny, which admittedly isn’t as much a flaw as it is a disappointment. The plot feels rushed and lacks any emotional weight. And the leads, most tragically of all, fail to measure up to the original four.

If Alex Wehrung doesn’t like it, then it must be worth seeing.

The cast (probably the best comedic actors of the era) was what made the original so great. They took the movie’s premise and made it rock and roll. The reboot? Forget it/

OMG I cant belive this micro aggression. You clerly havent taken fem studies 43 or any fem studies class. UHhhhhgg this article is why they should be maditory for ALL males. They womyn in this movie are literally the best and for you to try to mansplain why they arent funny only perpetuates the (incorrect) stereo type that women arent funny. Please revise this review to explain why it is one of the best comedies of the year instead of being so sexist.