Students have been biking, skating and running furiously through the streets of Isla Vista, channeling their 1990s nostalgia as they join the Pokémon Go craze sweeping the nation.

The mobile game, released six days ago, uses augmented reality to place the original 151 Pokémon characters in the real world, with players capturing the small creatures and finding gyms in public places where they can challenge other characters.

Residents of I.V. were seen gathering on Del Playa Drive and surrounding streets throughout the weekend, foregoing parties to share information on a water type pokémon by the ocean or battling to gain possession of gyms.

Michael Valdivia, a fourth-year film and media studies major who was playing Pokémon Go on Monday afternoon in the Window To The Sea Park, said he spends six to eight hours a day playing the game.

“You can just walk around and get people up and going,” he said, due to the real-life scope of the game.

I was looking for a party in isla vista last night at like midnight and all I found was people playing Pokemon go. Smh

Pedestrians in I.V. have long been known to command the streets, and the game has prompted residents to scramble through the town with their eyes affixed to their phones.

“That tends to be the norm around here, but it was a little bit more dangerous that people are driving around and on bikes, people almost getting hit or stopping traffic because they’re ready to catch something,” Valdivia said.

According to the UCSB Police Department, there have been no calls related to students finding themselves in unsafe situations in the past week as a result of the game.

In light of various incidences across the country, however, including an armed robbery and the discovery of a dead body, the app’s developers, The Pokémon Company International and Niantic, said in a joint statement that users should be cautious while playing the game.

“We encourage all people playing Pokémon Go to be aware of their surroundings and to play with friends when going to new or unfamiliar places. Please remember to be safe and alert at all times.” 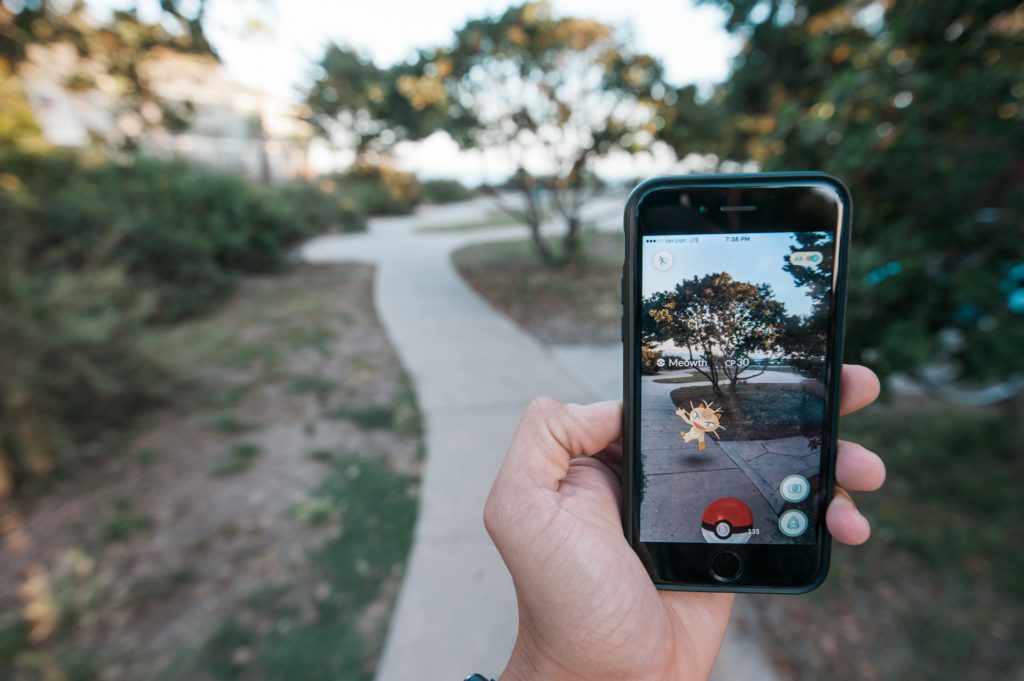 Augmented reality utilizes the smartphone’s camera and gyroscope to render a pokemon as if it appeared in the real world. Lorenzo Basilio / Daily Nexus

Kevin Boyd, founder of the “Pokémon-Go IV” Facebook group and a fourth-year chemistry major, said gamers in I.V. are taking precautions and traveling in groups, something he says the app helps initiate.

“There’s always a risk when you’re just outside in general, especially if you’re alone,” he said. “One of the great things about the app is if you don’t have anyone to go with, it kind of creates a way to meet people.”

Boyd went to Greek Park on the corner of Embarcadero del Norte and Segovia Road when he first got the application and said he was “blown away” to see approximately 30 people at the location.

“I’ve seen a lot of people on the Facebook group saying, ‘Who wants to hang out, take a couple drinks tonight and go then go catch pokémon?’ so people are really getting together, hanging out through the app,” he said.

Numerous other Facebook groups, each with hundreds of members, have been created to unite Pokémon Go players on campus and in Isla Vista, including “UCSB Pokémon Go” and “Pokémon GO Invades UCSB.”

The app’s popularity continues to skyrocket, with more installments on Android devices in the U.S. than Tinder as of July 7, according to data reported by SimiliarWeb on Sunday.

Pokémon Go numbers also soared in app engagement with over 60 percent of users in the U.S. who downloaded the app playing on a daily basis, setting the app up to overtake Twitter in daily usage.

The game has already beat out Instagram, Snapchat and Messenger in terms of the total amount of time a user spends on it each day, averaging at 43 minutes and 23 seconds a day.

YES! This is awesome