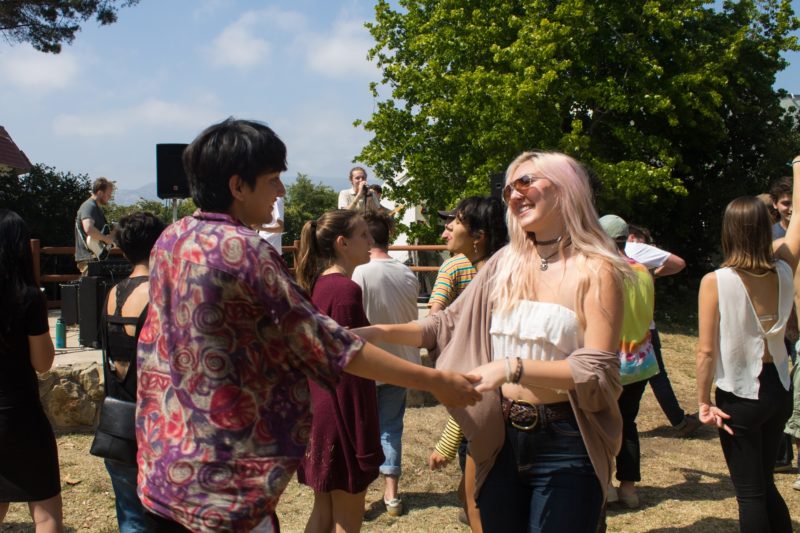 Weekends in Isla Vista are not just for popping bottles. Over 50 people gathered in Anisq’Oyo’ Park last Saturday to indulge in the 2016 Wordstock Music Festival presented by WORD, the Isla Vista arts and culture magazine. Whether it was braiding friendship bracelets or dancing to local group Poster Child’s cover of “Hotline Bling,” Wordstock demonstrates that there’s more culture to I.V. than its oft-prevailing perception of a madhouse party scene.

“I think that WORD brings a new perspective to Isla Vista and UCSB,” magazine writer Sarah Scarminach said. “It is an arts and culture magazine, but the magazine shows a lot of lesser known aspects of I.V. It presents I.V. in a different way, so it’s not just the party town most people associate it with.” 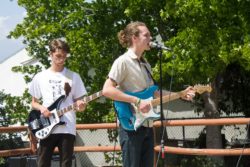 True to its mission, Wordstock featured a variety of performances and activities encapsulating the diversity of the I.V. community. Live music from bands Poster Child, Sin Palabras and Cooler Hats enticed the crowd to sway and groove with their beats. Spoken word from poets like Frankie Cunningham and Too Zen, packing hard-hitting punches, asked attendees to reflect on the connection between a father and son, or weigh the distance between past relationships and present ones.

WORD poetry editor Jason Chun proposed the spoken word sessions as an addition to the live music in order to further unite the I.V. community.

“We wanted to have something that appealed to everyone,” Chun said. “I suggested the poetry sessions, thinking that we needed something to smooth out the transitions between bands; everyone seemed to like the idea.”

In between the music and poetry sets, Wordstock raffled off gift baskets with items donated from businesses and departments such as the Isla Vista Food Co-op and UCSB Theater & Dance. Complementing the live entertainment, activities like bowling, face painting, temporary tattoos, friendship bracelet braiding, tie-dying and photo booth sessions gave attendees a chance to familiarize themselves with the magazine and engage with the culture. Copies of the spring 2016 issue were placed on several of the activity tables, free for the taking. 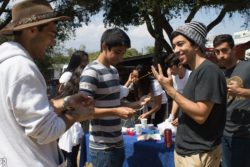 Of course, the I.V. tribute would not be complete without a nod to I.V.’s legendary resident albino raccoon. Scurrying through the festival, both literally and figuratively, was WORD’s unofficial mascot. Not only was the critter materialized via a mask consisting of a white foam cup and a paper plate (worn by illustrator Sonam Zahrt-Tenzin), but it also appeared on the cover of the Spring 2016 issue, WORD’s hand screen-printed t-shirts and the backdrop of the photo booth.

“It seems like a cross between a mascot and a running gag,” Chun said when asked about the story behind the raccoon. “We’ve had a column in, I think, every issue called “The Albino Raccoon,” and one of those is on the cover of the spring issue.”

Indeed, WORD’s “The Albino Raccoon” of spring 2016 featured JàNae Powell’s “Being Black on a Campus That Isn’t.” In addition to this, the zine contained articles ranging from one writer’s “friendship experiments,” a defense of Planned Parenthood, and a photo series on ballerinas of I.V.; issue 28 highlights multiple compelling topics and an array of talent.

Sam Arrow, co-editor of WORD, acknowledges the magazine’s importance as a creative outlet for UCSB students.

“We have a lot of artists and writers who don’t really have a lot of other opportunities to do what it is that they do for WORD, especially given the S.T.E.M.-focused nature of UCSB,” Arrow said. “The issues that we produce are always free and pretty accessible, so I guess there is an obvious entertainment aspect in that.”

Encompassing the motley culture of Isla Vista while simultaneously spotlighting unique experiences is no easy feat. Individual stories often fall to the wayside amidst mainstream attitudes toward I.V. and UCSB, but WORD’s commitment to showcasing an assortment of diverse voices reverberated throughout Wordstock and gave residents a chance to engross themselves in the community.