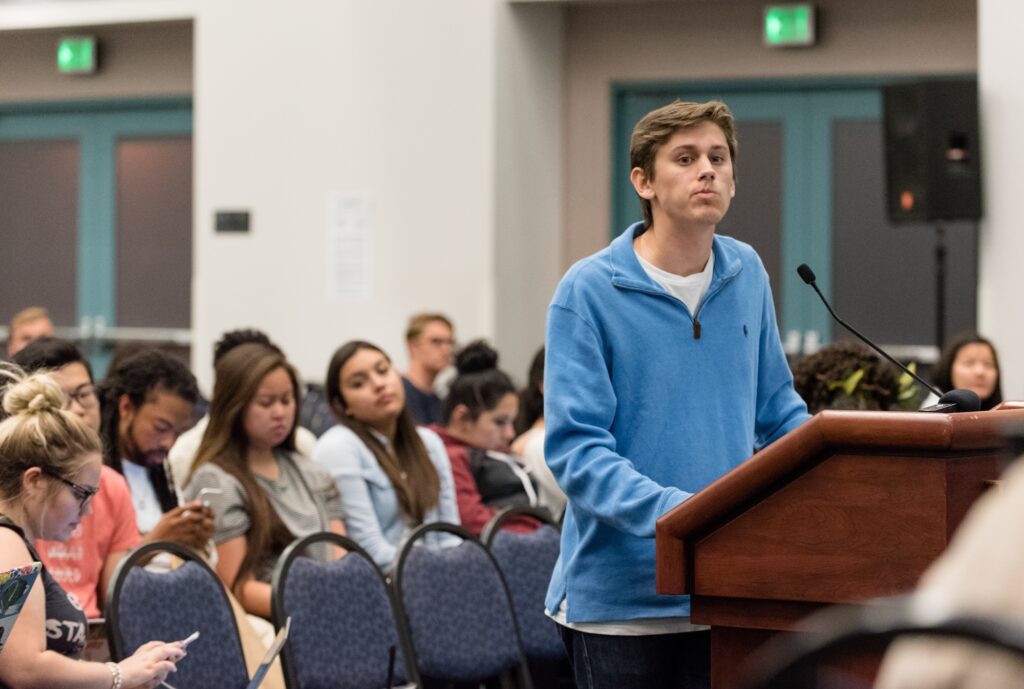 After investigating bribery allegations against the Interfraternity Council (IFC), a UC Santa Barbara committee says it has found no evidence of wrongdoing.

One week after the Associate Students (A.S.) announced spring election results in April, the A.S. Elections Board alleged that the IFC “bribed” its chapters by awarding philanthropic grants to those that achieved the highest voter turnout. The A.S. Senate called upon UC Santa Barbara Audit and Advisory Services to investigate the allegations.

The committee found that the grants were “intended as more of a contest among IFC member fraternities” than a bribe, Robert Tarsia, directory of audit and advisory services, said in a letter to A.S. Executive Director Marcela Marquez, on May 26.

Because the grants did not encourage voting for specific candidates and measures and were intended to be awarded to fraternity chapters instead of individuals, Tarsia says, the committee found no evidence of bribery.

On June 6, the A.S. Elections Board issued a public apology to the IFC. Although it stands by its decision to bring the issue to the public, the board said its allegation of bribery was “the wrong word to use and a bold accusation to make.”

“We are genuinely sorry for any damage we did to the reputations of any organizations or fellow students,” the board states in its apology. “The intention of our letter was not to vilify any student or group, but rather to inform the student body of our concerns.”

The board also apologized to Gonzalez, saying that it “unintentionally hurt a fellow student” while pursuing its goal of ensuring a fair election process.

“Every member of Elections Board knows how difficult it is to be a student, so we apologize for the added pressure, scrutiny and unwanted attention our accusation has brought Brendan,” the board states.

According to its letter, the audit and advisory committee came to its conclusion after interviewing several parties, including the student who initially brought the complaint to the elections board, as well as IFC Council Advisor Miles Ashlock and IFC President Brendan Gonzalez.

Ashlock, who is also the assistant dean and director of the Office of Student Life, told the committee that he approved the original grant program, based on his understanding that all money would be used for “charitable activities.”

The letter says participation in the program was voluntary, and “participation thresholds” would determine the amount of grant money awarded, between $200 and $400 for the winning chapter.

“Nonetheless, I am very disappointed in A.S. Elections Board and A.S. staff members for allowing these false accusations to be circulated to the campus community.”

The committee also interviewed Marquez, the A.S Elections Board and other members of the A.S. staff, according to the letter, and Tarsia notes that the committee researched the spring election through campus newspaper articles and social media posts.

As it continues the investigation, the committee will determine whether the IFC’s intended grants resulted in “serious voting irregularity as a result of undue influence on student voting.” It will also research if the grants violated the A.S. Elections Code, Campus Elections Commission Guidelines or Campus Regulations.

The committee says in the letter that the A.S Elections Board was acting in an “unprecedented” situation and acknowledges that its request for an investigation was “a prudent one.”

Gonzalez initially responded to the bribery allegations in a letter to the Nexus in April, saying that “The IFC has been unequivocally transparent about these grants.” In an email Wednesday, he said he was glad the preliminary findings confirmed what he has  “known and repeated from the start.”

“Nonetheless, I am very disappointed in A.S. Elections Board and A.S. staff members for allowing these false accusations to be circulated to the campus community,” Gonzalez, a second-year political science major, said in an email.

Because the A.S. Senate is no longer in session, outgoing A.S. President Jimmy Villarreal, who shared Tarsia’s report in an email Wednesday, said further matters regarding the investigation will be directed by the Villarreal Election Commission. The Senate approved the commission last Wednesday, and Villarreal is currently in the process of appointing 10 members to sit on the board. There is “no known timeline” for the Audit and Advisory Committee’s investigation, Villarreal said last week.

[Update June 6: This article has been updated to include an apology statement from the A.S. Elections Board.]

Glad there’s a resolution to this. I had a feeling that this was a baseless attempt at a scandal to begin with. Why was that letter allowed to be published to begin with? Doesn’t AS have staff to approve such actions? They can be dealing with a lawsuit here

“Nonetheless, I am very disappointed in A.S. Elections Board and A.S. staff members for allowing these false accusations to be circulated to the campus community”

Yeah I fucking would be to if I was an IFC person. Somebody screwed the pooch big time.

Nah uh no they’re not!

Is this why the Senate tried to fire the staff Executive Director?