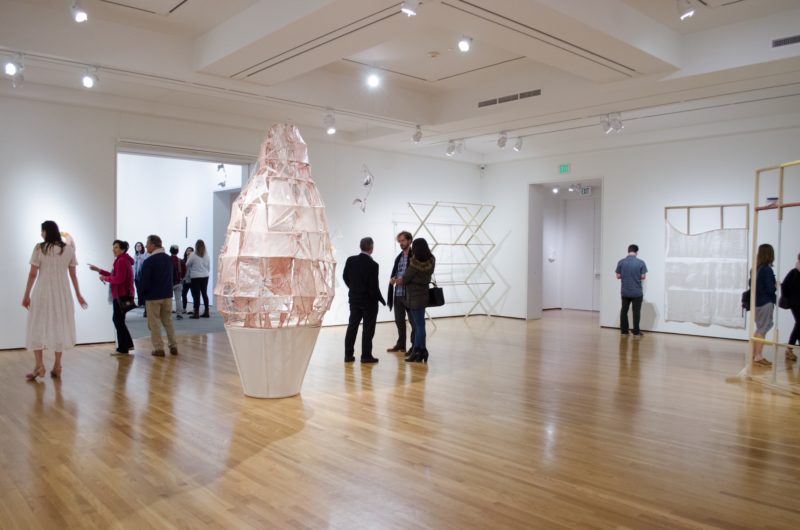 If you venture into the Art, Design & Architecture Museum on campus before Sunday the 29, you will find an array of paintings, sculptures and multi-media fixtures that fall decidedly in the category of abstract. Beginning on May 14, six art MFA graduate students at UCSB — Emily Baker, Vanesa Gingold, Morgan McAllister, Tom Pazderka, George Sanders and Shannon Willis — debuted their theses in an exhibition at the AD&A museum, which held a reception on Friday May 20. You can go and see the exhibits Wednesday through Sunday from 12 p.m. to 5 p.m. (8 p.m. on Thursday). If you’re worried about “not getting” any of it don’t worry, there’s a lot of variety and plenty of the art is just plain cool to look at.

The installations each entail several separate pieces, usually around five to seven per artist. They run the gamut with regard to subject and medium. Pazderka focuses chiefly on wood sculptures, found objects and charcoal drawings on tar paper. Pazerka’s exhibit revolves around famous (and infamous) individuals who spent time living in cabins in isolation. His subjects, each given a charcoal portrait in his piece “Freedom Club” range from the violent to the visionary. In “The Freedom Club Cabinet of Ted and Henry,” terrorist Ted Kaczynski (aka the Unabomber) shares a wooden fixture with transcendentalist author Henry David Thoreau. The piece, and the whole installation, suggests that madness and genius are linked. When asked about the message of his piece, Pazderka explained that he shied away from messages. 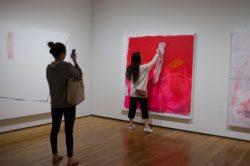 Yet, ideology is ever present in the artwork. Books like The Origins of Totalitarianism and Radovan Karadžić: The Architect of the Bosnian Genocide litter the wooden frames and cabinets of the fabricated cabin fragments Pazderka uses. And the artist’s aversion to propaganda becomes ironic considering one of the Freedom Club members is Leni Riefensctahl, the infamous Nazi propagandist director (even more so given that her most noted work is Triumph of the Will, regarded as a masterpiece of both propaganda and art).

Sanders’ exhibit features mainly sculptures, composed mostly of a few skeletal, architectural frames. There’s a clear emphasis on the line quality of the structures and the workmanship behind the materials. The constructions are made mostly of wood and rope, and demonstrate a contrast between the utility of these materials and the pure, non-functional aestheticism of the final art pieces. Sanders comes from a painting background, and several paintings accompany the sculptures. These images also depict the geometric gridlines that comprise the bulk of Sanders’ exhibit.

On the other end of the spectrum from this extensive sculpture-work is McAllister. McAllister has several paintings on the back wall of the gallery in addition to a few wall-mounted, three-dimensional pieces. The paintings encompass large swaths of wall space; dubbed “Eleutheromania,” they are fairly conventional abstract images, boasting mainly hues and splotches of white, pink and red.

Sharing the largest and most open museum space with McAllister and Sanders is Gingold. Gingold’s exhibit includes again mostly sculpture-work. Her surrealist-inspired pieces draw heavily on both the human body and insectoid structures. The acrylic, pigment and wood of the pieces “Private Viewing” and “Egg Case” all resemble bone and skin, or even possibly exoskeleton. A large centerpiece evokes a cocoon. Much of the material for this installation is abaca paper; the process of readying the abaca paper involves wetting it, beating it repeatedly and allowing it to dry and crack. The more severe the beating, the stronger and more translucent the material becomes. While Gingold’s pieces are abstract, they remain accessible. In some sense they’re delightful — all in shades of light pink and resembling mobiles you might put above a crib — in another way they manifest body horror straight out of David Cronenberg’s films, even evocative of Lovecraftian images.

Diverging from the fixed pieces of her peers, Willis’ installation contains mainly video feed, played on either flat-screen TV’s or projected onto the wall. The bulk of her exhibit takes place in a dark room in a piece called “Falling in Love While Drowning.” The installation focuses more on mood than it does physical aesthetics. The video screens project images of a distressed Willis along with a young girl playing. The feeds imply some sort of tragedy, and largely suggest symbolism of time and progression.

The final exhibit (although likely the first in sight upon entering the museum) entails both a sculptural and a performative element. Baker’s work is a tribute to movement and the human form. The centerpiece of the exhibit are the paint streaks on the wall that she left when she climbed up a gym rope covered in paint. The prints that her body left appear like large-lettered calligraphy in dark pigment in “The Ascent.” Surrounding the gym rope in the middle of the room are hip and knee replacements that Baker cast in bronze herself. Also prominent in the room is “Spinal Shift” a large, warped, yellow lattice-work made of latex, steel and bronze. Baker spoke to the Daily Nexus about the nature of risk in the performance (both physical and ego-wise).

“As a competitive gymnast you’re constantly showing and trying to be better, and to be better you have to be vulnerable, you have to allow criticism, which you have to do in art as well” Baker said. “There’s a lot of similarities in the gym that there is in the metal shop. You feel confident but you also might seriously injure yourself.”

She continues to perform (although, sadly, not the painted rope-climb) by hoisting herself upside-down on the pull-up bar in an impressive feat of athleticism in the piece “Quiet Practice.” She goes every day of the installation at 3:30 [[p.m.?]] If you go, she’ll converse with you — there’s no artificial “performance” style of non-interaction.

The overall verdict of the six theses is that while not every piece of every exhibit is amazing, many of them certainly are. Using many different forms and methods to cohere into unifying themes and symbols and images also creates a unique and immersive art-viewing experience. If you’re by the University Center, or on campus at all for the last few days of the exhibition, you would be wise to experience some amazing artistic talent and drop by the museum.