The Daily Nexus
Sports
Gauchos Score Two Road Victories at Irvine
May 23, 2016 at 5:00 am by Jorge Mercado

The No. 20 UCSB baseball team finished off its road season the right way by defeating UC Irvine in two out of three games this past weekend at Anteater Stadium. 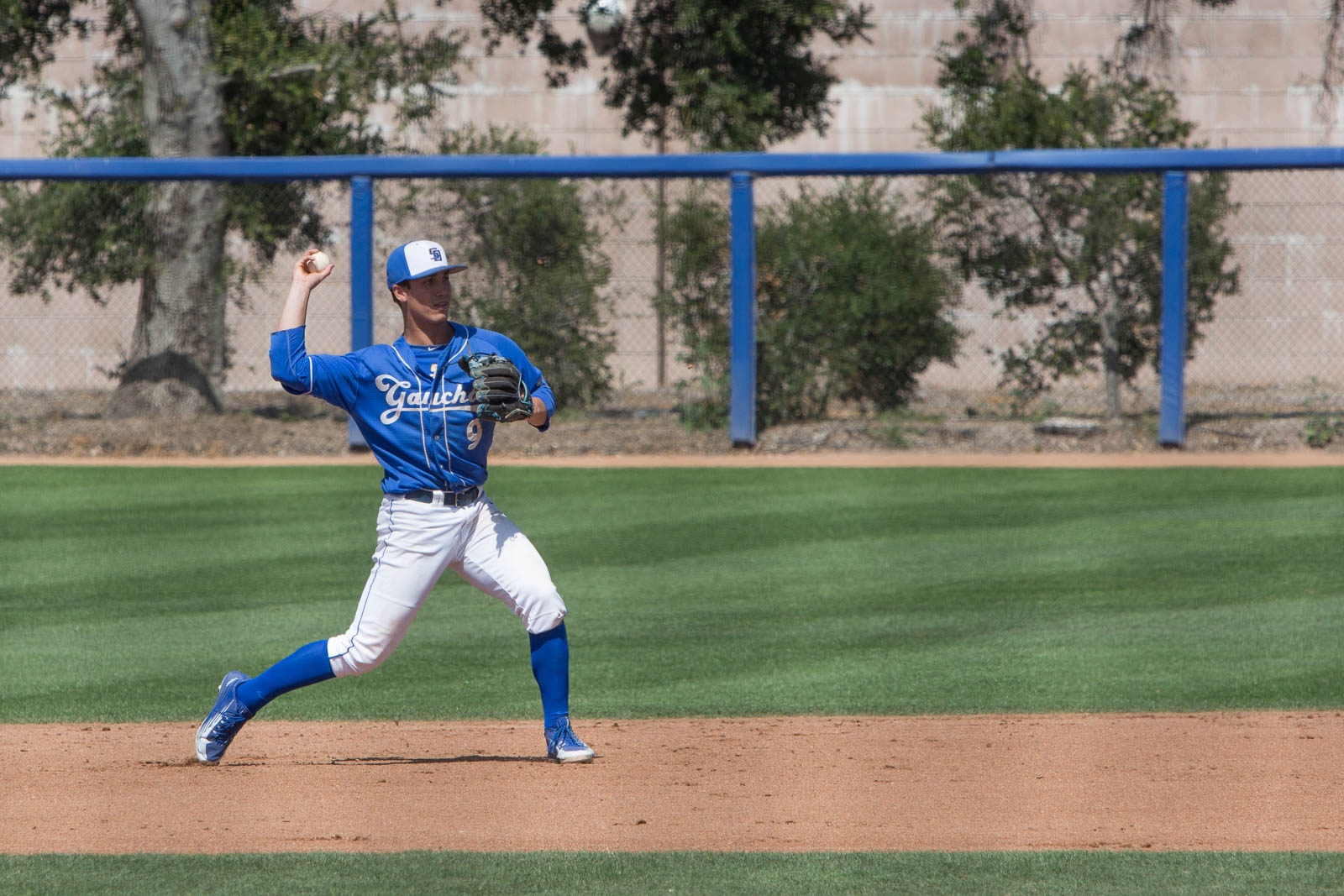 After fielding the ball, JJ Muno turns to throw it to first base. Dustin Harris / Daily Nexus

The Gauchos’ two wins and one loss puts their overall record at 35-16-1 overall and 12-9 in the conference and positions them with the opportunity to finish the season in third place.

The Anteaters fall to 29-24 on the season and 9-12 in Big West play, placing them in eighth place in the conference and, essentially eliminating their playoff hopes.

Santa Barbara was able to claim the series after a great comeback win in Sunday’s game and a great performance from bigtime hitter sophomore Austin Bush as he drove in seven RBI over the course of the game leading his team to a 9-5 victory.

UCI was able to take an early lead after scoring three runs in the first and two runs in the second to take a 5-0 lead. In the fourth inning, the Gauchos were finally able to get on the board after a Kyle Plantier RBI single that brought them within four runs.

After three more scoreless innings in the fifth, sixth and seventh, Bush finally struck in the eighth inning, hitting a grand slam to center field and tying the game up at five apiece. It was the first baseman’s seventh home run of the season and the first four-RBI homer of his young career.

That would end up being the final score of Sunday’s game after redshirt sophomore Kyle Nelson picked up his seventh win of the season, bouncing back from a tough loss the previous night as he struck out two of the last three batters.

Bush also became the first Gaucho to have a seven-RBI game in nearly 10 years as now UCSB assistant coach Chris Valaika hit seven against UC Davis on May 21, 2006.

Before clinching a tough road series victory, Santa Barbara suffered a heartbreaking 5-4 loss that came down to the final pitch and a throw from Muno that was just off.

The Gauchos were up 3-0 early after scoring two runs in the second and one run in the top of the third frame before UCI countered with three runs in the bottom of the fourth inning courtesy of sophomore infielder Cole Kreuter’s two-RBI triple and redshirt senior infielder Grant Palmer’s RBI sac fly.

The Anteaters then took the lead after junior Adam Alcantara drove in a run to make the score 4-3.

UCSB tied the game in the seventh inning thanks to redshirt junior Andrew Calica’s bunt, which scored Tevin Mitchell after a throwing error by the UCI pitcher.

After two scoreless innings, UC Irvine had a chance to win the game in regular innings as it had the final opportunity in the bottom of the ninth. After loading the bases thanks to a single, a walk and a hit batter, Alcantara had a chance to drive in the winning run to go home winners or hit into a double play that would end the inning.

The junior decided to go with the former and drove in John Brontsema to secure the 5-4 win. That, however, does not mean the play was not dramatic. Alcantara hit a line drive to left field, where third baseman Muno snagged it on a beautiful dive.

Then an off-balance Muno tried to throw the ball to home plate to get the runner out but it was a bit out of the catcher’s reach and Brontsema was able to score.

It was a heartbreaker for the Gauchos and for Nelson, who picked up his second loss in less than a week after starting the season with a perfect 6-0 record. However, the right-hander was able to bounce back in Sunday’s game, proving why he is on the watch list for the top pitcher in the country.

Before that gut-wrenching loss, UCSB was able to start the series off the right way and pick up a solid 10-3 victory to set the tone for the rest of the matches.

The scoring began in the top of the third, where UCSB picked up three runs thanks to Muno’s RBI single and Grover’s two-RBI single. UCI countered in the bottom of the frame with one run courtesy of Alcantara’s RBI single, making the score 3-1 after three innings.

Both teams scored two runs in the fourth inning to keep the lead the same for the Gauchos now at 5-3.  In the sixth, UCSB extended its lead by adding a run thanks to Mitchell’s RBI single.

In the seventh, Santa Barbara really did some damage, capitalizing on an error by UCI to score one run and a balk by the pitcher which scored another run, making the score 8-3.

Calica would drive in the final two runs in the same inning thanks to a single to right field, making the score 10-3. Both teams were unable to score after that, making the final score 10-3 in favor of the road team.

Junior Shane Bieber had another solid day at the office, allowing 11 hits and three earned runs but striking out 10 batters while pitching his fourth complete game of the season. Bieber (10-3) is now only the 12th pitcher in Gaucho history to reach 10 wins on the season.

It was a solid weekend overall for UCSB, whose season is coming to a close. It was a great way to end its average road record while also helping them pick up momentum as the playoffs approach.

The Gauchos’ next game is at Caesar Uyesaka Stadium against Gonzaga at 3 p.m. on Monday, May 23.